Slag-like glassy object found on surface of the Earth formed from rock melted by the impact of a meteorHow long Sonic booms Of the several 10s of tons of cosmic material entering Earth's atmosphere each day, only about one ton reaches the surface. An object's chance of survival depends on its initial mass, speed and angle of entry, and friability (tendency to break up). Micrometeoroids radiate heat so. This word is also applied to rocks that have been affected by impact (impact brecciaRock consisting of broken fragments of rock (clasts) cemented by a fine-grained matrix formed from regolith during subsequent impacts., sueviteTerrestrial breccia composed of angular fragments of different rock types and glass inclusions. Glass can make up more than half of the volume of suevite. Mineral grains in the rock fragments commonly display shock-metamorphic effects. Suevite was named after a rock found at the Ries Crater in southern Germany (photograph)., etc.) The backscattered electron  High energy primary electron that suffers large angle (> 90°) scattering and re-emerges from the entry surface of a specimen. Backscattered electrons usually have energies close to that of the primary electron beam. They are valuable in microanalysis because their number depends on the average atomic number of the photograph below shows the impactite’s complex internal structure. 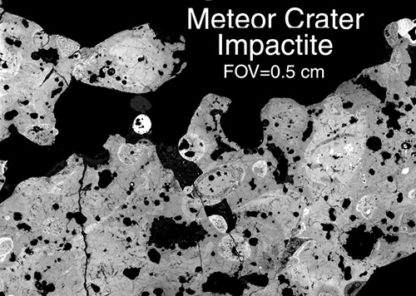