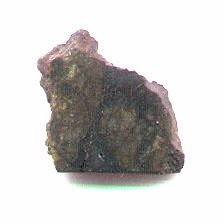 Found 1975
28° 41′ S., 141° 59′ E. A mass of 27 kg was found by a rabbit trapper 5 miles west of Corkwood Tank in Queensland, Australia. Naryilco was analyzed and classified at the Institut für Planetologie, University of Münster, Germany. The meteoriteWork in progress. A solid natural object reaching a planet’s surface from interplanetary space. Solid portion of a meteoroid that survives its fall to Earth, or some other body. Meteorites are classified as stony meteorites, iron meteorites, and stony-iron meteorites. These groups are further divided according to their mineralogy and is a brecciaWork in Progress ... A rock that is a mechanical mixture of different minerals and/or rock fragments (clasts). A breccia may also be distinguished by the origin of its clasts: (monomict breccia: monogenetic or monolithologic, and polymict breccia: polygenetic or polylithologic). The proportions of these fragments within the unbrecciated material composed of angular, cm-sized light and dark lithic clasts with shock veins, the result of prolonged impacts on its parent bodyThe body from which a meteorite or meteoroid was derived prior to its ejection. Some parent bodies were destroyed early in the formation of our Solar System, while others like the asteroid 4-Vesta and Mars are still observable today.. Subsequent impacts generated enough heat to cause minor melting along grain boundaries, fusing the different clasts together.

Naryilco is a transitional chondriteChondrites are the most common meteorites accounting for ~84% of falls. Chondrites are comprised mostly of Fe- and Mg-bearing silicate minerals (found in both chondrules and fine grained matrix), reduced Fe/Ni metal (found in various states like large blebs, small grains and/or even chondrule rims), and various refractory inclusions (such having characteristics of both L and LL chondriteOrdinary chondrites ("low Fe" / "low metal") with only 1 to 3% free metal. Their olivine is more Fe-rich than in the other ordinary chondrites (Fa27-32), implying that the LL types must have formed under more oxidizing conditions than their H or L cousins. Orthopyroxene compositions are also Fe-the rich groups; in particular, the Fa content of 26.4 mol% is within the upper range defined by other L/LL chondrite members. It has a Fs content of 22.1 mol%, but no Fs range has yet been determined for this transitional group. During their studies of chromite-encapsulated silicates in fossil meteorites, Alwmark and Schmitz (2009) determined the Fa and Fs values for Naryilco to be 24.3 mol% and 20.2 mol%, respectively, which places it within the L chondriteOrdinary chondrites low in free Ni-Fe metal (4 to 10 vol. %), containing olivine (Fa22-26) and the orthopyroxene hypersthene (Fs19-22). Average chondrule diameters (0.7 mm) are larger than those in H chondrites. The asteroid 433 Eros is suspected as a parent body, based on reflectance spectra, but most L chondrites range.