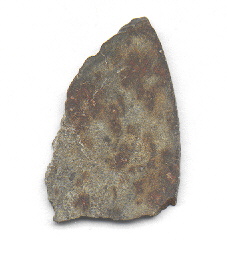 Found December 5, 1999
18° 20.7′ N., 54° 11.9′ E. A single 150 g stone was found on the surface of the desert in Oman. It was classified at the Vernadsky Institute (M. Ivanova) as an LL7, S3, W3 meteoriteWork in progress. A solid natural object reaching a planet’s surface from interplanetary space. Solid portion of a meteoroid that survives its fall to Earth, or some other body. Meteorites are classified as stony meteorites, iron meteorites, and stony-iron meteorites. These groups are further divided according to their mineralogy and. An identical 414 g stone designated Dhofar 014 was found nearby and is considered to be paired. FissionBreaking apart of a body into smaller fragments. In nuclear physics, fission refers to splitting of a heavy atomic nucleus into two or more lighter nuclei with an associated release of energy. The mass of the nucleus before fission is greater than the combined masses of the resulting fragments; the track thermochronometry indicates that type 7 chondritesChondrites are the most common meteorites accounting for ~84% of falls. Chondrites are comprised mostly of Fe- and Mg-bearing silicate minerals (found in both chondrules and fine grained matrix), reduced Fe/Ni metal (found in various states like large blebs, small grains and/or even chondrule rims), and various refractory inclusions (such cooled more slowly at greater depths than did those of lower petrologic types (Trieloff et al., 2003). Consequently, type 7 chondrites experienced a longer period of thermal metamorphism within this interior layer, and now exhibit extensively recrystallized textures that are transitional to an achondriteAn achondrite is a type of stony meteorite whose precursor was of chondritic origin and experienced metamorphic and igneous processes. They have a planetary or differentiated asteroidal origin where the chondritic parent body reached a sufficient size that through heating due to radioactive decay of 26Al (aluminum isotope) and gravitational classification. Type 7 ordinary chondrites were originally defined by Dodd et al. (1975) according to specific petrographic characteristics. They listed three metamorphicRocks that have recrystallized in a solid state due to changes in temperature, pressure, and chemical environment. criteria to distinguish between petrologic types 6 and 7:

In Dhofar 011, chondrules are virtually absent within the coarse-grained, thoroughly recrystallized matrixFine grained primary and silicate-rich material in chondrites that surrounds chondrules, refractory inclusions (like CAIs), breccia clasts and other constituents.. Furthermore, CaO in the low-Ca pyroxenes comprise 1.14 wt%. With reference to Dodd (1981), the classification of Dhofar 011 is consistent with that of type 7.

The Dhofar 011 meteorite may be paired with the 414 g LL7 Dhofar 014. The specimen of Dhofar 011 shown above is a 1.29 g partial slice. Pictured below is the main massLargest fragment of a meteorite, typically at the time of recovery. Meteorites are commonly cut, sliced or sometimes broken thus reducing the size of the main mass and the resulting largest specimen is called the "largest known mass". of Dhofar 011 as found in the rock-covered desert. 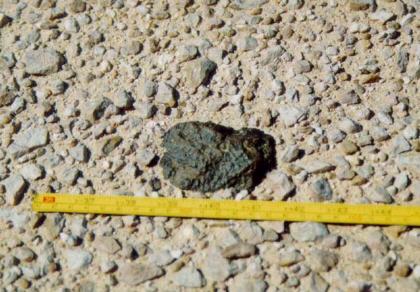