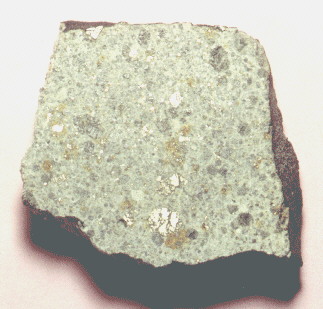 Found 1997
26° 58.20′ N., 16° 42.28′ E. A mass totaling 2,459 g was found on the Dar al Gani plateau in the eastern Sarir al Qattusah in central Libya, an area that covers ~12,000 km², of which ~8,000 km² are favorable for meteoriteWork in progress. A solid natural object reaching a planet’s surface from interplanetary space. Solid portion of a meteoroid that survives its fall to Earth, or some other body. Meteorites are classified as stony meteorites, iron meteorites, and stony-iron meteorites. These groups are further divided according to their mineralogy and recovery (Schlüter et al., 2002). The area of meteorite recovery lies on Tertiary limestoneA common form of calcium carbonate (CaCO3). Other common forms of CaCO3 include chalk and marble. marine sediments.

Diagram credit: Binzel et al., 47th LPSC, #1352 (2016) In their near-IR spectrographic study of asteroids located near the 3:1 orbital resonanceDynamic relationship between bodies in heliocentric orbits in which a small body has an orbital period that is a simple fraction of a nearby larger body such as Asteroid Belt objects and Jupiter. The periodic gravitational tug of the large body induces changes in the orbit of the smaller body (a Kirkwood gapLack of asteroids in regions within the asteroid belt (between Mars and Jupiter) coinciding with orbital periods that are simple fractions of Jupiter’s own orbital period. The absence of asteroids in these gaps is due to resonance with Jupiter’s gravitational influence.         associated with Jupiter), Fieber-Beyer et al. (2009) found that close similarities exist in the absorptionTransfer of energy to a medium as a particle or electromagnetic radiation passes through it. Absorption of electromagnetic radiation is the combined result of Compton scattering, σ, and photoelectric absorption, τ. It may be quantified: where, t = thickness, ρ = density, and μ = mass absorption coefficient, which combines Compton and photoelectric effects (μ = σ + τ). spectra of the S(IV) asteroid 974 Lioba and that of LL chondrites. Importantly, the recent touchdown of the Hayabusa spacecraft onto the surface of the sub-km-sized, S-type asteroid Itokawa has provided a wealth of knowledge about this most abundant type of asteroid. Itokawa’s reflectance spectrum reveals an olivineGroup of silicate minerals, (Mg,Fe)2SiO4, with the compositional endpoints of forsterite (Mg2SiO4) and fayalite (Fe2SiO4). Olivine is commonly found in all chondrites within both the matrix and chondrules, achondrites including most primitive achondrites and some evolved achondrites, in pallasites as large yellow-green crystals (brown when terrestrialized), in the silicate portion and pyroxeneA class of silicate (SiO3) minerals that form a solid solution between iron and magnesium and can contain up to 50% calcium. Pyroxenes are important rock forming minerals and critical to understanding igneous processes. For more detailed information, please read the Pyroxene Group article found in the Meteoritics & Classification category. composition very similar to that of known LL chondriteOrdinary chondrites ("low Fe" / "low metal") with only 1 to 3% free metal. Their olivine is more Fe-rich than in the other ordinary chondrites (Fa27-32), implying that the LL types must have formed under more oxidizing conditions than their H or L cousins. Orthopyroxene compositions are also Fe-the rich meteorites, such as DaG 298 (Abe et al., 2006). The mean Δ17O for the mineralogy of 25143 Itokawa is the same as that for LL or L chondrites (Yurimoto et al., 2011).

The photo shown above is a view of the southern hemisphere of asteroid Itokawa taken by the Japanese Space Agency (JAXA) Hayabusa spacecraft. It shows a surface largely strewn with angular boulders, many too large to have originated from impact craters present on Itokawa (e.g., the boulder ‘Yoshinodai’ measures 50 × 30 × 20 m in size; Demura et al., 2006) (see top photo below). By contrast, the lowest topographic areas, such as the touchdown/sample collection location in Muses Sea, are smoothly surfaced with cm-sized gravel (see bottom photo below), probably produced by grain-size sorting due to seismically-driven gravitational settling (Zolensky et al., 2013). The unusual double-lobed shape of Itokawa (~540 m in largest dimension), which is characterized by a constricted neck 20 m deep and up to 120 m wide, demonstrates that it is a low-density (1.90 ±0.13 g/cm³) contact binary formed by gravitational coalescence of separate portions of an impact-disrupted parent body—its structure is a rubble-pile with a macro-porosity of ~40%. New geothermometry results for LL meteorite samples obtained by Dygert et al. (2018) show that rapid cooling/quenching (≥1°C/yr) occurred near peak temperatures, which is consistent with a catastrophic breakup event. Other temperature data indicate that LL chondrites cooled much slower at lower temperatures (≤500°C), which is consistent with conditions at some depth in a reassembled rubble-pile. Sub-mm-sized particles of Itokawa returned by the Hayabusa spacecraft have been analyzed, and the mineralogy is consistent with that of an LL5–6 chondrite (Busemann et al., 2013). Evidence of space weathering is present in the form of nano-sized Fe and S phases. Noble gasElement occurring in the right-most column of the periodic table; also called "inert" gases. In these gases, the outer electron shell is completely filled, making them very unreactive. studies based on 21Ne indicate a CRE age of 3–8 m.y., based on a sample residence either on the surface or buried half a meter deep, respectively (Nagao et al., University of Tokyo). No melting was observed on any of the returned particles, which is consistent with low impact velocities on the parent asteroid of ~5 km per second (Tsuchiyama et al., 2011), but it is estimated by Busemann et al. (2013) that the rate of loss from the asteroid is relatively high. Continued analyses of the returned particles is ongoing.

Particles from asteroid Itokawa have compositions similar to LL-group ordinary chondrites that have experienced space weathering. Coarsened particles of plagioclaseAlso referred to as the plagioclase feldspar series. Plagioclase is a common rock-forming series of feldspar minerals containing a continuous solid solution of calcium and sodium: (Na1-x,Cax)(Alx+1,Si1-x)Si2O8 where x = 0 to 1. The Ca-rich end-member is called anorthite (pure anorthite has formula: CaAl2Si2O8) and the Na-rich end-member is albite and diopside are indicative of a high-temperature metamorphicRocks that have recrystallized in a solid state due to changes in temperature, pressure, and chemical environment. period (~800°C) that established a petrologic typeMeasure of the degree of aqueous alteration (Types 1 and 2) and thermal metamorphism (Types 3-6) experienced by a chondritic meteorite. Type 3 chondrites are further subdivided into 3.0 through 3.9 subtypes. of 5 to 6 (Nakamura et al., 2011). See also the article from PSRD ‘Samples from Asteroid Itokawa’, by G. J. Taylor and L. M. V. Martel, August, 2011.