LL6 Impact-Melt BrecciaWork in Progress ... A rock that is a mechanical mixture of different minerals and/or rock fragments (clasts). A breccia may also be distinguished by the origin of its clasts: (monomict breccia: monogenetic or monolithologic, and polymict breccia: polygenetic or polylithologic). The proportions of these fragments within the unbrecciated material
(LL6 in MetBull 62) 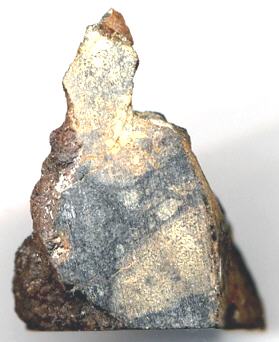 Found 1958
38° 18′ 24′ N., 99° 42′ 36′ W. Initially, a 3 kg fragment was reported to have been found in Rush County, Kansas, about 6.8 km N. of Bison (G. Huss, 1982). Subsequently, meteoriteWork in progress. A solid natural object reaching a planet’s surface from interplanetary space. Solid portion of a meteoroid that survives its fall to Earth, or some other body. Meteorites are classified as stony meteorites, iron meteorites, and stony-iron meteorites. These groups are further divided according to their mineralogy and recovery field work conducted by Terry Schmidt led to the recovery of another 8 kg fragment, a mass which had been found by a farmer in 1938 a few miles from the later 3 kg mass findMeteorite not seen to fall, but recovered at some later date. For example, many finds from Antarctica fell 10,000 to 700,000 years ago.. This larger mass was stored by the farmer under a work bench in his garage during the intervening years.