H5, impact-melt brecciaWork in Progress ... A rock that is a mechanical mixture of different minerals and/or rock fragments (clasts). A breccia may also be distinguished by the origin of its clasts: (monomict breccia: monogenetic or monolithologic, and polymict breccia: polygenetic or polylithologic). The proportions of these fragments within the unbrecciated material lithology 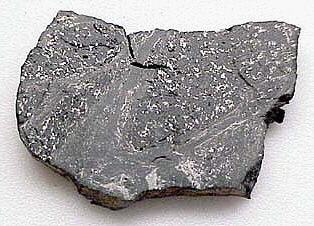 Fell March 5, 1960
11° 39′ N., 2° 11′ W. At about 5:00 in the afternoon, numerous stones fell in the West Africa country of Upper Volta (now Burkina Faso) near the villages of Gao and Guénie. Witnesses described an event in which stones bounced off the ground, trees were broken, and henhouses were destroyed. Many stones were recovered, the largest of which weighed 2.5 kg. Although most Gao-Guenie stones are unshocked to very weakly shocked (S1–S2) H5 chondritesChondrites are the most common meteorites accounting for ~84% of falls. Chondrites are comprised mostly of Fe- and Mg-bearing silicate minerals (found in both chondrules and fine grained matrix), reduced Fe/Ni metal (found in various states like large blebs, small grains and/or even chondrule rims), and various refractory inclusions (such exhibiting only minor brecciationThe formation of a breccia through a process by which rock fragments of of various types are recemented or fused together., a small number of specimens are fragmental breccias and some exhibit features reflecting a high degree (S6) of shock-melting (Schmieder et al., 2016). For example, a 570 g impact-melt stone was found in 1999 in a shipment of Gao-Guenie stones from Burkina Faso purchased by E. Olson, and a second impact-melt stone weighing 88 g was subsequently found in the same lot.

These impact-melt breccia stones contain olivineGroup of silicate minerals, (Mg,Fe)2SiO4, with the compositional endpoints of forsterite (Mg2SiO4) and fayalite (Fe2SiO4). Olivine is commonly found in all chondrites within both the matrix and chondrules, achondrites including most primitive achondrites and some evolved achondrites, in pallasites as large yellow-green crystals (brown when terrestrialized), in the silicate portion with the same Fa values (Fa19) as in other Gao-Guenie stones, and it is considered that they are all part of the same meteoriteWork in progress. A solid natural object reaching a planet’s surface from interplanetary space. Solid portion of a meteoroid that survives its fall to Earth, or some other body. Meteorites are classified as stony meteorites, iron meteorites, and stony-iron meteorites. These groups are further divided according to their mineralogy and fallMeteorite seen to fall. Such meteorites are usually collected soon after falling and are not affected by terrestrial weathering (Weathering = 0). Beginning in 2014 (date needs confirmation), the NomComm adopted the use of the terms "probable fall" and "confirmed fall" to provide better insight into the meteorite's history. If. Schmieder et al. (2016) studied one of the impact-melt breccia stones and identified a number of distinct textural zones: (i) chondrite-clast domain, (ii) quench melt domain, (iii) impact melt domain. The chondrite-clast domain comprises petrologic typeMeasure of the degree of aqueous alteration (Types 1 and 2) and thermal metamorphism (Types 3-6) experienced by a chondritic meteorite. Type 3 chondrites are further subdivided into 3.0 through 3.9 subtypes. 5 material from the H-chondrite host lithology. The shock-darkened quench melt domain is found adjacent to the chondrite-clast domain, and exhibits a cryptocrystallineCrypto meaning "hidden" refers to a rock texture in which individual crystals are too small to be distinguished even using a standard petrographic microscope. Crystals are typically less than a few μm in size - any smaller and the texture would be considered amorphous. Among sedimentary terrestrial rocks, chert and to microcrystalline, fluidal igneous texture. The impact melt domain has a microporphyritic igneous texture and contains relict silicateThe most abundant group of minerals in Earth's crust, the structure of silicates are dominated by the silica tetrahedron, SiO44-, with metal ions occurring between tetrahedra). The mesodesmic bonds of the silicon tetrahedron allow extensive polymerization and silicates are classified according to the amount of linking that occurs between the grains exhibiting shock features such as planar fractures and darkening, along with other shock-generated components including metalElement that readily forms cations and has metallic bonds; sometimes said to be similar to a cation in a cloud of electrons. The metals are one of the three groups of elements as distinguished by their ionization and bonding properties, along with the metalloids and nonmetals. A diagonal line drawn/troilite melt spherules, cm-sized vugs, and contraction cracks caused by rapid cooling. Based on petrographic and other evidence, Schmieder et al. (2016) concluded that this impact-melt phase represents an impact-injected melt dikePlanar, blade-like, intrusive igneous body that cuts across preexisting layers usually at a high-angle to near-vertical orientation. By definition, a dike is always younger than the rocks that contain it. Terrestrial dikes are typically 0.5 to 3 m wide and extend for a few 10s of kilometers. beneath the floor of a craterBowl-like depression ("crater" means "cup" in Latin) on the surface of a planet, moon, or asteroid. Craters range in size from a few centimeters to over 1,000 km across, and are mostly caused by impact or by volcanic activity, though some are due to cryovolcanism.. The cooling rate of the impact melt was calculated by them to have been ~10°C/s over the temperature interval ~2000–1100°C, with a slower rate of ~5000–40,000°C/yr below ~1000°C. In consideration of the cooling rate data and estimates of other parameters involving conductive cooling, they concluded that this dike was likely ~0.5–5 m in diameter. Radiometric chronometry was employed to date the melt and clastA mineral or rock fragment embedded in another rock. components of the breccia, establishing an age for the impact-melting event of 303 (±56) m.y. (Swindle et al., 2009). The typical CRE age determined for H chondrites of 5–10 m.y. could reflect isotopic clock resetting during a more recent impact event, while an even later impact event is attested by a CRE age of ~0.5–2 m.y. calculated for Gao-Guenie specimens (Schmieder et al., 2016 and references therein). This is the first case in which an impact melt phase was found to be associated with relatively unshocked material within the same fall, and it could provide valuable information on asteroid impact processes. The specimen shown above is a 3.64 g partial slice of the impact-melt phase of Gao-Guenie, which probably contains chondrite-clast domain with adjacent shock-darkened, fluidal quench melt veins. The photo below shows a representative sample (petrographic thin sectionThin slice or rock, usually 30 µm thick. Thin sections are used to study rocks with a petrographic microscope. LPL 1055,1) of the impact melt phase domains in Gao-Guenie .

Photo credit: Schmieder et al., MAPS, vol. 51, #6 (2016)
‘The Gao-Guenie impact melt breccia—Sampling a rapidly cooled impact melt dike on an H chondriteOrdinary chondrites with a high content of free Ni-Fe metal (15-19 vol. %) and attracted easily to a magnet. Their main minerals are olivine (Fa16-20) and the orthopyroxene bronzite (Fs14.5-18.5), earning them their older name of bronzite chondrites. Chondrules average ~0.3 mm in diameter. Comparison of the reflectance spectra of asteroid?’
(http://dx.doi.org/10.1111/maps.12642)