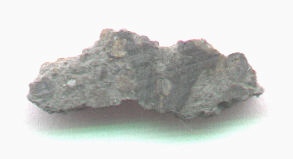 Found 1998
27° 16.76′ N., 16° 24.70′ W. A stone weighing 572 g was found in three separate pieces in the Libyan Sahara. It has a low shock stageA petrographic assessment, using features observed in minerals grains, of the degree to which a meteorite has undergone shock metamorphism. The highest stage observed in 25% of the indicator grains is used to determine the stage. Also called "shock level".               Click on Term to Read More of S1 and weathering grade of W1. It has been proposed that DaG 430 might be paired with DaG 429 (253 g), DaG 055, and DaG 056. The possibility of pairing with DaG 055, which is considered to be a CV3red–an (Clayton and Mayeda, 1999), opens up the possibility of a similar classification for DaG 430. In contrast with typical CV3 chondritesChondrites are the most common meteorites accounting for ~84% of falls. Chondrites are comprised mostly of Fe- and Mg-bearing silicate minerals (found in both chondrules and fine grained matrix), reduced Fe/Ni metal (found in various states like large blebs, small grains and/or even chondrule rims), and various refractory inclusions (such Click on Term to Read More, which are strongly oxidizedOxidation and reduction together are called redox (reduction and oxidation) and generally characterized by the transfer of electrons between chemical species, like molecules, atoms or ions, where one species undergoes oxidation, a loss of electrons,  while another species undergoes reduction, a gain of electrons. This transfer of electrons between reactants Click on Term to Read More and essentially free of metallic FeNi, tiny metalElement that readily forms cations and has metallic bonds; sometimes said to be similar to a cation in a cloud of electrons. The metals are one of the three groups of elements as distinguished by their ionization and bonding properties, along with the metalloids and nonmetals. A diagonal line drawn Click on Term to Read More flakes are present in DaG 430.

Arguments for and against a proposed unification of the CK and CV groups into a single group derived from a common parent bodyThe body from which a meteorite or meteoroid was derived prior to its ejection. Some parent bodies were destroyed early in the formation of our Solar System, while others like the asteroid 4-Vesta and Mars are still observable today. Click on Term to Read More can be found on the Dhofar 015 page. The specimen of DaG 430 shown above is a 0.45 g partial slice. A close-up of a large slice of DaG 430 exhibiting metal within chondrulesRoughly spherical aggregate of coarse crystals formed from the rapid cooling and solidification of a melt at  ~1400 ° C. Large numbers of chondrules are found in all chondrites except for the CI group of carbonaceous chondrites. Chondrules are typically 0.5-2 mm in diameter and are usually composed of olivine Click on Term to Read More that are imbedded in a light gray groundmass can be seen in the top photo below, while the bottom photo reveals an interesting dark inclusionFragment of foreign (xeno-) material enclosed within the primary matrix of a rock or meteorite. Click on Term to Read More in this meteoriteWork in progress. A solid natural object reaching a planet’s surface from interplanetary space. Solid portion of a meteoroid that survives its fall to Earth, or some other body. Meteorites are classified as stony meteorites, iron meteorites, and stony-iron meteorites. These groups are further divided according to their mineralogy and Click on Term to Read More. 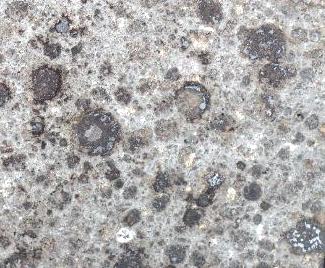 Photos by Walt Radomsky. Courtesy of R. A. Langheinrich Meteorites