Purchased August 2000
no coordinates recorded A single 604 g stone was purchased in a market in Erfoud, Morocco by American collectors in August 2000. Black fusion crustMelted exterior of a meteorite that forms when it passes through Earth’s atmosphere. Friction with the air will raise a meteorite’s surface temperature upwards of  4800 K (8180 °F) and will melt (ablate) the surface minerals and flow backwards over the surface as shown in the Lafayette meteorite photograph below. still covers the portion of the meteoriteWork in progress. A solid natural object reaching a planet’s surface from interplanetary space. Solid portion of a meteoroid that survives its fall to Earth, or some other body. Meteorites are classified as stony meteorites, iron meteorites, and stony-iron meteorites. These groups are further divided according to their mineralogy and that was exposed above the desert sands, while the buried portion is encrusted with desert calicheA hardened natural cement of calcium carbonate, CaCO3, binds other materials like gravels and sand. Caliche is generally light-colored, but can range from white (Northwest Africa) to reddish-brown (due to iron in the soil as found in Australia), depending on the impurities present. This caliche often encrusts meteorites found in. The meteorite was classified by Alan Rubin at UCLA as a CK5. Typical of CK chondritesChondrites are the most common meteorites accounting for ~84% of falls. Chondrites are comprised mostly of Fe- and Mg-bearing silicate minerals (found in both chondrules and fine grained matrix), reduced Fe/Ni metal (found in various states like large blebs, small grains and/or even chondrule rims), and various refractory inclusions (such, NWA 060 contains ~75 vol% matrixFine grained primary and silicate-rich material in chondrites that surrounds chondrules, refractory inclusions (like CAIs), breccia clasts and other constituents., 15 vol% chondrulesRoughly spherical aggregate of coarse crystals formed from the rapid cooling and solidification of a melt at  ~1400 ° C. Large numbers of chondrules are found in all chondrites except for the CI group of carbonaceous chondrites. Chondrules are typically 0.5-2 mm in diameter and are usually composed of olivine, and 0.5 vol% CAIsSub-millimeter to centimeter-sized amorphous objects found typically in carbonaceous chondrites and ranging in color from white to greyish white and even light pink. CAIs have occasionally been found in ordinary chondrites, such as the L3.00 chondrite, NWA 8276 (Sara Russell, 2016). CAIs are also known as refractory inclusions since they (Huber et al., 2006). A few vol% of magnetiteFe oxide, Fe2+Fe3+2O4, containing oxidized iron (Fe3+) found in the matrix of carbonaceous chondrites and as diagnostic component in CK chondrites. In CK chondrites, magnetite is typically chromian, containing several wt. % Cr2O3. is present as grains in the matrix, as curvilinear trails inside of silicates, and as components of small nodules. Minor sulfides, primarily pentlanditeFe-Ni sulfide, (Fe,Ni)9S8, that is often associated with troilite, and found in the matrix and chondrules of CO, CV, CK and CR chondrites. The color is yellow-bronze with light bronze-brown streak and metallic luster. It typically forms during cooling of magmatic sulfide melts during the evolution of parent silicate melt. The and pyrite, also occur. Regions exhibiting crushing were documented by Wasson et al. (2013).

A weathering index (wi) was developed by Rubin and Huber (2005) for the highly oxidizedOxidation and reduction together are called redox (reduction and oxidation) and generally characterized by the transfer of electrons between chemical species, like molecules, atoms or ions, where one species undergoes oxidation, a loss of electrons,  while another species undergoes reduction, a gain of electrons. This transfer of electrons between reactants meteorites, such as those of the R chondriteChondrites are the most common meteorites accounting for ~84% of falls. Chondrites are comprised mostly of Fe- and Mg-bearing silicate minerals (found in both chondrules and fine grained matrix), reduced Fe/Ni metal (found in various states like large blebs, small grains and/or even chondrule rims), and various refractory inclusions (such and equilibrated CV chondrite groups. This index is based on the modal abundance of brown-stained silicates as visually determined on a thin sectionThin slice or rock, usually 30 µm thick. Thin sections are used to study rocks with a petrographic microscope. in transmitted light at ~100× magnification; NWA 060 was determined to have an index of wi-5 (severely weathered). After in-depth analyses of many CV and CK meteorites having a wide range of petrologic types was conducted by Wasson et al. (2013), they presented a reasoned argument for merging the CK and CV groups into a single unified group. The geochemical and petrological justification for such a reclassification of the CK chondrites, along with details of their proposed taxonomic scheme, can be found on the Dhofar 015 page. Subsequent studies have demonstrated a high likelihood for separate parent bodies. One such study conducted by Dunn et al. (2016) compared magnetite in a number of CK and CV chondritesMeteorite class named after the Vigarano meteorite that fell in Italy in 1910. They have abundant large, well-defined rimless (?) chondrules of magnesium-rich olivine (~0.7 mm diameter; 40-65 vol. %), often surrounded by iron sulfide. They also contain 7-20 vol. % CAIs. The often dark-gray matrix is dominated by Fe-rich. They presented geochemical, mineralogical, and petrographic evidence which is more consistent with separate CV and CK parent bodies. Another study conducted by Yin et al. (2017) utilized a coupled Δ17O vs. ε54Cr diagram to plot several CK and CV chondrites. Through this technique they demonstrated that these two meteorite groups derive from separate parent bodies. Details of these studies can also be found on the Dhofar 015 page. The photo above shows a 0.7 g partial slice of NWA 060, while that below shows the complete mass as found. 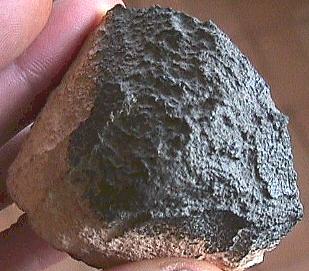