Found 1954
34° 27′ N., 111° 22′ W. A single large mass weighing 7.7 kg was found by a rancher named Jim Wingfield about 13 miles SW of Clover Springs in Gila County, Arizona. While setting out salt licks for his cattle, Jim picked up an odd looking rock that was ‘worth investigating’. It turned out to be a rare mesosiderite. The meteoriteWork in progress. A solid natural object reaching a planet’s surface from interplanetary space. Solid portion of a meteoroid that survives its fall to Earth, or some other body. Meteorites are classified as stony meteorites, iron meteorites, and stony-iron meteorites. These groups are further divided according to their mineralogy and was subsequently acquired by Harvey Nininger, who eventually sold the main massLargest fragment of a meteorite, typically at the time of recovery. Meteorites are commonly cut, sliced or sometimes broken thus reducing the size of the main mass and the resulting largest specimen is called the "largest known mass". to the British Museum of Natural History.

Clover Springs is a moderately metamorphosed mesosiderite, composed of a uniform Fe-metal matrixFine grained primary and silicate-rich material in chondrites that surrounds chondrules, refractory inclusions (like CAIs), breccia clasts and other constituents., containing broken silicateThe most abundant group of minerals in Earth's crust, the structure of silicates are dominated by the silica tetrahedron, SiO44-, with metal ions occurring between tetrahedra). The mesodesmic bonds of the silicon tetrahedron allow extensive polymerization and silicates are classified according to the amount of linking that occurs between the clasts dispersed throughout. MineralInorganic substance that is (1) naturally occurring (but does not have a biologic or man-made origin) and formed by physical (not biological) forces with a (2) defined chemical composition of limited variation, has a (3) distinctive set of of physical properties including being a solid, and has a (4) homogeneous clasts include Ca-poor pyroxeneA class of silicate (SiO3) minerals that form a solid solution between iron and magnesium and can contain up to 50% calcium. Pyroxenes are important rock forming minerals and critical to understanding igneous processes. For more detailed information, please read the Pyroxene Group article found in the Meteoritics & Classification category., plagioclaseAlso referred to as the plagioclase feldspar series. Plagioclase is a common rock-forming series of feldspar minerals containing a continuous solid solution of calcium and sodium: (Na1-x,Cax)(Alx+1,Si1-x)Si2O8 where x = 0 to 1. The Ca-rich end-member is called anorthite (pure anorthite has formula: CaAl2Si2O8) and the Na-rich end-member is albite, and olivineGroup of silicate minerals, (Mg,Fe)2SiO4, with the compositional endpoints of forsterite (Mg2SiO4) and fayalite (Fe2SiO4). Olivine is commonly found in all chondrites within both the matrix and chondrules, achondrites including most primitive achondrites and some evolved achondrites, in pallasites as large yellow-green crystals (brown when terrestrialized), in the silicate portion, the latter most likely of xenolithic origin (Hassanzadeh et al., 1990). Lithic clasts are predominantly plagioclase-rich, cumulateIgneous rock composed of crystals that have grown and accumulated (often by gravitational settling) in a cooling magma chamber. eucriteMost common type of achondrite meteorite and a member of the HED group. Eucrites are basalts composed primarily of pigeonite and anorthite (An60-98). Eucrites have been placed into three subgroups based on mineralogical and chemical differences. • Non-cumulate eucrites represent the upper crust that solidified on a magma ocean after fragments. As with all mesosiderites, Clover Springs has experienced low levels of shock, indicating a shock stageA petrographic assessment, using features observed in minerals grains, of the degree to which a meteorite has undergone shock metamorphism. The highest stage observed in 25% of the indicator grains is used to determine the stage. Also called "shock level".               of S1/S2. In the classification scheme of Floran (1978) and Hewins (1984), Clover Springs was assigned to metamorphicRocks that have recrystallized in a solid state due to changes in temperature, pressure, and chemical environment. group 2A (see the Bondoc page for further information about the grouping scheme). The specimen shown above is a 1.35 g partial slice with a fusion-crusted edge. The photo below is an excellent petrographic thin sectionThin slice or rock, usually 30 µm thick. Thin sections are used to study rocks with a petrographic microscope. micrograph of Clover Springs, shown courtesy of Peter Marmet. 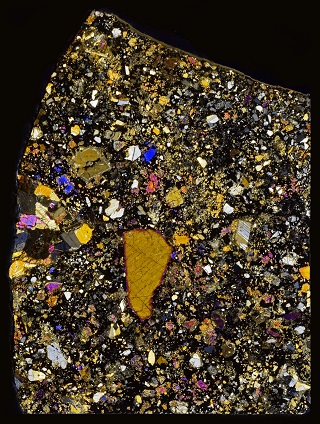