Enstatite AchondriteUsed in past as synonym for Aubrites. Present definition from the Meteoritical Bulletin states that this rare class is an "enstatite-rich  achondrite  that has not yet been classified into a group"., ungroupedModifying term used to describe meteorites that are mineralogically and/or chemically unique and defy classification into the group or sub-group they most closely resemble. Some examples include Ungrouped Achondrite (achondrite-ung), Ungrouped Chondrite (chondrite-ung), Ungrouped Iron (iron-ung), and Ungrouped Carbonaceous (C-ung). 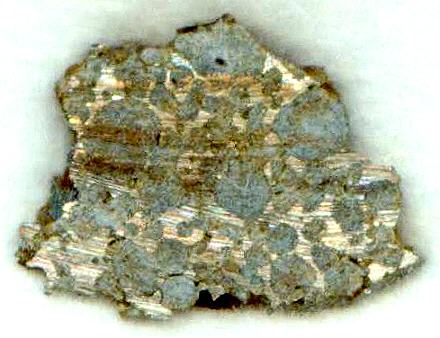 Thanks to Stephan Decker’s Meteorite Shop and Museum for providing specimens of this special meteorite and many of its xenolithic inclusions to the scientific and collector communities. The photo of MS-MU-036 shown above is a 0.24 g partial slice. The photo below highlights the high metal content in this enstatite achondrite, exhibiting a textural similarity to the EH7-an Itqiy (compare to Itqiy photo here).