Purchased 2012
no coordinates recorded A single stone weighing 168 g was purchased by A. Habibi in Morocco in 2012. Initial analysis and classification was conducted at University of New Mexico (C. Agee and K. Ziegler, UNM), and NWA 7891 was determined to be an anomalous member of the CV3 chondriteChondrites are the most common meteorites accounting for ~84% of falls. Chondrites are comprised mostly of Fe- and Mg-bearing silicate minerals (found in both chondrules and fine grained matrix), reduced Fe/Ni metal (found in various states like large blebs, small grains and/or even chondrule rims), and various refractory inclusions (such group. The meteoriteWork in progress. A solid natural object reaching a planet’s surface from interplanetary space. Solid portion of a meteoroid that survives its fall to Earth, or some other body. Meteorites are classified as stony meteorites, iron meteorites, and stony-iron meteorites. These groups are further divided according to their mineralogy and was subsequently sold to R. Garcia who then sold some specimens to collectors.

This meteorite was classified as anomalous due to its high variability in oxygenElement that makes up 20.95 vol. % of the Earth's atmosphere at ground level, 89 wt. % of seawater and 46.6 wt. % (94 vol. %) of Earth's crust. It appears to be the third most abundant element in the universe (after H and He), but has an abundance only isotopeOne of two or more atoms with the same atomic number (Z), but different mass (A). For example, hydrogen has three isotopes: 1H, 2H (deuterium), and 3H (tritium). Different isotopes of a given element have different numbers of neutrons in the nucleus. values and its low mean Fe/Mn value for olivineGroup of silicate minerals, (Mg,Fe)2SiO4, with the compositional endpoints of forsterite (Mg2SiO4) and fayalite (Fe2SiO4). Olivine is commonly found in all chondrites within both the matrix and chondrules, achondrites including most primitive achondrites and some evolved achondrites, in pallasites as large yellow-green crystals (brown when terrestrialized), in the silicate portion. The O-isotopic values plot on the CCAM line along an extension of the CV and CK trends (see diagram below). 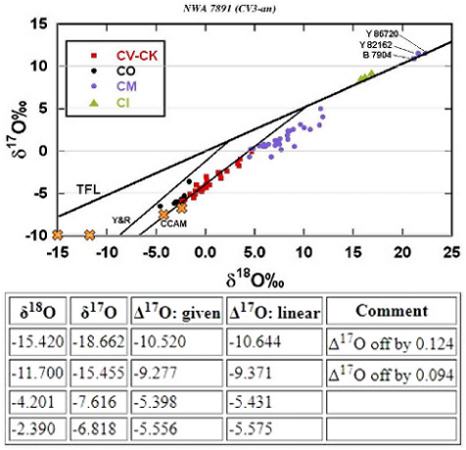 Diagram from Meteoritical Bulletin 102 In an effort to further resolve differences between the CV and CK chondriteClass of carbonaceous chondrite named for the Karoonda meteorite that fell in Australia in 1930. They are more oxidized than all other carbonaceous chondrites and genetically distinct from CV chondrites. CK chondrites appear dark-gray or black due to a high percentage of Cr-rich magnetite dispersed in a matrix of dark groups, Yin and Sanborn (2019) analyzed Cr isotopes in a significant number and broad range of meteorites. Their study included samples from each of the three CV subgroups (oxA, oxB, Red), two anomalous CV3 (NWA 6047 and NWA 7891), a C3-ungrouped (Ningqiang), several CK members, and other potential CV-related meteorites (see top diagram below). It is demonstrated that the CV and CK meteorites are clearly resolved into two distinct isotopic reservoirs. In addition, it is shown in the top diagram below that the ε54Cr value for NWA 6047 puts it in a distinct location compared to other CV group meteorites, and therefore it may represent a separate carbonaceous chondriteCarbonaceous chondrites represent the most primitive rock samples of our solar system. This rare (less than 5% of all meteorite falls) class of meteorites are a time capsule from the earliest days in the formation of our solar system. They are divided into the following compositional groups that, other than parent bodyThe body from which a meteorite or meteoroid was derived prior to its ejection. Some parent bodies were destroyed early in the formation of our Solar System, while others like the asteroid 4-Vesta and Mars are still observable today.. Furthermore, despite the varied classification history of Ningqiang, it can now be assigned to the CK group. A coupled Δ17O vs. ε54Cr diagram plotting all of the meteorites in the study is shown in the bottom diagram below. Notably, anomalous CV3 NWA 7891 (Δ17O = –7.7 [±4.5] ‰) plots far below the range considered in the bottom diagram. Cr Isotope Weighted Average For CV and CK ChondritesChondrites are the most common meteorites accounting for ~84% of falls. Chondrites are comprised mostly of Fe- and Mg-bearing silicate minerals (found in both chondrules and fine grained matrix), reduced Fe/Ni metal (found in various states like large blebs, small grains and/or even chondrule rims), and various refractory inclusions (such

click on photo for a magnified view Diagrams credit: Yin and Sanborn et al., 50th LPSC, #3023 (2019)
Further studies are needed to better resolve any genetic relationships that might exist between NWA 7891 and other anomalous and ungroupedModifying term used to describe meteorites that are mineralogically and/or chemically unique and defy classification into the group or sub-group they most closely resemble. Some examples include Ungrouped Achondrite (achondrite-ung), Ungrouped Chondrite (chondrite-ung), Ungrouped Iron (iron-ung), and Ungrouped Carbonaceous (C-ung). meteorites, as well as with the CV parent body. The specimen shown above is a small part slice weighing 0.29 g. The photo below shows the interior surface and weathered exterior of a 3.3 g end section, shown courtesy of R. Garcia.