click on photo for a magnified view Found 2011
no coordinates recorded A single fusionProcess in which two lighter atomic nuclei combine to form a heavier atomic nucleus. Very high temperatures are normally required in order for atomic nuclei to collide with sufficient energy to overcome the Coulomb barrier (their mutual electrostatic repulsions). Fusion that occurs under high-temperature conditions is called thermonuclear fusion. Fusion crusted stone weighing 224 g was found in Northwest Africa and subsequently sold to meteoriteWork in progress. A solid natural object reaching a planet’s surface from interplanetary space. Solid portion of a meteoroid that survives its fall to Earth, or some other body. Meteorites are classified as stony meteorites, iron meteorites, and stony-iron meteorites. These groups are further divided according to their mineralogy and dealer G. Hupé in Zagora, Morocco. A sample was submitted for analysis and classification to the University of Washington in Seattle (A. Irving and S. Kuehner), and NWA 7030 was determined to be a metachondriteTerm used to describe a metamorphosed chondrite. Also referred to as a type 7 chondrite. Metachondrites are texturally evolved rocks derived from chondritic precursors and some have been classified as primitive achondrites. with similarities to the LL chondriteOrdinary chondrites ("low Fe" / "low metal") with only 1 to 3% free metal. Their olivine is more Fe-rich than in the other ordinary chondrites (Fa27-32), implying that the LL types must have formed under more oxidizing conditions than their H or L cousins. Orthopyroxene compositions are also Fe-the rich group.

Northwest Africa 7030 is a texturally evolved meteorite that lacks any relict chondrulesRoughly spherical aggregate of coarse crystals formed from the rapid cooling and solidification of a melt at  ~1400 ° C. Large numbers of chondrules are found in all chondrites except for the CI group of carbonaceous chondrites. Chondrules are typically 0.5-2 mm in diameter and are usually composed of olivine, and it exhibits an overall texture akin to a fine-grained igneous cumulateIgneous rock composed of crystals that have grown and accumulated (often by gravitational settling) in a cooling magma chamber.. The predominant lithology was described as consisting of olivineGroup of silicate minerals, (Mg,Fe)2SiO4, with the compositional endpoints of forsterite (Mg2SiO4) and fayalite (Fe2SiO4). Olivine is commonly found in all chondrites within both the matrix and chondrules, achondrites including most primitive achondrites and some evolved achondrites, in pallasites as large yellow-green crystals (brown when terrestrialized), in the silicate portion, clinopyroxene, sodic plagioclaseAlso referred to as the plagioclase feldspar series. Plagioclase is a common rock-forming series of feldspar minerals containing a continuous solid solution of calcium and sodium: (Na1-x,Cax)(Alx+1,Si1-x)Si2O8 where x = 0 to 1. The Ca-rich end-member is called anorthite (pure anorthite has formula: CaAl2Si2O8) and the Na-rich end-member is albite, chromiteBrownish-black oxide of chromium and iron (Cr-Fe oxide), Cr2FeO4, found in many meteorite groups., troiliteBrass colored non-magnetic mineral of iron sulfide, FeS, found in a variety of meteorites. and taeniteLess common than kamacite, both taenite and kamacite are Ni-Fe alloys found in iron meteorites. Taenite, γ-(Fe,Ni), has 27-65 wt% Ni, and forms small crystals that appear as highly reflecting thin ribbons on the etched surface of a meteorite; the name derives from the Greek word for "ribbon.". A less prevalent greenish-colored, igneous-textured lithology is also present. Its composition is different from that of the primary lithology in that it contains interstitialTerm applied to ions or atoms occupying sites between lattice points. potassic-feldspar (sanidine) along with albitic plagioclase, and it contains much less troilite. Another difference is the presence of orthopyroxeneOrthorhombic, low-Ca pyroxene common in chondrites. Its compositional range runs from all Mg-rich enstatite, MgSiO3 to Fe-rich ferrosilite, FeSiO3. These end-members form an almost complete solid solution where Mg2+ substitutes for Fe2+ up to about 90 mol. % and Ca substitutes no more than ~5 mol. % (higher Ca2+ contents occur and rare kamaciteMore common than taenite, both taenite and kamacite are Ni-Fe alloys found in iron meteorites. Kamacite, α-(Fe,Ni), contains 4-7.5 wt% Ni, and forms large body-centered cubic crystals that appear like broad bands or beam-like structures on the etched surface of a meteorite; its name is derived from the Greek word in the minor lithology (Fernandes et al., 2014). The O-isotopic composition of NWA 7030 was analyzed at Okayama University (R. Tanaka) and it was shown to plot within the LL chondriteChondrites are the most common meteorites accounting for ~84% of falls. Chondrites are comprised mostly of Fe- and Mg-bearing silicate minerals (found in both chondrules and fine grained matrix), reduced Fe/Ni metal (found in various states like large blebs, small grains and/or even chondrule rims), and various refractory inclusions (such field. Bulk densityMass of an object divided by its volume. Density is a characteristic property of a substance (rock vs. ice, e.g.). Some substances (like gases) are easily compressible and have different densities depending on how much pressure is exerted upon them. The Sun is composed of compressible gases and is much measurements for NWA 7030 were conducted at the University of Central Florida (D. Britt [UCF]; B. Macke and G. Consolmagno [Vatican]) employing both pycnometer and glass bead methods (results forthcoming). Although NWA 7030 was shown to have affinities to the LL-chondrite group, it has many anomalous features that make it unique, and therefore, could be considered as ungroupedModifying term used to describe meteorites that are mineralogically and/or chemically unique and defy classification into the group or sub-group they most closely resemble. Some examples include Ungrouped Achondrite (achondrite-ung), Ungrouped Chondrite (chondrite-ung), Ungrouped Iron (iron-ung), and Ungrouped Carbonaceous (C-ung).. The K–Ar age was determined for the minor lithology, and the results indicate the occurrence of two separate impact heating/degassing events that have disturbed this isotopic chronometer: one at ~4.12 b.y. and the other at ~2.39 b.y. (Fernandes et al., 2014). The specimen of NWA 7030 shown above is a 0.77 g end section. The top photo below shows the fresh fusion-crusted mass, while the bottom photo shows the interior of a 15.62 g slice with both lithologies—photos courtesy of Greg Hupé. 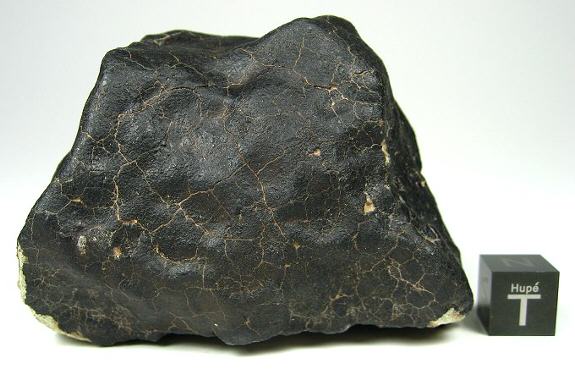 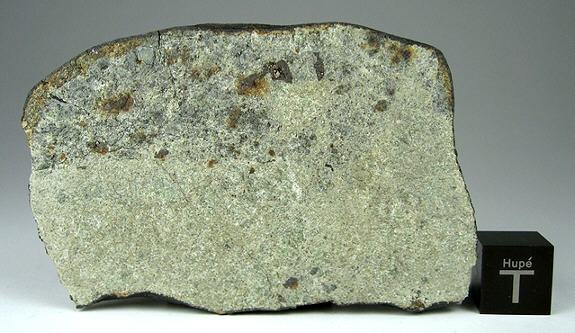