Martian ShergottiteIgneous stony meteorite with a Martian origin consisting mainly of plagioclase (or a shocked glass of plagioclase composition) and pyroxene. They are the most abundant type of SNC meteorites and the type member is the Shergotty meteorite, which fell in India in 1865. Shergottites are igneous rocks of volcanic or
olivine–orthopyroxene-phyric ∗
(depleted, permafic, reducedOxidation and reduction together are called redox (reduction and oxidation) and generally characterized by the transfer of electrons between chemical species, like molecules, atoms or ions, where one species undergoes oxidation, a loss of electrons,  while another species undergoes reduction, a gain of electrons. This transfer of electrons between reactants) 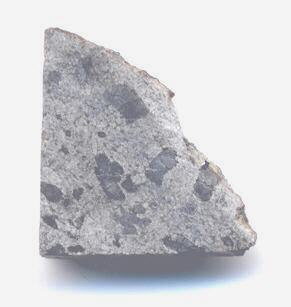 The shergottite NWA 2046 contains abundant zoned olivineGroup of silicate minerals, (Mg,Fe)2SiO4, with the compositional endpoints of forsterite (Mg2SiO4) and fayalite (Fe2SiO4). Olivine is commonly found in all chondrites within both the matrix and chondrules, achondrites including most primitive achondrites and some evolved achondrites, in pallasites as large yellow-green crystals (brown when terrestrialized), in the silicate portion and orthopyroxeneOrthorhombic, low-Ca pyroxene common in chondrites. Its compositional range runs from all Mg-rich enstatite, MgSiO3 to Fe-rich ferrosilite, FeSiO3. These end-members form an almost complete solid solution where Mg2+ substitutes for Fe2+ up to about 90 mol. % and Ca substitutes no more than ~5 mol. % (higher Ca2+ contents occur crystals exhibiting a preferred alignment indicative of magmatic flow and/or crystal accumulation. Although it is similar in many respects to the primitive shergottitesIgneous stony meteorite with a Martian origin consisting mainly of plagioclase (or a shocked glass of plagioclase composition) and pyroxene. They are the most abundant type of SNC meteorites and the type member is the Shergotty meteorite, which fell in India in 1865. Shergottites are igneous rocks of volcanic or NWA 1195 and DaG 476/489, both previously classified as olivine-phyric shergottites, NWA 2046 has olivine megacrysts that are more strongly zoned and have more magnesian cores (Fo84.3) with more ferroan rims. The highly magnesian nature of the olivine megacryst cores is consistent with an origin from a less evolved magmaMolten silicate (rock) beneath the surface of a planetary body or moon. When it reaches the surface, magma is called lava. source region, which was at the same time depleted in incompatible elements (LREE). The crystal faces of the megacrysts in NWA 2046 are better defined than those in NWA 1195, and are more consistent with a phenocrystic rather than xenocrystic origin.

A new shergottite subgroup name was proposed to distinguish these unique meteorites—olivine–orthopyroxene-phyric (Irving et al., 2004). Northwest Africa 2046 is a very primitive martian meteoriteOver 30 of the meteorites found on Earth almost certainly came from Mars (see http://www.imca.cc/mars/martian-meteorites.htm and http://www2.jpl.nasa.gov/snc/). All but one belongs to the group known as SNC meteorites, which includes the shergottites, nakhlites, and chassignites. SNC meteorites contain minerals that crystallized within the past 1.35 to 0.15 Ga, making them with similarities to the olivine-phyric shergottite Y-980459 (containing olivine cores with a more magnesian composition of Fo86, and lacking plagioclaseAlso referred to as the plagioclase feldspar series. Plagioclase is a common rock-forming series of feldspar minerals containing a continuous solid solution of calcium and sodium: (Na1-x,Cax)(Alx+1,Si1-x)Si2O8 where x = 0 to 1. The Ca-rich end-member is called anorthite (pure anorthite has formula: CaAl2Si2O8) and the Na-rich end-member is albite [Mikouchi et al., 2003]). These zoning features of NWA 2046 suggest that it was derived from a very primitive source magma and experienced rapid cooling.

The formation of NWA 2046 and some other depleted shergottites has been successfully modeled by a fractional crystallizationA crystallization process in which minerals crystallizing from a magma are isolated from contact with the liquid. It is a key process in the formation of igneous rocks during the process of magmatic differentiation. Also known as crystal fractionation. process based on a parental magma source having a composition similar to that of the most primitive, magnesian shergottite, Y-980459 (Symes et al., 2008). It was demonstrated that 43% fractionationConcentration or separation of one mineral, element, or isotope from an initially homogeneous system. Fractionation can occur as a mass-dependent or mass-independent process. can cause the melt to progress from a primitive Y-980459-like composition to that of the most evolved composition represented by QUE 94201. This fractionation hypothesis is in contrast to the most commonly discussed hypothesis cited to explain the compositional variation within the shergottite group, which calls for the assimilation of differing proportions of evolved crustal material by a common parental magma.

Other shergottites having close to very similar REEOften abbreviated as “REE”, these 16 elements include (preceded by their atomic numbers): 21 scandium (Sc), 39 Yttrium (Y) and the 14 elements that comprise the lanthanides excluding 61 Promethium, an extremely rare and radioactive element. These elements show closely related geochemical behaviors associated with their filled 4f atomic orbital. depletions, Sr–Nd isotopic compositions, and old crystallizationPhysical or chemical process or action that results in the formation of regularly-shaped, -sized, and -patterned solid forms known as crystals. ages (e.g., Y-980459, SaU 005/008, Dhofar 019, QUE 94201, DaG 476, NWA 1195, and NWA 480/1460) might share some aspects of their petrogenetic history. For example, the Sm–Nd isotopic data for NWA 1195 reflects a crystallization age of 347 (±13) m.y., very similar to that of the basaltic shergottite QUE 94201; however, these two shergottites are not isotopically related (Symes et al., 2005, 2008).

A new classification scheme for the shergottites (and ‘lherzolites’) based on REE patterns and trace elementSubstance composed of atoms, each of which has the same atomic number (Z) and chemical properties. The chemical properties of an element are determined by the arrangement of the electrons in the various shells (specified by their quantum number) that surround the nucleus. In a neutral atom, the number of systematics such as Sr–Nd has been proposed by Symes et al. (2008) and expanded upon by Bunch et al. (2008) and Shih et al. (2009). The new classification scheme shown is based on the Mg# of a sample indicating the extent of evolution of the parent magma, along with the initial εNd which serves as a measure of the enrichment or depletion of the source composition.

Using spectral data obtained from the Viking and Pathfinder Mars landers, it was proposed that the olivine–orthopyroxene-phyric meteorites are compositionally similar to certain rocks analyzed on the martian surface—the high-silica andesites. These silica-rich rocks are analogous to terrestrial boninites (SiO2 >53%, MgO >8%, and TiO2 <0.5%), and both of these rock types may have experienced a similar petrogenesis. They suggested a possible process for the formation of olivine-phyric shergottite magmas: partial meltingAn igneous process whereby rocks melt and the resulting magma is comprised of the remaining partially melted rock (sometimes called restite) and a liquid whose composition differs from the original rock. Partial melting occurs because nearly all rocks are made up of different minerals, each of which has a different melting and dehydration of hydrous harzburgitic peridotite as a result of the heat from rising mantleMain silicate-rich zone within a planet between the crust and metallic core. The mantle accounts for 82% of Earth's volume and is composed of silicate minerals rich in Mg. The temperature of the mantle can be as high as 3,700 °C. Heat generated in the core causes convection currents in plumes.

The groundmass of NWA 2046 has a coarse texture that consists of well-developed, Mg-rich, orthopyroxene megacrysts, some of which measure ~2mm in length. A petrofabric analysis revealed a preferred orientation among the orthopyroxene and olivine megacrysts, presumably reflecting their entrainment within a magma flow, perhaps in a shallow dikePlanar, blade-like, intrusive igneous body that cuts across preexisting layers usually at a high-angle to near-vertical orientation. By definition, a dike is always younger than the rocks that contain it. Terrestrial dikes are typically 0.5 to 3 m wide and extend for a few 10s of kilometers., although a cumulateIgneous rock composed of crystals that have grown and accumulated (often by gravitational settling) in a cooling magma chamber. origin is possible.

Estimates of the crustal thickness of Mars give a range of ~30–100 km, with an average thickness of ~50 km; this is equivalent to ~3% of the planetary mass. The crustal composition of Mars is enriched in moderately volatileSubstances which have a tendency to enter the gas phase relatively easily (by evaporation, addition of heat, etc.). large-ion lithophiles (e.g. K, Rb, and Cs), refractory large-ion lithophiles (e.g. Th and U), and in large rare earth elementsOften abbreviated as “REE”, these 16 elements include (preceded by their atomic numbers): 21 scandium (Sc), 39 Yttrium (Y) and the 14 elements that comprise the lanthanides excluding 61 Promethium, an extremely rare and radioactive element. These elements show closely related geochemical behaviors associated with their filled 4f atomic orbital. (e.g. La), values which are complementary to a large-ion lithophile depletion in the mantle (McLennan, 2003). This is evidenced by the LREE/REE/Nd-isotopic compositions of basaltic shergottites, the values of which are consistent with the derivation of basaltic shergottites from a highly depleted mantle source that experienced mixing and assimilation of an LREE-enriched crustal component. An alternative model proposed by Symes et al. (2008) suggests that fractional crystallization is responsible for the compositional variability among the shergottites. In an effort by another investigator to account for the chondritic elemental proportions that are assumed to have been present on Mars initially, in particular, to explain the low La/Th ratios found in shergottites, the existence of an additional unsampled, primitve mantle reservoir was proposed. Since certain nakhlites contain a relatively high La content, they may in fact sample this reservoir.

The photo of NWA 2046 shown above is a 0.44 g partial slice. The top photo below shows the complete mass as found, while the middle photo shows a complete slice that exhibits abundant olivine megacrysts embedded within a groundmass consisting of pyroxeneA class of silicate (SiO3) minerals that form a solid solution between iron and magnesium and can contain up to 50% calcium. Pyroxenes are important rock forming minerals and critical to understanding igneous processes. For more detailed information, please read the Pyroxene Group article found in the Meteoritics & Classification category. and maskelyniteNatural glass composed of isotropic plagioclase produced during shock metamorphism (not melting) at pressures of ~30 GPa. Maskelynite is commonly found in shergottites though also found in some ordinary chondrites, HED and lunar meteorites. It is also found in association with meteorite impact craters and crater ejecta. Named after British, along with other minor constituents. The bottom photo shows a thin sectionThin slice or rock, usually 30 µm thick. Thin sections are used to study rocks with a petrographic microscope. viewed in both plane light and polarized light. 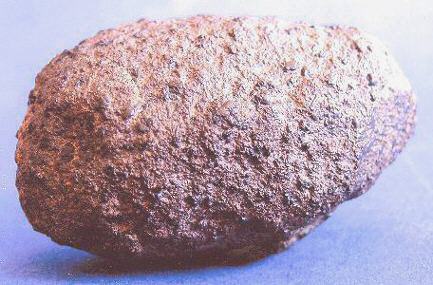 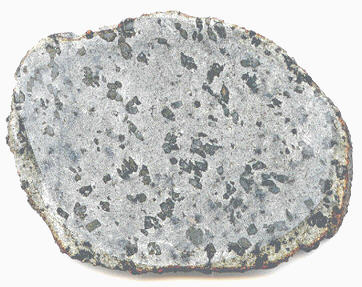 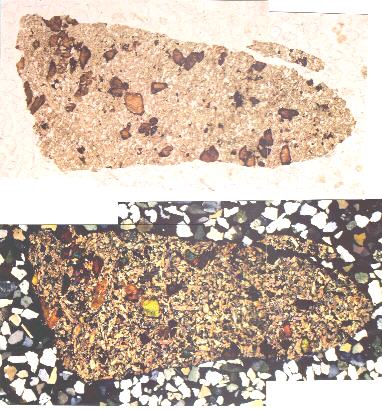