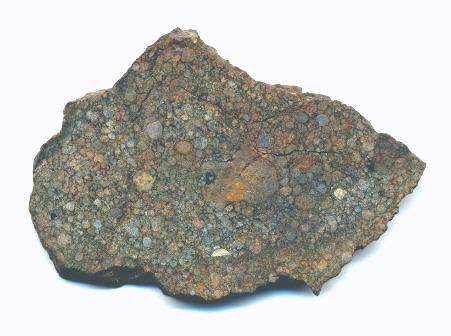 Found 2002
no coordinates recorded Several fragments totaling ~2 kg were recovered in the Sahara Desert and subsequently purchased by an American dealer in early 2003. Northwest Africa 1955 was classified at Planetary Studies Foundation (P. Siperia) as the first H/L3–4 chondriteChondrites are the most common meteorites accounting for ~84% of falls. Chondrites are comprised mostly of Fe- and Mg-bearing silicate minerals (found in both chondrules and fine grained matrix), reduced Fe/Ni metal (found in various states like large blebs, small grains and/or even chondrule rims), and various refractory inclusions (such. Other members of this intermediate group include Famenin [3.8–3.9], Tieschitz [3.6], Bremervörde [3.9], Haxtun [4], Y-74645 [4], and Yamato 8424. Initial studies indicate that Dhofar 008 might also belong to this group. The specimen of NWA 1955 shown above is an 8.4 g partial slice. The photo below shows the 389 g main massLargest fragment of a meteorite, typically at the time of recovery. Meteorites are commonly cut, sliced or sometimes broken thus reducing the size of the main mass and the resulting largest specimen is called the "largest known mass".. 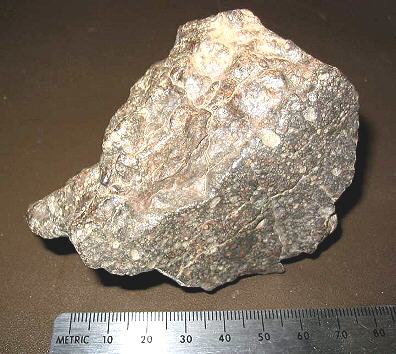