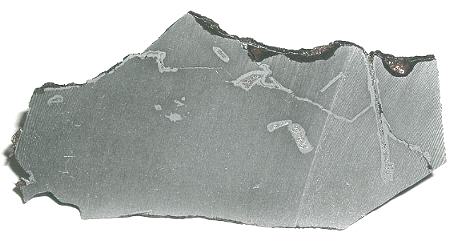 Found 1916
28° 2′ S., 117° 58′ E. Two fragments constituting a single sickle-shaped mass having a combined weight of 16.5 kg were found in Western Australia, about 10 km east of Mount Magnet (Buchwald, 1975). The mass exhibits significant terrestrial weathering with no evidence of fusion crustMelted exterior of a meteorite that forms when it passes through Earth’s atmosphere. Friction with the air will raise a meteorite’s surface temperature upwards of  4800 K (8180 °F) and will melt (ablate) the surface minerals and flow backwards over the surface as shown in the Lafayette meteorite photograph below. or heat-affected zone. Mount Magnet is classified structurally as a plessitic octahedriteMost Common type of iron meteorite, composed mainly of taenite and kamacite and named for the octahedral (eight-sided) shape of the kamacite crystals. When sliced, polished and etched with an acid such as nitric acid, they display a characteristic Widmanstätten pattern. Spaces between larger kamacite and taenite plates are often (Opl) with kamaciteMore common than taenite, both taenite and kamacite are Ni-Fe alloys found in iron meteorites. Kamacite, α-(Fe,Ni), contains 4-7.5 wt% Ni, and forms large body-centered cubic crystals that appear like broad bands or beam-like structures on the etched surface of a meteorite; its name is derived from the Greek word needles of a few µm in size. This iron was initially classified as geochemically anomalous, but has since been included in the high-Au, high-Ni subgroup (sHH) of the IAB complex (Wasson and Kallemeyn, 2002).

In a study involving Mo and W isotopeOne of two or more atoms with the same atomic number (Z), but different mass (A). For example, hydrogen has three isotopes: 1H, 2H (deuterium), and 3H (tritium). Different isotopes of a given element have different numbers of neutrons in the nucleus. compositions for the IAB complex, Worsham et al. (2017) determined that the Mo isotopic composition of the sHL and sHH subgroups are identical, but differ from that of the sLL, sLM, and sLH subgroups. Moreover, they calculated the formation ages of these irons based on W isotopes, and determined that the sHL and sHH subgroups formed significantly earlier than the MG, sLL, and sLM subgroups. From this study they concluded that the MG and the sLL, sLM, and sLH subgroups formed in distinct impact-melt pools on at least two distinct asteroids, whereas the sHL and sHH subgroups formed by fractional crystallizationA crystallization process in which minerals crystallizing from a magma are isolated from contact with the liquid. It is a key process in the formation of igneous rocks during the process of magmatic differentiation. Also known as crystal fractionation. associated with coreIn the context of planetary formation, the core is the central region of a large differentiated asteroid, planet or moon and made up of denser materials than the surrounding mantle and crust. For example, the cores of the Earth, the terrestrial planets and differentiated asteroids are rich in metallic iron-nickel. formation resulting from internal radiogenic heating on one or more separate parent bodies (see schematic diagram below).

Diagram credit: Worsham et al., Earth and Planetary Science Letters, vol. 467, p. 164 (2017)
‘Characterizing cosmochemical materials with genetic affinities to the Earth: Genetic and chronological diversity within the IAB iron meteoriteMeteorite composed mainly of iron (Fe) and nickel (Ni) in the form of two alloys, kamacite and taenite. Due to their metallic makeup and extraordinary weight, iron meteorites are easily distinguished from ordinary rocks. Also, because they rarely break up in the air and suffer much less from the effects complex’
(https://doi.org/10.1016/j.epsl.2017.02.044) In a study of the IAB subgroups, employing precise Mo, W, and Os isotope data along with HSE and other literature data, Worsham et al. (2017) ascertained that the three sHH irons in the study (ALHA80104, Kofa, and Mount Magnet) have indistinguishable µ97Mo isotopic compositions with an average value of 24 (±3). 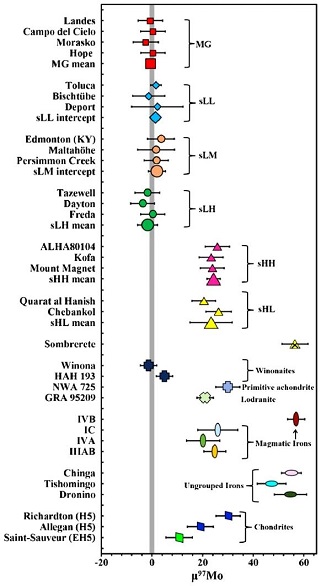 click on photo for a magnified view Diagram credit: Worsham et al., Earth and Planetary Science Letters, vol. 467, p. 160 (2017)
‘Characterizing cosmochemical materials with genetic affinities to the Earth: Genetic and chronological diversity within the IAB iron meteoriteWork in progress. A solid natural object reaching a planet’s surface from interplanetary space. Solid portion of a meteoroid that survives its fall to Earth, or some other body. Meteorites are classified as stony meteorites, iron meteorites, and stony-iron meteorites. These groups are further divided according to their mineralogy and complex’
(https://doi.org/10.1016/j.epsl.2017.02.044) In another analysis of siderophile elements in IAB irons, Worsham et al. (2016) revealed that Mount Magnet has a more fractionated HSE pattern compared to the other two sHH samples in their study, Kofa and ALHA80104, both of which have nearly identical HSE patterns and which are somewhat similar to two late-crystallized IIIB irons (see diagram below, where Grant is a dashed line and Chupaderos is a dotted line). Based on this analysis, they suggest that Mount Magnet may have formed from a distinct parental melt on a common parent bodyThe body from which a meteorite or meteoroid was derived prior to its ejection. Some parent bodies were destroyed early in the formation of our Solar System, while others like the asteroid 4-Vesta and Mars are still observable today.. 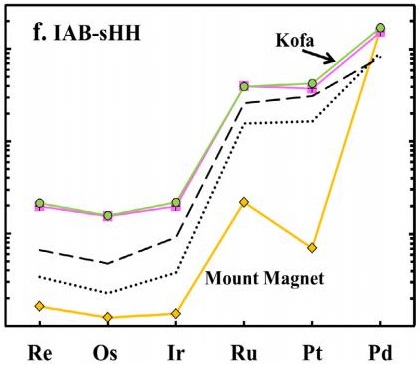 Diagram credit: Worsham et al., GCA, vol. 188, p. 268 (2016)
‘Siderophile elementLiterally, "iron-loving" element that tends to be concentrated in Fe-Ni metal rather than in silicate; these are Fe, Co, Ni, Mo, Re, Au, and PGE. These elements are relatively common in undifferentiated meteorites, and, in differentiated asteroids and planets, are found in the metal-rich cores and, consequently, extremely rare on systematics of IAB complex iron meteorites: New insights into the formation of an enigmatic group’
(https://doi.org/10.1016/j.gca.2016.05.019) The interior structure of Mount Magnet is ataxitic, containing numerous ribbons of schreibersiteNi-Fe phosphide mineral, (Fe,Ni)3P, yellowish in color and predominantly found in iron and stony-iron meteorites. Schreibersite can also be found in a variety of other meteorites including some acapulcoites, aubrites, enstatite chondrites and achondrites, lunars, ureilites, winonaites and a smattering of other meteorite types like CM, CO and CB. Schreibersite, small grains and clusters of silicates, and monocrystalline grains of troilite—each of these inclusions are often rimmed by kamacite. Both small pockets and skeletal crystals of schreibersite are also present, the former usually surrounded by wide kamacite rims. To learn more about the relationships within the IAB complex and among other iron chemical groups, see the Appendix, Part III. The photo shown above is an 11.32 g partial slice of Mount Magnet.