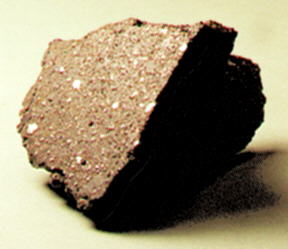 Fell August 21, 1991
18° 42′ N., 4° 48′ E. On an August afternoon, a seven-year-old Tuareg boy witnessed the fallMeteorite seen to fall. Such meteorites are usually collected soon after falling and are not affected by terrestrial weathering (Weathering = 0). Beginning in 2014 (date needs confirmation), the NomComm adopted the use of the terms "probable fall" and "confirmed fall" to provide better insight into the meteorite's history. If of a 110 kg stone in Tahoua, Republic of Niger. This is a uniquely unshocked (S1) meteoriteWork in progress. A solid natural object reaching a planet’s surface from interplanetary space. Solid portion of a meteoroid that survives its fall to Earth, or some other body. Meteorites are classified as stony meteorites, iron meteorites, and stony-iron meteorites. These groups are further divided according to their mineralogy and with high porosityThe volume percentage of a rock that consists of void space. Vesicular porosity is a type of porosity resulting from the presence of vesicles, or gas bubbles, in igneous rock such as the pumice presented here. Vesicular porosity is very rare in meteorites and is often associated with slag, one and large vugs containing crystals of silicates, troiliteBrass colored non-magnetic mineral of iron sulfide, FeS, found in a variety of meteorites., and FeNi-metal. Mount Tazerzait shares many similarities with the meteorite Baszkówka; some of these are the low shock stageA petrographic assessment, using features observed in minerals grains, of the degree to which a meteorite has undergone shock metamorphism. The highest stage observed in 25% of the indicator grains is used to determine the stage. Also called "shock level".               of S1, unusually high porosity, crystal growth inside vugs, very long cosmic-ray exposure ageTime interval that a meteoroid was an independent body in space. In other words, the time between when a meteoroid was broken off its parent body and its arrival on Earth as a meteorite - also known simply as the "exposure age." It can be estimated from the observed effects (~61 and ~76 m.y., respectively), noble gasElement occurring in the right-most column of the periodic table; also called "inert" gases. In these gases, the outer electron shell is completely filled, making them very unreactive. abundance, chemical composition, and date of fall. These similarities suggest that both meteorites might be members of a meteor streamRelatively narrow band of meteoroids stretched out along the orbital path of a comet. It consists of dust released from the nucleus of a comet during its perihelion passage. The dust grains escape the weak gravity of the nucleus and travel on their own independent, heliocentric orbits. Although these orbits ejected from the same source region on their parent bodyThe body from which a meteorite or meteoroid was derived prior to its ejection. Some parent bodies were destroyed early in the formation of our Solar System, while others like the asteroid 4-Vesta and Mars are still observable today.. Additionally, the L5 meteorite named Tjerebon, from Java, Indonesia, may be another member of this meteorHow long Sonic booms Of the several 10s of tons of cosmic material entering Earth's atmosphere each day, only about one ton reaches the surface. An object's chance of survival depends on its initial mass, speed and angle of entry, and friability (tendency to break up). Micrometeoroids radiate heat so stream.