ProtostarStar in the process of formation, which has not yet become hot enough in the core to initiate hydrogen burning (~107 K) to halt its gravitational collapse. Its luminosity results from the release of gravitational potential energy from the infall of nebula material from its accretion disk. in the late stages of formation, often exhibiting both periodic and random fluctuations in brightness. T Tauri stars are newly-formed (<10 Ma) low to intermediate mass stars (< 3 Msun) with central temperatures too low for nuclear fusionProcess in which two lighter atomic nuclei combine to form a heavier atomic nucleus. Very high temperatures are normally required in order for atomic nuclei to collide with sufficient energy to overcome the Coulomb barrier (their mutual electrostatic repulsions). Fusion that occurs under high-temperature conditions is called thermonuclear fusion. Fusion to have started. For the first ~100 Ma, all emitted radiation comes from gravitational energy released as the starSelf-luminous object held together by its own self-gravity. Often refers to those objects which generate energy from nuclear reactions occurring at their cores, but may also be applied to stellar remnants such as neutron stars. contracts under its own self-gravity. T Tauri stars represent an intermediate stage between true protostars (e.g. YY Orionis stars) and low-mass main sequence (hydrogen burningProcesses by which hydrogen (1H) is fused into helium (4He) with in a star. The five possible fusion paths can be divided into two sets of processes: the Proton-Proton (PP) process, which depends only on the amount of H and He in the star, and the CNO cycle (carbon-nitrogen-oxygen), which) stars like the SunOur parent star. The structure of Sun's interior is the result of the hydrostatic equilibrium between gravity and the pressure of the gas. The interior consists of three shells: the core, radiative region, and convective region. Image source: http://eclipse99.nasa.gov/pages/SunActiv.html. The core is the hot, dense central region in which the.
The nearest T Tauri stars are in the Taurus and r Ophiuchus molecular clouds, both ~400 light years away. Indications of stellar winds and jets show that at least some T Tauri stars are interacting with their environments. Both the winds and jets of are probably powered by material falling onto the central star from the accretion diskDisk-shaped cloud of gas and solids in orbital motion around a central protostar or some other massive central body. (or protoplanetary diskFlattened and rotating disk of dense gas and dust/solids orbiting a young star from which planets can eventually form.  ) observed around many of them. The random variability of T Tauri stars (with time-scales from minutes to years) are probably caused by instabilities in the accretionAccumulation of smaller objects into progressively larger bodies in the solar nebula leading to the eventual formation of asteroids, planetesimals and planets. The earliest accretion of the smallest particles was due to Van der Waals and electromagnetic forces. Further accretion continued by relatively low-velocity collisions of smaller bodies in the disk (which also produce the “bullets” of material seen in the jet of HH-30), flares on the stellar surface, or simple obscuration by nearby dust and gas clouds. Periodic (regular) variations (days) are almost certainly associated with huge sunspots on the stellar surface which pass into and out of view as the star rotates. 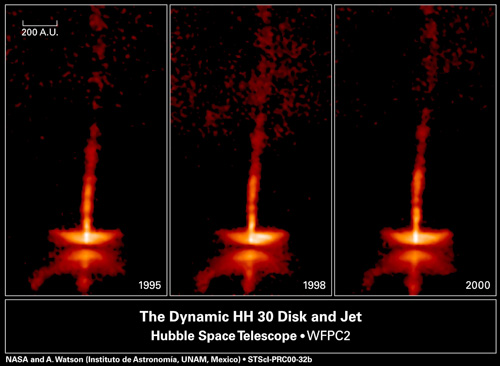