Black holes that contain between a million and a billion times more mass than a typical stellar black holeOne of the possible evolutionary endpoints of high mass stars. Stellar black holes have masses <100 Msun. Once the core of the star has completely burned to Fe, energy production stops and the core collapses resulting in a supernova explosion. If the core is greater than ~2.3 Msun, the maximum. There are only a handful of confirmed supermassive black holes (most are too far away to be observed), but they probably exist at the centers of most large galaxies, including the center of our Milky Way. For many years there was only indirect evidence of supermassive black holes: the existence of quasars. Observations of the energy output and variability timescales revealed that quasars radiate >1012  times more energy as our SunOur parent star. The structure of Sun's interior is the result of the hydrostatic equilibrium between gravity and the pressure of the gas. The interior consists of three shells: the core, radiative region, and convective region. Image source: http://eclipse99.nasa.gov/pages/SunActiv.html. The core is the hot, dense central region in which the from a region about the size of the Solar SystemThe Sun and set of objects orbiting around it including planets and their moons and rings, asteroids, comets, and meteoroids.. The only mechanism capable of producing such enormous amounts of energy is the conversion of gravitational energy into light by a massive black holeMaximally gravitationally collapsed object predicted to exist by the theory of general relativity, from which no material object, light or signal of any kind can escape. Many black holes form when a high mass supergiant star explodes in a supernova explosion at the end of its life. A star probably. More recently, direct evidence for supermassive black holes has come from observations of material orbiting galactic centers. High orbital velocities of stars and gas are best explained if they are being accelerated by a massive object with a strong gravitational field contained within a small region of space – a supermassive black hole (below). 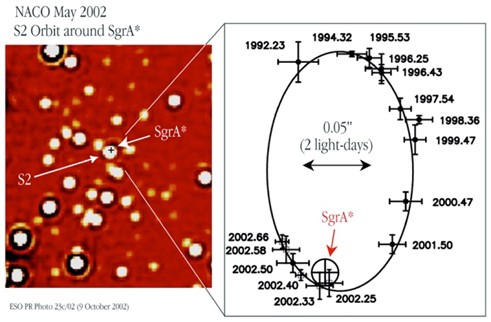 There is still debate about how supermassive black holes form. Supermassive black holes could form from the collapse of massive clouds of gas during the early stages of the formation of the galaxyConcentration of 106 to 1012 stars, dust and gas, that are gravitationally bound. Our galaxy contains ~2 × 1011 stars. There are four main types of galaxies: • Elliptical
• Lenticular
• Spiral
• Irregular
. Alternatively, a stellar black hole might consume sufficient of material over millions of years to grow into a supermassive black hole proportions. Yet another idea is that a cluster of stellar black holes might merge to form a supermassive black hole. Regardless of the mechanism, most astronomers agree that accretionAccumulation of smaller objects into progressively larger bodies in the solar nebula leading to the eventual formation of asteroids, planetesimals and planets. The earliest accretion of the smallest particles was due to Van der Waals and electromagnetic forces. Further accretion continued by relatively low-velocity collisions of smaller bodies in the of material onto a supermassive black hole drives both active galactic nuclei and galactic jets (below). 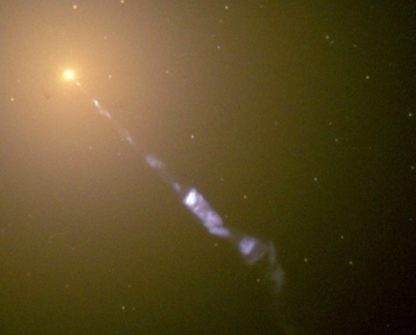