Linear streams of matter arising from a number of different sources (T Tauri stars, planetary nebulaeAn immense interstellar, diffuse cloud of gas and dust from which a central star and surrounding planets and planetesimals condense and accrete. The properties of nebulae vary enormously and depend on their composition as well as the environment in which they are situated. Emission nebula are powered by young, massive, and compact objects). Stellar jets from T Tauri stars are common in starSelf-luminous object held together by its own self-gravity. Often refers to those objects which generate energy from nuclear reactions occurring at their cores, but may also be applied to stellar remnants such as neutron stars. forming regions. These are called Herbig-Haro objects (q.v.). As material falls onto a protostarStar in the process of formation, which has not yet become hot enough in the core to initiate hydrogen burning (~107 K) to halt its gravitational collapse. Its luminosity results from the release of gravitational potential energy from the infall of nebula material from its accretion disk. from the surrounding accretion diskDisk-shaped cloud of gas and solids in orbital motion around a central protostar or some other massive central body., interactions between the magnetic fields of the rotating star and the accretionAccumulation of smaller objects into progressively larger bodies in the solar nebula leading to the eventual formation of asteroids, planetesimals and planets. The earliest accretion of the smallest particles was due to Van der Waals and electromagnetic forces. Further accretion continued by relatively low-velocity collisions of smaller bodies in the disk eject it from the stellar magnetic poles. However, this accretion process is not smooth, and there may be sudden increases or decreases in the rate of accretion onto the protostar. A sudden variations in the accretion rate produce "bullets" of denser material in the jets (HH34).

Stellar jets interact with the surrounding interstellar mediumMaterial between the stars, consisting of gas, dust and cosmic rays (high energy charged particles moving at nearly the speed of light). It comprises ~10% of visible matter in the disk of our Galaxy (Milky Way). Until recently it was generally assumed that silicates in the ISM were amorphous, but. T Tauri stars occur in star forming nebulae and their jets interact with gas remaining from the formation of the star itself, effectively sweeping out the interstellar material in their path. The swept out material accumulates at the head of the jet causing increased resistance. This eventually forms a shock front, with the jet having to force its way through the accumulated gas and dust, ionizing it.
It is not only young stars that exhibit stellar jets. Jets are also observed in planetary nebulae, which form during the final stages of evolution of stars similar to (or a little more massive than) the SunOur parent star. The structure of Sun's interior is the result of the hydrostatic equilibrium between gravity and the pressure of the gas. The interior consists of three shells: the core, radiative region, and convective region. Image source: http://eclipse99.nasa.gov/pages/SunActiv.html. The core is the hot, dense central region in which the. The jets of planetary nebulae have speeds similar to those of T Tauri jets, but are generally less well collimated (broader for their length). They form when material flowing out of the star is diverted into a jet. The collimation is usually caused by a confining equatorial disk that blocks equatorial outflow and directs the material into polar jets. These disks are often found in binary systems. For example, the star at the heart of the planetary nebulaAn immense interstellar, diffuse cloud of gas and dust from which a central star and surrounding planets and planetesimals condense and accrete. The properties of nebulae vary enormously and depend on their composition as well as the environment in which they are situated. Emission nebula are powered by young, massive M2-9 (below) is a spectroscopic binary (a pair of stars orbiting so close to each other that we are unable to separate them in images). The closeness of the two stars causes a ring of gas to be thrown off. This encircles the pair of stars, blocking the equatorial ejection of gas from the dying star and diverting it into polar outflows. 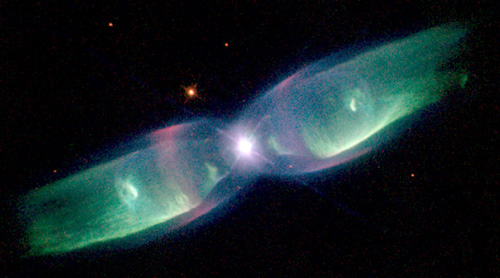 The last sources of stellar jets are compact objects (stellar black holes and neutronCharge-neutral hadron with a mass of 1.6748 x 10-27 kg, equivalent to 939.573 MeV, and an intrinsic angular momentum, or spin, of ½ (in units of h/2π). The neutron is a nucleon, one of the two basic constituents of all atomic nuclei (apart from 1H, which consists of a single stars) in binary systems. The compact object is surrounded by an accretion disk formed through Roche-lobe overflow from a companion giant star. As is the case with T Tauri jets, the jets form as material falls onto the compact object and is ejected from its magnetic poles.