Origin of the 21-cm emission lineMore or less narrow range of wavelengths in a spectrum that is brighter than neighboring wavelengths, corresponding to emission of light at a certain frequency. A heated gas in a glass container produces emission lines in its spectrum. that originates with a neutral 1H atom. The proton and the electron each have a quantum “spin,” which points either “up” or “down.” Spins can be parallel (both of them “up” or “down”), or antiparallel (opposite states). The antiparallel state has slightly less energy than the parallel state, so if an atom in the parallel state changes to antiparallel, a 21-cm radio photonDiscrete bundle of light energy. Light of a given energy (frequency) cannot be broken up indefinitely. Rather for a given frequency it comes in discrete bundles with energy (h = Planck's constant and ν= frequency): It is often useful to think of light as a bunch of particle photons; whereas, is emitted. This transition occurs every ~10 million years. Although the probability of detecting cold hydrogenLightest and most common element in the universe (~92% by atoms; ~75% by mass). Hydrogen's isotopes are: • 1H (99.9885 %)
• 2H (0.0115 %), also called deuterium.
• 3H, also called Tritium, is a radioactive (t½ = 12.32 y) by-product of atmospheric thermonuclear tests in Earth's hydrosphere and atmosphere.
gas through this mechanism is very small, the relative rarity of the transition is more than compensated for by the superabundance of neutral 1H in the interstellar mediumMaterial between the stars, consisting of gas, dust and cosmic rays (high energy charged particles moving at nearly the speed of light). It comprises ~10% of visible matter in the disk of our Galaxy (Milky Way). Until recently it was generally assumed that silicates in the ISM were amorphous, but; at any one time some fraction will be in the slightly excited stateAny energy state of an atom, or of a solid, above its ground state. For atoms and solids, excited states refers to energy levels of electrons higher than the ground-state energy. Excited states are not indefinitely stable, so the atom will eventually return to its ground state..

The spin-flip transition can only be used to trace the distribution of neutral hydrogenElectrically neutral hydrogen atom with one proton and one electron. It is commonly referred to as HI (pronounced H-one), and is located throughout galaxies as HI clouds or external to galaxies as part of the intercloud gas. Neutral H is detected via the spin-flip transition at 21 cm, and HI in the UniverseThat which contains and subsumes all the laws of nature, and everything subject to those laws; the sum of all that exists physically, including matter, energy, physical laws, space, and time. Also, a cosmological model of the universe.. For regions rich in molecular hydrogen (e.g. molecular clouds), astronomers must use a different tracer. This is generally the carbon monoxideMolecule (CO) used to map the distribution of matter, especially molecular hydrogen, H2, in interstellar space. Molecular hydrogen is by far the dominant molecule in molecular clouds, but is very difficult to detect. One reason is that the strength of spectral lines from molecules is related to how asymmetric the moleculeCollection of atoms held together by chemical bonds into a discrete, finite structure. One way molecules are represented is by a chemical formula where symbols for the elements are used to indicate the types of atoms present and subscripts are used to indicate the relative numbers of atoms. For example, (CO) which has a characteristic emission at the shorter wavelengthDistance from one peak of a wave to the next. Wavelength is measured in units of distance. The wavelengths of visible light correspond to ~400-650 nm. Wavelength is an important way to characterize a wave. For light, the shorter the wavelength, the higher the energy of the light wave. of 2.6 mm. 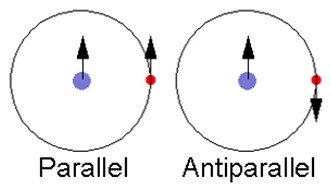