MoleculeCollection of atoms held together by chemical bonds into a discrete, finite structure. One way molecules are represented is by a chemical formula where symbols for the elements are used to indicate the types of atoms present and subscripts are used to indicate the relative numbers of atoms. For example, (CO) used to map the distribution of matter, especially molecular hydrogenLightest and most common element in the universe (~92% by atoms; ~75% by mass). Hydrogen's isotopes are: • 1H (99.9885 %)
• 2H (0.0115 %), also called deuterium.
• 3H, also called Tritium, is a radioactive (t½ = 12.32 y) by-product of atmospheric thermonuclear tests in Earth's hydrosphere and atmosphere.
, H2, in interstellar space. Molecular hydrogen is by far the dominant molecule in molecular clouds, but is very difficult to detect. One reason is that the strength of spectral lines from molecules is related to how asymmetric the molecule is. Since the hydrogen molecule is perfectly symmetric (containing two H atoms), its spectral lines are extremely weak. In addition, the energy required to change the rotational state of a molecule is dependent on its mass. Since the hydrogen molecule is the lightest of all molecules, a significant amount of energy (~500 Kelvin) must be absorbed to change its rotational state. In a cloud with an average temperature of ~10 Kelvin, this is an unlikely event and most of the hydrogen molecules remain in their ground stateEnergy state of an atom, or of a solid, when its total energy equals the minimum possible energy for that atom or solid. For solids, this only occurs at a temperature of absolute zero. Individual atoms may be in their ground state at non-zero temperatures, but they will not stay there. In contrast, CO is asymmetrical and relatively heavy (28 vs. 2 amuAll the atomic masses of the elements are determined relative to 12C. The atomic mass unit (AMU) is a precise number defined as exactly 1/12th the mass of a 12C (carbon) atom (1.9944235 × 10-23 g / 12 = 1.66057 x 10-24 g). Atomic mass units allow for determination of). It has been shown that for every CO molecule there are about 10,000 H2 molecules meaning that we can trace molecular hydrogen through the emission from the CO molecule. This is the primary method use to locate molecular clouds. 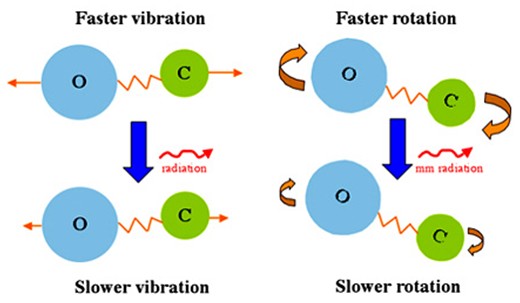 In the Milky Way, the CO luminosityBasic property used to characterize stars, luminosity is defined as the total energy radiated by a star each second. An object’s luminosity is often compared to that of the Sun (Lsun = 4 × 1033 ergs/s = 3.9 × 1026 Watts). Luminosity has the same units as power (energy per is closely correlated with the virial masses of the clouds (below), justifying the use of CO as a tracer of the mass of H2. The best fit to these data for clouds with masses between 105 and 2 x 106 Msun yields a constant of proportionality of 3.0 x 1020 H2 cm-2 (K km s-1)-1. The similarity of the clouds in other galaxies (M31, M33, and IC 10) to the Milky Way justifies the use of the same CO-H2 proportionality in external galaxies.