Pyroxene-plagioclase pallasiteOne of two main classes of stony-iron meteorite, the other being mesosiderites. Pallasites are igneous in nature and characterized by crystals of olivine, sometimes peridot (green gem quality clear olivine crystals), embedded in a matrix of Fe-Ni metal. The type specimen, weighing 680 kg, was found in the mountains near, ungroupedModifying term used to describe meteorites that are mineralogically and/or chemically unique and defy classification into the group or sub-group they most closely resemble. Some examples include Ungrouped Achondrite (achondrite-ung), Ungrouped Chondrite (chondrite-ung), Ungrouped Iron (iron-ung), and Ungrouped Carbonaceous (C-ung). 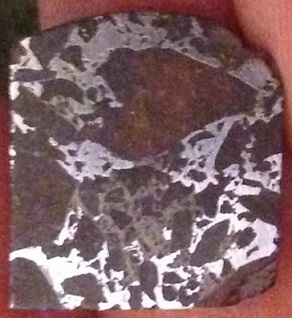 Purchased January 2015
no coordinates recorded Within the Northwest Africa (NWA) dense accumulation area a single 580 g fusion-crusted meteoriteWork in progress. A solid natural object reaching a planet’s surface from interplanetary space. Solid portion of a meteoroid that survives its fall to Earth, or some other body. Meteorites are classified as stony meteorites, iron meteorites, and stony-iron meteorites. These groups are further divided according to their mineralogy and was found along with 26 g of related fragments. The meteorite was subsequently sold to meteorite dealer Steve Arnold who submitted a type sample to the University of New Mexico (C. Agee and N. Muttik) for analysis and classification. Northwest Africa 10019 is an ungrouped pyroxene–plagioclase-bearing pallasite that exhibits significant compositional heterogeneity. It is composed of olivineGroup of silicate minerals, (Mg,Fe)2SiO4, with the compositional endpoints of forsterite (Mg2SiO4) and fayalite (Fe2SiO4). Olivine is commonly found in all chondrites within both the matrix and chondrules, achondrites including most primitive achondrites and some evolved achondrites, in pallasites as large yellow-green crystals (brown when terrestrialized), in the silicate portion (up to 6 mm), orthopyroxeneOrthorhombic, low-Ca pyroxene common in chondrites. Its compositional range runs from all Mg-rich enstatite, MgSiO3 to Fe-rich ferrosilite, FeSiO3. These end-members form an almost complete solid solution where Mg2+ substitutes for Fe2+ up to about 90 mol. % and Ca substitutes no more than ~5 mol. % (higher Ca2+ contents occur (up to 5 mm), kamaciteMore common than taenite, both taenite and kamacite are Ni-Fe alloys found in iron meteorites. Kamacite, α-(Fe,Ni), contains 4-7.5 wt% Ni, and forms large body-centered cubic crystals that appear like broad bands or beam-like structures on the etched surface of a meteorite; its name is derived from the Greek word, and taeniteLess common than kamacite, both taenite and kamacite are Ni-Fe alloys found in iron meteorites. Taenite, γ-(Fe,Ni), has 27-65 wt% Ni, and forms small crystals that appear as highly reflecting thin ribbons on the etched surface of a meteorite; the name derives from the Greek word for "ribbon.", along with minor Ca-plagioclase, troiliteBrass colored non-magnetic mineral of iron sulfide, FeS, found in a variety of meteorites., chromiteBrownish-black oxide of chromium and iron (Cr-Fe oxide), Cr2FeO4, found in many meteorite groups., schreibersiteNi-Fe phosphide mineral, (Fe,Ni)3P, yellowish in color and predominantly found in iron and stony-iron meteorites. Schreibersite can also be found in a variety of other meteorites including some acapulcoites, aubrites, enstatite chondrites and achondrites, lunars, ureilites, winonaites and a smattering of other meteorite types like CM, CO and CB. Schreibersite, and Ca–Mg-phosphates (farringtonite, stanfieldite, and merrillite).

Northwest Africa 10019 is unique among all pallasites in that it contains a low abundance (<1 vol%) of Ca-plagioclase (An50–84); the pyroxeneA class of silicate (SiO3) minerals that form a solid solution between iron and magnesium and can contain up to 50% calcium. Pyroxenes are important rock forming minerals and critical to understanding igneous processes. For more detailed information, please read the Pyroxene Group article found in the Meteoritics & Classification category. pallasite Choteau is the only other pallasite found to contain plagioclaseAlso referred to as the plagioclase feldspar series. Plagioclase is a common rock-forming series of feldspar minerals containing a continuous solid solution of calcium and sodium: (Na1-x,Cax)(Alx+1,Si1-x)Si2O8 where x = 0 to 1. The Ca-rich end-member is called anorthite (pure anorthite has formula: CaAl2Si2O8) and the Na-rich end-member is albite, but in that pallasite it is highly albitic (Ab85.6). Boesenberg et al. (2016) observed that plagioclase in NWA 10019 is present as fine (10–50 µm) to coarse (2 mm) grains within olivine and orthopyroxene. The angular olivines in NWA 10019 have a Fa content (~Fa16.5) that is appreciably higher than typical main-group pallasites, but similar to the subset of main-group pallasites with anomalous silicates (Springwater, Rawlinna 001, Phillips County, and Zaisho). Boesenberg et al. (2016) identified a unique enclave in NWA 10019 that has more primitive phases than the rest of the pallasite, including Mg-rich chromite, slightly more magnesian olivine, and plagioclase that has a broader compositional range. In addition, they reported that the pallasite has an Fe/Mn value of 28–37. To date, seven pyroxene-bearing meteorites having a pallasite-like composition have been characterized: the ‘Vermillion pallasite grouplet’ (Choteau, Vermillion, and Y-8451), Zinder, NWA 1911, NWA 10019, and LoV 263. Vermillion is composed of 86 vol% FeNi-metal and 14 vol% silicates, with the silicates consisting of 93% olivine and 5% pyroxene (4.9% opx and 0.1% cpx)—equivalent to a modal composition of ~0.7 vol% pyroxene. Wasson and Kallemeyn (2002) recognized that Vermillion might be related to the IAB complex iron meteorites. The 54.8 g Y-8451 pallasite contains 57 vol% silicates consisting of 97% olivine, 2% orthopyroxene, 0.4% clinopyroxene, and 0.4% augiteHigh-Ca clinopyroxene, (Ca,Mg,Fe)SiO3, that occurs in many igneous rocks, particularly those of basaltic composition. In order to be considered augite, the clinopyroxene must contain 20 to 45 mol % of calcium (Wo20 - 45). An important and unique Martian meteorite is NWA 8159, that has been classified as an augite basalt.. The silicates in Y-8451 are modally equivalent to ~1.6 vol% pyroxene (Boesenberg et al., 2000). The 46 g Zinder pallasite has a high modal abundance of pyroxene, similar to that in NWA 1911, estimated to be 28 vol% (Wittke and Bunch, 2003). The modal abundance of silicates in NWA 10019 is ~60%, comprised of olivine (~43–51 vol%) and orthopyroxene (~9–17 vol%) with pyroxene accounting for ~1–5 vol% of this pallasite (Boesenberg et al., 2016). The silicates in the 4.88 kg LoV 263 pallasite are comprised of approximately equal proportions of olivine and orthopyroxene. In a study conducted by Gregory et al. (2016), it was ascertained that Choteau is compositionally and isotopically similar to both Vermillion and Y-8451, and it was concluded that these three pyroxene pallasites form a grouplet; they suggested that these meteorites should be termed ‘Vermillion pallasites’ (see the Vermillion page for additional details). The low-Ca pyroxene in Zinder, NWA 1911, NWA 10019, and LoV 263 is composed entirely of orthopyroxene (orthopyroxene in NWA 10019 contains ~100µm-sized clinopyroxene inclusions; Boesenberg et al., 2016), while that in the Vermillion pallasites comprises both orthopyroxene and clinopyroxene (Niekerk, 2005; Irving and Kuehner, 2013). Zinder contains a higher abundance of chromite compared to the Vermillion pallasites. The O-isotopic compositions of the Vermillion pallasites are distinct from the other four pyroxene-bearing pallasites, and many are associated with a number of established O-isotopic trends: the Vermillion pallasites plot near the field of acapulcoitesPrimitive achondrite that belongs to a small group named after the Acapulco meteorite that was observed to fall in Mexico in 1976. Acapulcoites are made mostly of fine-grained olivine (Fo3-14), orthopyroxene(En86-97), Ca-rich pyroxene (En51Wo44), plagioclase (An12-31), Ni-Fe metal, and troilite. They are transitional between primordial chondritic matter and more differentiated and lodranites, and both NWA 1911 and NWA 10019 plot on the eucriteMost common type of achondrite meteorite and a member of the HED group. Eucrites are basalts composed primarily of pigeonite and anorthite (An60-98). Eucrites have been placed into three subgroups based on mineralogical and chemical differences. • Non-cumulate eucrites represent the upper crust that solidified on a magma ocean after/mesosiderite fractionationConcentration or separation of one mineral, element, or isotope from an initially homogeneous system. Fractionation can occur as a mass-dependent or mass-independent process. line, which remains incompletely resolved from the bimodal fractionation trend of the main-group pallasites (Ziegler and Young, 2011; K. Ziegler, 2015). Although Zinder has been demonstrated to be associated with NWA 1911 (Boesenberg and Humayun, 2019), it plots on the terrestrial fractionation line due to a difference in δ17O values; however, terrestrial weathering may be the reason for this difference. A separate O-isotopic analysis for NWA 10019 was conducted by Boesenberg et al. (2016), and it provided values which plot on an extension of the main-group near the pyroxene pallasite NWA 1911. However, many mineralogical features distinguish NWA 10019 from the main-group pallasites, including the presence of plagioclase, a significantly lower abundance of volatile elementsChemical elements that condense (or volatilize) at relatively low temperatures. The opposite of volatile is refractory. Volatile elements can be divided into moderately volatile (Tc = 1230–640 K) and highly volatile (Tc < 640 K). The moderately volatile lithophile elements are: Mn, P, Na, B ,Rb, K, F, Zn. The moderately (e.g., Ga, Ge, As and AuThe astronomical unit for length is described as the "mean" distance (average of aphelion and perihelion distances) between the Earth and the Sun. Though most references state the value for 1 AU to be approximately 150 million kilometers, the currently accepted precise value for the AU is 149,597,870.66 km. The), high Al content in chromite, and metalElement that readily forms cations and has metallic bonds; sometimes said to be similar to a cation in a cloud of electrons. The metals are one of the three groups of elements as distinguished by their ionization and bonding properties, along with the metalloids and nonmetals. A diagonal line drawn that is more evolved than in any other pallasite.

OxygenElement that makes up 20.95 vol. % of the Earth's atmosphere at ground level, 89 wt. % of seawater and 46.6 wt. % (94 vol. %) of Earth's crust. It appears to be the third most abundant element in the universe (after H and He), but has an abundance only isotopeOne of two or more atoms with the same atomic number (Z), but different mass (A). For example, hydrogen has three isotopes: 1H, 2H (deuterium), and 3H (tritium). Different isotopes of a given element have different numbers of neutrons in the nucleus. composition of NWA 10019 compared to main-group pallasites and mesosiderites (left) and HEDs (right).
TFL = terrestrial fractionation line; EFL = eucriteMost common type of achondrite meteorite and a member of the HED group. Eucrites are basalts composed primarily of pigeonite and anorthite (An60-98). Eucrites have been placed into three subgroups based on mineralogical and chemical differences. • Non-cumulate eucrites represent the upper crust that solidified on a magma ocean after fractionation line
Diagrams adapted from the Meteoritical Bulletin Oxygen Isotope Plots—The Meteoritical Society

Diagram credit: Boesenberg et al., 49th LPSC, #1556 (2018) Based on all of the data gathered so far, it could be concluded that the pallasites in our collections represent at least seven separate parent bodies: 1) main-group; 2) Eagle Station group; 3) Milton; 4) Choteau + Vermillion + Y-8451; 5) Zinder + NWA 1911; 6) NWA 10019; 7) LoV 263. In addition, several pallasites with anomalous silicates (e.g., Springwater) and anomalous metal (e.g., Glorieta Mountain) could possibly increase the number of unique parent bodies. The specimen of NWA 10019 shown above is a 2.018 g partial slice. The photo shown below is a large slice from this unique pyroxene pallasite. 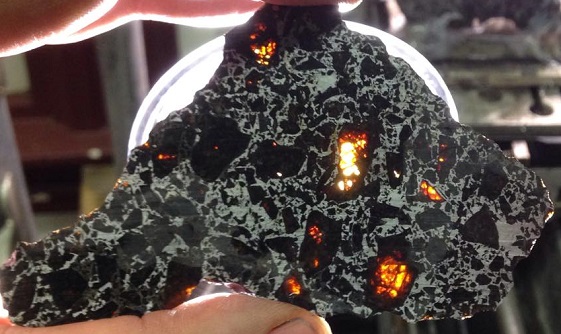