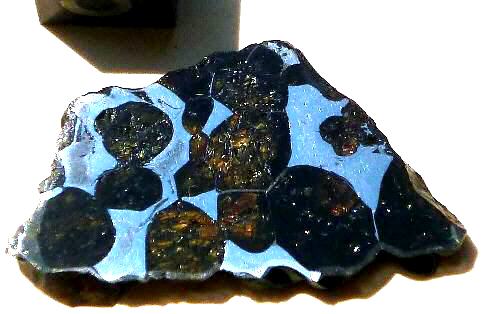 Found 2006
40° 16′ N., 94° 41′ W. Employing a technique often utilized by famed meteoriteWork in progress. A solid natural object reaching a planet’s surface from interplanetary space. Solid portion of a meteoroid that survives its fall to Earth, or some other body. Meteorites are classified as stony meteorites, iron meteorites, and stony-iron meteorites. These groups are further divided according to their mineralogy and hunter Harvey Nininger, Karl Aston distributed flyers around his Missouri farming community. In 2006, a 17 kg mass (held by Dr. Randy Korotev) was discovered embedded 90% in the ground near Conception Junction, MO. The mass was brought to the attention of Aston who identified it as a pallasite meteorite. The meteorite was subsequently acquired from the landowner with the assistance of Dave Gheesling. Although a thorough search was conducted with the help of meteorite hunter Robert Ward, no further masses were found.

Initially, a section of the pallasite was examined by Randy Korotev (Washington University), while an in-depth analysis was conducted by John Wasson (UCLA). The Conception Junction pallasite was determined to be a unique main-group member having anomalous metal chemistry. On element–AuThe astronomical unit for length is described as the "mean" distance (average of aphelion and perihelion distances) between the Earth and the Sun. Though most references state the value for 1 AU to be approximately 150 million kilometers, the currently accepted precise value for the AU is 149,597,870.66 km. The diagrams, Conception Junction plots well below most main-group members for Ni and Cu, and above most main-group members for Co, Ga, As, and Ir. Click here to see a diagram comparing olivineGroup of silicate minerals, (Mg,Fe)2SiO4, with the compositional endpoints of forsterite (Mg2SiO4) and fayalite (Fe2SiO4). Olivine is commonly found in all chondrites within both the matrix and chondrules, achondrites including most primitive achondrites and some evolved achondrites, in pallasites as large yellow-green crystals (brown when terrestrialized), in the silicate portion chemistry among main-group members and the unique Milton pallasite. The mostly rounded olivine crystals have diameters that average 4.5 mm, which is among the smallest of all pallasites; this small size reduces translucency in thin slices. A historical monograph titled ‘CONCEPTION JUNCTION PALLASITE, MO.’ has been written by Gheesling and Wasson. The specimen shown above is a 3.95 g slice cut by Marlin Cilz at the Montana Meteorite Laboratory on a wire saw. The photo below was taken after the first sectioning through the weathered exterior of the mass. 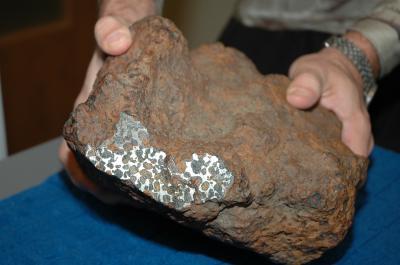