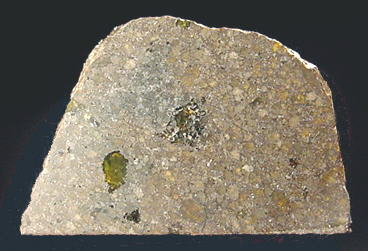 Purchased August 2004
no coordinates recorded Two conjoint fragments of a single, partially fusion-crusted stone weighing 241 g was purchased in Erfoud, Morocco by dealer G. Hupé. A portion was sent to Northern Arizona University for analysis and the classification was given as an olivine–pigeonite ureilite (T. Bunch and J. Wittke). Northwest Africa 2624 is an unusual ureilite exhibiting the typical equigranular olivineGroup of silicate minerals, (Mg,Fe)2SiO4, with the compositional endpoints of forsterite (Mg2SiO4) and fayalite (Fe2SiO4). Olivine is commonly found in all chondrites within both the matrix and chondrules, achondrites including most primitive achondrites and some evolved achondrites, in pallasites as large yellow-green crystals (brown when terrestrialized), in the silicate portion texture, but with abundant areas of silicaSilicon dioxide, SiO2. glass and large translucent pyroxeneA class of silicate (SiO3) minerals that form a solid solution between iron and magnesium and can contain up to 50% calcium. Pyroxenes are important rock forming minerals and critical to understanding igneous processes. For more detailed information, please read the Pyroxene Group article found in the Meteoritics & Classification category. megacrysts. The olivines contain fractures in which moderate reductionOxidation and reduction together are called redox (reduction and oxidation) and generally characterized by the transfer of electrons between chemical species, like molecules, atoms or ions, where one species undergoes oxidation, a loss of electrons,  while another species undergoes reduction, a gain of electrons. This transfer of electrons between reactants has occurred (R3). Carbonaceous and metallic components are also present in this ureilite. Northwest Africa 2624 has undergone only slight terrestrial weathering (W0/1) and has been very weakly shocked (S2).

A synopsis of current models for ureilite formation is presented on the Kenna page. The specimen of NWA 2624 shown above is a 4.6 g partial slice with several translucent pyroxene megacrysts (with excellent photography courtesy of Greg Hupé).