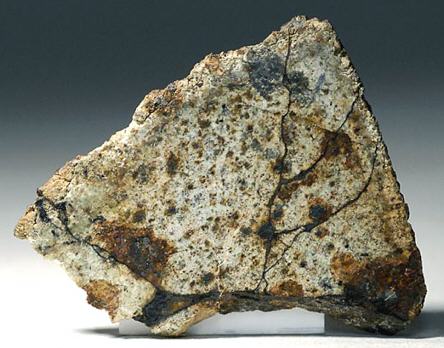 Found 2010
no coordinates recorded A stone weighing 134 g was found in the Sahara and sold to Chladni’s Heirs. A sample was submitted for analysis and classification to the University of Washington in Seattle (A. Irving), and NWA 6348 was determined to be a metachondriteTerm used to describe a metamorphosed chondrite. Also referred to as a type 7 chondrite. Metachondrites are texturally evolved rocks derived from chondritic precursors and some have been classified as primitive achondrites. (Irving et al., 2005) with affinities to the L chondriteOrdinary chondrites low in free Ni-Fe metal (4 to 10 vol. %), containing olivine (Fa22-26) and the orthopyroxene hypersthene (Fs19-22). Average chondrule diameters (0.7 mm) are larger than those in H chondrites. The asteroid 433 Eros is suspected as a parent body, based on reflectance spectra, but most L chondrites group. The meteoriteWork in progress. A solid natural object reaching a planet’s surface from interplanetary space. Solid portion of a meteoroid that survives its fall to Earth, or some other body. Meteorites are classified as stony meteorites, iron meteorites, and stony-iron meteorites. These groups are further divided according to their mineralogy and has a shock stageA petrographic assessment, using features observed in minerals grains, of the degree to which a meteorite has undergone shock metamorphism. The highest stage observed in 25% of the indicator grains is used to determine the stage. Also called "shock level".               of S3 and a weathering grade of W2.