Martian ShergottiteIgneous stony meteorite with a Martian origin consisting mainly of plagioclase (or a shocked glass of plagioclase composition) and pyroxene. They are the most abundant type of SNC meteorites and the type member is the Shergotty meteorite, which fell in India in 1865. Shergottites are igneous rocks of volcanic or
Poikilitic (formerly ‘lherzolitic’ shergottite)
(enriched, permafic, pyroxene-oikocrystic) 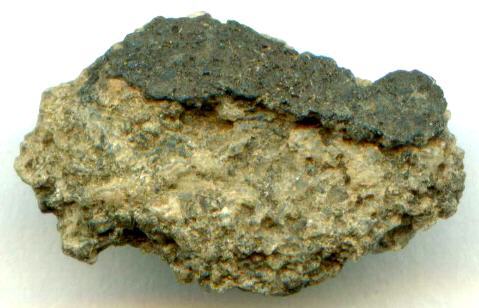 Found 2012
no coordinates recorded A single partially fusion-crusted stone weighting 2,130 g was found near Smara, Morocco and later purchased by meteoriteWork in progress. A solid natural object reaching a planet’s surface from interplanetary space. Solid portion of a meteoroid that survives its fall to Earth, or some other body. Meteorites are classified as stony meteorites, iron meteorites, and stony-iron meteorites. These groups are further divided according to their mineralogy and dealers. A sample was submitted for analysis and classification to the University of Washington in Seattle (A. Irving and S. Kuehner) and the University of Alberta (G. Chen) and it was determined to be a martian poikilitic, enriched, permafic, shergottite. Additional fragments from this same martian meteoriteOver 30 of the meteorites found on Earth almost certainly came from Mars (see http://www.imca.cc/mars/martian-meteorites.htm and http://www2.jpl.nasa.gov/snc/). All but one belongs to the group known as SNC meteorites, which includes the shergottites, nakhlites, and chassignites. SNC meteorites contain minerals that crystallized within the past 1.35 to 0.15 Ga, making them fallMeteorite seen to fall. Such meteorites are usually collected soon after falling and are not affected by terrestrial weathering (Weathering = 0). Beginning in 2014 (date needs confirmation), the NomComm adopted the use of the terms "probable fall" and "confirmed fall" to provide better insight into the meteorite's history. If, now estimated to have a combined weight of ~5 kg, were sold at the 2013 Tucson Gem and MineralInorganic substance that is (1) naturally occurring (but does not have a biologic or man-made origin) and formed by physical (not biological) forces with a (2) defined chemical composition of limited variation, has a (3) distinctive set of of physical properties including being a solid, and has a (4) homogeneous Show by Moroccan dealers and have been verified as pairings (e.g., NWA 7387, 7755, 7937, 8161).

Northwest Africa 7397 exhibits a unique appearance in hand sample, but has a texture and composition typical of poikilitic shergottitesIgneous stony meteorite with a Martian origin consisting mainly of plagioclase (or a shocked glass of plagioclase composition) and pyroxene. They are the most abundant type of SNC meteorites and the type member is the Shergotty meteorite, which fell in India in 1865. Shergottites are igneous rocks of volcanic or. As with other poikilitic shergottites, it consists of two textural regions: one having a poikilitic texture comprised of large pyroxeneA class of silicate (SiO3) minerals that form a solid solution between iron and magnesium and can contain up to 50% calcium. Pyroxenes are important rock forming minerals and critical to understanding igneous processes. For more detailed information, please read the Pyroxene Group article found in the Meteoritics & Classification category. oikocrysts (up to 1.5 cm) enclosing olivineGroup of silicate minerals, (Mg,Fe)2SiO4, with the compositional endpoints of forsterite (Mg2SiO4) and fayalite (Fe2SiO4). Olivine is commonly found in all chondrites within both the matrix and chondrules, achondrites including most primitive achondrites and some evolved achondrites, in pallasites as large yellow-green crystals (brown when terrestrialized), in the silicate portion (< ~500µm) and chromiteBrownish-black oxide of chromium and iron (Cr-Fe oxide), Cr2FeO4, found in many meteorite groups. (< ~150µm) chadacrysts, and the other having a nonpoikilitic texture comprised of olivine, pyroxene, and interstitialTerm applied to ions or atoms occupying sites between lattice points. maskelyniteNatural glass composed of isotropic plagioclase produced during shock metamorphism (not melting) at pressures of ~30 GPa. Maskelynite is commonly found in shergottites though also found in some ordinary chondrites, HED and lunar meteorites. It is also found in association with meteorite impact craters and crater ejecta. Named after British, along with minor merrillite, Ti-chromite, pyrrhotiteIron sulfide group of minerals whose composition ranges widely between its end members pyrrhotite (Fe7S8) whose crystal structure is monoclinic, and troilite (FeS) whose crystal structure is hexagonal. Its general formula is Fe1−xS (where x = 0 to 0.17). The troilite phase is found mainly in meteorites and in the and ilmeniteTi-Fe oxide, TiFeO3, found in achondrites, lunar mare basalts, and shergottites. Ilmenite forms as a primary mineral in mafic igneous rocks. It crystallizes relatively early out of a magma before most of the other minerals, and as a result, the heavier crystals of ilmenite precipitate to the bottom of the magma. Olivines in the nonpoikilitic region contain sparse K-Na-Al-Si-rich melt inclusions associated with high-pressure phases such as stishoviteDense, high-pressure phase of quartz; so far identified only in shock-metamorphosed, quartz-bearing rocks from meteorite impact craters. Stishovite was synthesized in 1961 before it was discovered at Meteor Crater, Arizona. Its structure consists of parallel chains of single SiO6 octahedra. The octahedra are on their sides, sharing opposing edges. Image and ringwooditeHigh-pressure olivine polymorph with a spinel structure that is found in highly shocked meteorites (above ~50 GPa, shock level > S5) and the Earth's transition zone mantle (~13 GPa). Under even higher pressure in the lower mantle (~24 GPa), ringwoodite decomposes into perovskite (Mg,Fe)SiO3, and magnesiowüstite (Mg,Fe)O, whose properties are, which attest to shock pressures of ~25 GPa and temperatures of 2300–2500°C (Yoshida et al., 2016). This meteorite has many features consistent with a strong shock stageA petrographic assessment, using features observed in minerals grains, of the degree to which a meteorite has undergone shock metamorphism. The highest stage observed in 25% of the indicator grains is used to determine the stage. Also called "shock level".               (plagioclaseAlso referred to as the plagioclase feldspar series. Plagioclase is a common rock-forming series of feldspar minerals containing a continuous solid solution of calcium and sodium: (Na1-x,Cax)(Alx+1,Si1-x)Si2O8 where x = 0 to 1. The Ca-rich end-member is called anorthite (pure anorthite has formula: CaAl2Si2O8) and the Na-rich end-member is albite conversion to maskelynite, melt veins, and melt pockets) and low terrestrial weathering and contamination (carbonate-filled fractures, La-Ce enrichments; Howarth et al., 2014).

Poikilitic shergottites as a group share a similar crystallizationPhysical or chemical process or action that results in the formation of regularly-shaped, -sized, and -patterned solid forms known as crystals. history, i.e., formation of pyroxene oikocrysts and their accumulation to form compact poikilitic regions, followed by the crystallization of intercumulus melt to form the nonpoikilitic regions. The nonpoikilitic region was subsequently formed at shallower depths under progressively higher oxidizingOxidation and reduction together are called redox (reduction and oxidation) and generally characterized by the transfer of electrons between chemical species, like molecules, atoms or ions, where one species undergoes oxidation, a loss of electrons,  while another species undergoes reduction, a gain of electrons. This transfer of electrons between reactants conditions and lower temperatures (Howarth et al., 2014; Zemeny et al., 2017). Since olivine in NWA 7397 is more ferroan than in other poikilitic shergottites, it was located at a shallower depth (Yoshida et al., 2016). The pyroxene oikocrysts of the poikilitic region in NWA 7397 are calculated to have formed at a depth corresponding to ~10 kbar. Rahib et al. (2017) conducted a crystal size distribution analyses for a selection of poikilitic shergottites. From the results (based on growth rates and magmaMolten silicate (rock) beneath the surface of a planetary body or moon. When it reaches the surface, magma is called lava. residence times) they inferred that NWA 7397 and NWA 4468 likely crystallized at shallower depths than the other enriched samples if they all derive from a common magmatic unit. Since enriched and depleted basaltic (extrusiveRefers to igneous rocks erupted on a planetary body's surface.) shergottites have similar young crystallization ages as enriched and depleted poikilitic (intrusiveRefers to igneous rocks that crystallized underground.) shergottites, it is considered they might have formed from the same respective evolving parental source reservoir; further evidence of a genetic link between these basaltic and poikilitic (and olivine-phyric) shergottites could be revealed through future calculations of their ejection ages.

While most all poikilitic shergottites studied thus far are depleted in REEs, Northwest Africa 7397 and three others are enriched in REEs (NWA 4468, NWA 10618, and RBT 04261/2). Northwest Africa 7397 shows many chemical and mineralogical similarities with these enriched poikilitic shergottites and shows differences with depleted members (He and Xiao, 2014). A two-stage formation model has been proposed by Howarth et al. (2014) for these enriched samples. The first stage is similar to that of all poikilitic shergottites—crystallization of a parental source melt and crystal accumulation at the bottom of a magma chamber to form a poikilitic lithology. However, in these few enriched shergottites, the second stage occurred later at a shallower depth. It is proposed that a succeeding flow of magma entrained former olivine and pyroxene cumulateIgneous rock composed of crystals that have grown and accumulated (often by gravitational settling) in a cooling magma chamber. crystals from the initial magma chamber and rose toward the suface, crystallizing the nonpoikilitic lithology. The differences in formation temperature and oxygen fugacityUsed to express the idealized partial pressure of a gas, in this case oxygen, in a nonideal mixture. Oxygen fugacity (ƒO2) is a measure of the partial pressure of gaseous oxygen that is available to react in a particular environment (e.g. protoplanetary disk, Earth's magma, an asteroid's regolith, etc.) and between the poikilitic and nonpoikilitic lithologies calculated for NWA 7397 and the other enriched members are consistent with this scenario (He and Xiao, 2014). Based on their textural similarities, both enriched and depleted poikilitic shergottites are believed to have formed through similar processes, but to have derived from isotopically distinct LREE-enriched and -depleted parental source reservoirs. Howarth et al. (2014) conclude that the alternative scenario of enrichment through assimilation of a crustal component by a depleted source magma is not consistent with their research.

In an effort to rectify the discrepencies that exist in martian meteorite nomenclature, the textural term ‘poikilitic’ was proposed by Walton et al. (2012) to apply to those meteorites previously referred to as ‘lherzolitic’ shergottites, which is to be used along with additional descriptive terms for bulk major elementSubstance composed of atoms, each of which has the same atomic number (Z) and chemical properties. The chemical properties of an element are determined by the arrangement of the electrons in the various shells (specified by their quantum number) that surround the nucleus. In a neutral atom, the number of compositions (based on a plot of Mg/[Mg + Fe] vs. CaO, where this ratio increases along the sequence from maficOne of the two broad categories of silicate minerals, the other being felsic, based on its magnesium (Mg) and/or iron (Fe) content. Mafic indicates silicate minerals that are predominantly comprised of Mg and/or Fe.The term is derived from those major constituents: Magnesium + Ferrum (Latin for iron) + ic (having to permafic to ultramaficTerm used for silicate minerals with cations predominantly Mg and/or Fe. Mafic minerals are dominated by plagioclase and pyroxene, and also contain smaller amounts of olivine.) and trace element content (based on the enrichment of HREE over LREE, increasing along the sequence from depleted to intermediate to enriched).

More detailed information about the petrogenetic and classification history of the poikilitic shergottites can be found on the NWA 1950 page. The specimen of NWA 7397 shown above is a 0.5 g partial slice with a small amount of fusion crustMelted exterior of a meteorite that forms when it passes through Earth’s atmosphere. Friction with the air will raise a meteorite’s surface temperature upwards of  4800 K (8180 °F) and will melt (ablate) the surface minerals and flow backwards over the surface as shown in the Lafayette meteorite photograph below.. The top photo below shows the cut face of the main massLargest fragment of a meteorite, typically at the time of recovery. Meteorites are commonly cut, sliced or sometimes broken thus reducing the size of the main mass and the resulting largest specimen is called the "largest known mass"., while the bottom photo is a close-up view of the poikilitic texture of NWA 7397, shown courtesy of Darryl Pitt. 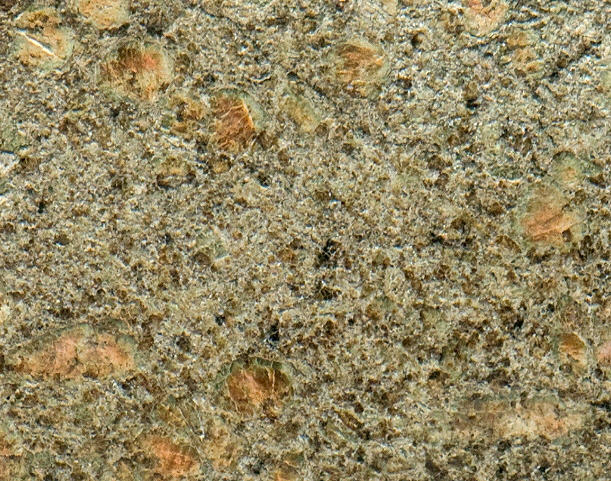