Martian ShergottiteIgneous stony meteorite with a Martian origin consisting mainly of plagioclase (or a shocked glass of plagioclase composition) and pyroxene. They are the most abundant type of SNC meteorites and the type member is the Shergotty meteorite, which fell in India in 1865. Shergottites are igneous rocks of volcanic or
Poikilitic (formerly ‘lherzolitic’ shergottite)
(intermediate, permafic, plagioclase–olivine–clinopyroxenite
or olivine–melagabbro/meladiabase) 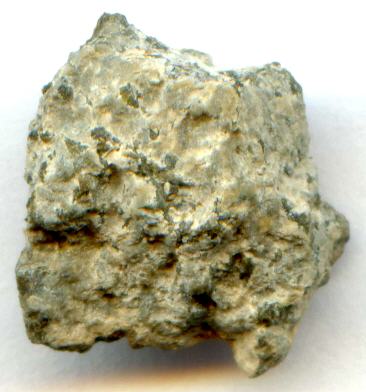 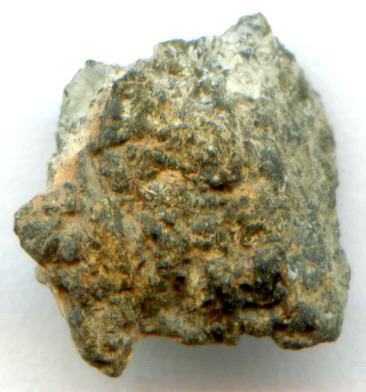 click on photos for a magnified view Purchased December 2004
no coordinates recorded A single stone reported to weigh 30.67 g was found in Algeria or Morocco and acquired by Moroccan dealer A. Habibi. A 9.3 g portion of the small meteoriteWork in progress. A solid natural object reaching a planet’s surface from interplanetary space. Solid portion of a meteoroid that survives its fall to Earth, or some other body. Meteorites are classified as stony meteorites, iron meteorites, and stony-iron meteorites. These groups are further divided according to their mineralogy and was subsequently purchased by N. Oakes. A sample of the stone was submitted for analysis and classification (T. Bunch and J. Wittke, NAU; A. Irving and S. Kuehner, UWS), and it was determined that NWA 2646 is a unique type of rock from Mars—a plagioclase–olivine-clinopyroxenite (also olivine-gabbro/diabase or poikilitic shergottite).

This meteorite is related to the small martian poikilitic shergottite group, the members of which are generally considered to be plutonicGeology: Igneous intrusive body that forms when magma is injected into host rocks and solidifies. Plutons occur in the crust of asteroids undergoing differentiation or planets. Named after Pluto, the Roman god of the underworld. Plutonic rocks are the rocks found within a pluton. Astronomy: Category of planet including all, ultramaficTerm used for silicate minerals with cations predominantly Mg and/or Fe. Mafic minerals are dominated by plagioclase and pyroxene, and also contain smaller amounts of olivine., olivine–clinopyroxenites according to IUGS nomenclature. As is the case for the martian meteorites RBT 04262/261 and NWA 4468, NWA 2646 is a basaltic rock containing less olivineGroup of silicate minerals, (Mg,Fe)2SiO4, with the compositional endpoints of forsterite (Mg2SiO4) and fayalite (Fe2SiO4). Olivine is commonly found in all chondrites within both the matrix and chondrules, achondrites including most primitive achondrites and some evolved achondrites, in pallasites as large yellow-green crystals (brown when terrestrialized), in the silicate portion and more plagioclaseAlso referred to as the plagioclase feldspar series. Plagioclase is a common rock-forming series of feldspar minerals containing a continuous solid solution of calcium and sodium: (Na1-x,Cax)(Alx+1,Si1-x)Si2O8 where x = 0 to 1. The Ca-rich end-member is called anorthite (pure anorthite has formula: CaAl2Si2O8) and the Na-rich end-member is albite (in the form of maskelyniteNatural glass composed of isotropic plagioclase produced during shock metamorphism (not melting) at pressures of ~30 GPa. Maskelynite is commonly found in shergottites though also found in some ordinary chondrites, HED and lunar meteorites. It is also found in association with meteorite impact craters and crater ejecta. Named after British) than those amounts required to conform to the IUGS definition for a terrestrial lherzolite. Each of these martian meteorites share some mineralogical characteristics with the poikilitic shergottite group (Walton et al., 2012), and they might have a genetic relationship. Northwest Africa 2646 in particular is related to the martian poikilitic shergottite group through geochemical properties such as trace elementSubstance composed of atoms, each of which has the same atomic number (Z) and chemical properties. The chemical properties of an element are determined by the arrangement of the electrons in the various shells (specified by their quantum number) that surround the nucleus. In a neutral atom, the number of abundances and isotopic compositions. Moreover, its Rb–Sr age of 167 (±6) m.y. is within the range of ages of the poikilitic shergottite group, a number of olivine-free enriched basaltic shergottitesIgneous stony meteorite with a Martian origin consisting mainly of plagioclase (or a shocked glass of plagioclase composition) and pyroxene. They are the most abundant type of SNC meteorites and the type member is the Shergotty meteorite, which fell in India in 1865. Shergottites are igneous rocks of volcanic or, and at least one olivine-phyric shergottite (NWA 1068) (Shih et al., 2009).

Interestingly, the unique characteristics observed in NWA 2646, which are inconsistent with those of other established martian meteoriteOver 30 of the meteorites found on Earth almost certainly came from Mars (see http://www.imca.cc/mars/martian-meteorites.htm and http://www2.jpl.nasa.gov/snc/). All but one belongs to the group known as SNC meteorites, which includes the shergottites, nakhlites, and chassignites. SNC meteorites contain minerals that crystallized within the past 1.35 to 0.15 Ga, making them groupings, has led the editor of the Meteoritical Bulletin Database to recommend the use of the less-than-descriptive classification term ‘Martian’. It has been revealed that NWA 2646 bears some close similarities to the Antarctic martian meteorites RBT 04262 and NWA 4468 (see formation information on the NWA 1950 page).

More recently, in an effort to rectify the discrepencies that exist in martian meteorite nomenclature, the textural term ‘poikilitic’ was proposed by Walton et al. (2012) to apply to those meteorites previously referred to as ‘lherzolitic’ shergottites, which is to be used along with additional descriptive terms for bulk major element compositions (based on a plot of Mg/[Mg + Fe] vs. CaO, where this ratio increases along the sequence from maficOne of the two broad categories of silicate minerals, the other being felsic, based on its magnesium (Mg) and/or iron (Fe) content. Mafic indicates silicate minerals that are predominantly comprised of Mg and/or Fe.The term is derived from those major constituents: Magnesium + Ferrum (Latin for iron) + ic (having to permafic to ultramafic) and trace element content (based on the enrichment of HREE over LREE, increasing along the sequence from depleted to intermediate to enriched).

After Irving et al. (2010), Walton et al. (2012), and Dr. Anthony Irving’s List of Martian Meteorites A modal analysis of NWA 2646 revealed that it has a heterogeneous composition, consisting of the pyroxenes pigeoniteLow-Ca clinopyroxene, (Ca,Mg,Fe)SiO3, found as a major mineral in eucrites and shergottites. In order to be considered pigeonite, the clinopyroxene must contain 5 to 20 mol % of calcium (Wo5 - 20). Chondrites of petrologic types 4 and below contain significant low-Ca clinopyroxene. During metamorphism to higher temperatures, all existing (40.7 vol%) and augiteHigh-Ca clinopyroxene, (Ca,Mg,Fe)SiO3, that occurs in many igneous rocks, particularly those of basaltic composition. In order to be considered augite, the clinopyroxene must contain 20 to 45 mol % of calcium (Wo20 - 45). An important and unique Martian meteorite is NWA 8159, that has been classified as an augite basalt. (24.3 vol%) together with olivine (21.6 vol%) and maskelynite (11.4 vol%). Minor phases include chromiteBrownish-black oxide of chromium and iron (Cr-Fe oxide), Cr2FeO4, found in many meteorite groups., ilmeniteTi-Fe oxide, TiFeO3, found in achondrites, lunar mare basalts, and shergottites. Ilmenite forms as a primary mineral in mafic igneous rocks. It crystallizes relatively early out of a magma before most of the other minerals, and as a result, the heavier crystals of ilmenite precipitate to the bottom of the magma, merillite, and pyrrhotiteIron sulfide group of minerals whose composition ranges widely between its end members pyrrhotite (Fe7S8) whose crystal structure is monoclinic, and troilite (FeS) whose crystal structure is hexagonal. Its general formula is Fe1−xS (where x = 0 to 0.17). The troilite phase is found mainly in meteorites and in the. It contains a higher abundance of plagioclase in the form of maskelynite than other members of the martian poikilitic shergottite group with the exception of RBT 04262 and NWA 4468. Possible pre-terrestrial secondary hydrous alteration products are present, including calcite and chlorides.

The CRE age for NWA 2646 based on 10Be, an isotopeOne of two or more atoms with the same atomic number (Z), but different mass (A). For example, hydrogen has three isotopes: 1H, 2H (deuterium), and 3H (tritium). Different isotopes of a given element have different numbers of neutrons in the nucleus. that is produced by local irradiation of the proto-Sun, has been calculated to be 2.5–3.1 m.y. This is similar to several other martian meteorites including NWA 1068 and NWA 1460 (Nishiizumi and Caffee, 2006), and is also similar to the group of poikilitic shergottites (Walton and Herd, 2007). However, cosmic ray exposure ages have now been determined for many martian meteorites, and Mahajan (2015) compiled a chart based on the reported CRE ages for 53 of them. He concluded that together these 53 meteorites represent 10 distinct impact events dated at 0.92 m.y., 2.12 m.y., 2.77 m.y., 4.05 m.y., 7.3 m.y., 9.6 m.y., 11.07 m.y., 12.27 m.y., 15 m.y., and 16.73 m.y. before present—see his chart here. Although NWA 2646 was not included in his study group, the CRE age shown above is most consistent with the impact-ejection event 2.77 m.y. before present time. However, Weiler et al. (2016) conducted noble gasElement occurring in the right-most column of the periodic table; also called "inert" gases. In these gases, the outer electron shell is completely filled, making them very unreactive. analyses on several meteorites including NWA 2646, with consideration of the shielding parameter (i.e., meteoroidSmall rocky or metallic object in orbit around the Sun (or another star). size and sample depth) that affects the calculation of the CRE age. Employing their preferred model for determination of CRE age based on the mean of calculated 3He, 21Ne, and 38Ar production rates, they derived an age of 3.9 m.y. before present; this CRE age is more consistent with the impact event at 4.05 m.y. before present. In a subsequent review based on multiple criteria, Irving et al. (2017 [#2068]) made a new determination of the number of separate launch events associated with the known (101 at the time of their study) martian meteorites. They speculate that the number could be as few as twenty, and suggest that NWA 2646 and at least 14 other intermediate poikilitic shergottites were ejected in a common impact event unique from the others.

The specimen of NWA 2646 shown above is a 0.42 g fragment with a portion of the natural outer surface. The photos below show two views of the main massLargest fragment of a meteorite, typically at the time of recovery. Meteorites are commonly cut, sliced or sometimes broken thus reducing the size of the main mass and the resulting largest specimen is called the "largest known mass"., along with a thin sectionThin slice or rock, usually 30 µm thick. Thin sections are used to study rocks with a petrographic microscope. in cross-polarized light. 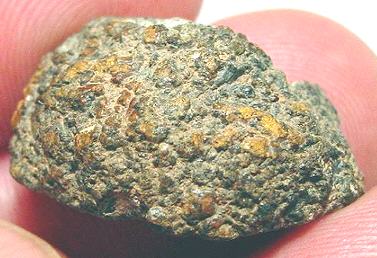 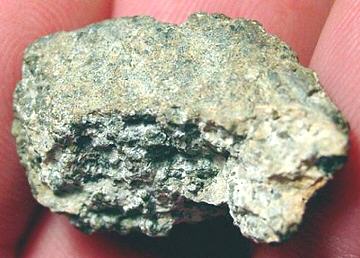 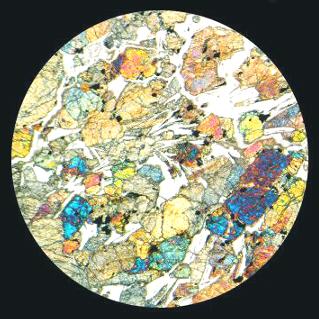