Martian ChassigniteThe group is part of the SNC martian trio and named after the meteorite seen to fall in Chassigny, France, in 1815. Its subsequent recovery led to it being one of the first meteorites to be recognized as a genuine rock from space. Chassigny resembles a terrestrial dunite - a Click on Term to Read More
Dunite 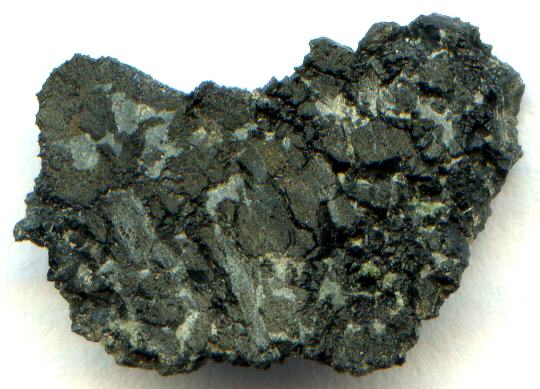 click on photo for a magnified view Found August 2000 Nine rock fragments constituting a single 611 g stone were found in the Moroccan Sahara by meteoriteWork in progress. A solid natural object reaching a planet’s surface from interplanetary space. Solid portion of a meteoroid that survives its fall to Earth, or some other body. Meteorites are classified as stony meteorites, iron meteorites, and stony-iron meteorites. These groups are further divided according to their mineralogy and Click on Term to Read More hunters under the organization of Bruno Fectay and Carine Bidaut. These black fragments were not recognized as meteoritic until several years later, at which time a sample was submitted for analysis. The importance of this meteorite was soon evident, and multiple analyses were conducted through a collaboration of research groups in France and elsewhere:

With the assigned name of NWA 2737, this olivine–chromiteBrownish-black oxide of chromium and iron (Cr-Fe oxide), Cr2FeO4, found in many meteorite groups. Click on Term to Read More cumulateIgneous rock composed of crystals that have grown and accumulated (often by gravitational settling) in a cooling magma chamber. Click on Term to Read More was classified as a dunite that exhibits many mineralogical, chemical, and petrographical similarities to the first known martian chassignite that fell in Chassigny, France in 1815. A third chassignite designated NWA 8694 (photo courtesy of L. Labenne) has been classified at the Museum National d’Histoire Naturelle, Paris, France (Hewins et al., 2014, 2015). Northwest Africa 2737 is composed of 89.6 vol% shock-blackened, cumulus forsteritic olivineGroup of silicate minerals, (Mg,Fe)2SiO4, with the compositional endpoints of forsterite (Mg2SiO4) and fayalite (Fe2SiO4). Olivine is commonly found in all chondrites within both the matrix and chondrules, achondrites including most primitive achondrites and some evolved achondrites, in pallasites as large yellow-green crystals (brown when terrestrialized), in the silicate portion Click on Term to Read More, 3.1 vol% chromite, 1.6 vol% sanidine, 1.0 vol% pyroxeneA class of silicate (SiO3) minerals that form a solid solution between iron and magnesium and can contain up to 50% calcium. Pyroxenes are important rock forming minerals and critical to understanding igneous processes. For more detailed information, please read the Pyroxene Group article found in the Meteoritics & Classification Click on Term to Read More (augiteHigh-Ca clinopyroxene, (Ca,Mg,Fe)SiO3, that occurs in many igneous rocks, particularly those of basaltic composition. In order to be considered augite, the clinopyroxene must contain 20 to 45 mol % of calcium (Wo20 - 45). An important and unique Martian meteorite is NWA 8159, that has been classified as an augite Click on Term to Read More, pigeoniteLow-Ca clinopyroxene, (Ca,Mg,Fe)SiO3, found as a major mineral in eucrites and shergottites. In order to be considered pigeonite, the clinopyroxene must contain 5 to 20 mol % of calcium (Wo5 - 20). Chondrites of petrologic types 4 and below contain significant low-Ca clinopyroxene. During metamorphism to higher temperatures, all existing, and orthopyroxeneOrthorhombic, low-Ca pyroxene common in chondrites. Its compositional range runs from all Mg-rich enstatite, MgSiO3 to Fe-rich ferrosilite, FeSiO3. These end-members form an almost complete solid solution where Mg2+ substitutes for Fe2+ up to about 90 mol. % and Ca substitutes no more than ~5 mol. % (higher Ca2+ contents occur Click on Term to Read More), and 0.2 vol% phosphate. Carbonates are present in both chassignitesThe group is part of the SNC martian trio and named after the meteorite seen to fall in Chassigny, France, in 1815. Its subsequent recovery led to it being one of the first meteorites to be recognized as a genuine rock from space. Chassigny resembles a terrestrial dunite - a Click on Term to Read More, with at least some of them showing evidence for a martian origin—shock fractures post-date the carbonateMineral or compound containing carbon and oxygen (i.e. calcium carbonate, CaCO3, calcite). Click on Term to Read More formation (Beck et al., 2006). Both chassignites have similar REEOften abbreviated as “REE”, these 16 elements include (preceded by their atomic numbers): 21 scandium (Sc), 39 Yttrium (Y) and the 14 elements that comprise the lanthanides excluding 61 Promethium, an extremely rare and radioactive element. These elements show closely related geochemical behaviors associated with their filled 4f atomic orbital. Click on Term to Read More patterns, elements that are carried mostly in their apatite component. A martian origin is attested by the abundance ratioLogarithm of the ratio of two metallic elements in a star relative to their ratio in the Sun. This is used to quantify the relative amounts of individual elements present in a star. For example, the abundance ratio of Mg to Fe, written [Mg/Fe], is: Chemical elements are produced through Click on Term to Read More of Fe/Mn in olivine, the bulk Na/Al ratios, and by the O-isotopic ratios. 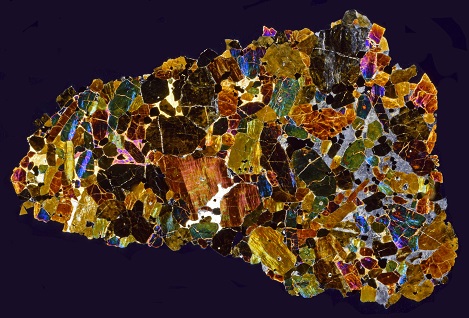