Logarithm of the ratio of two metallic elements in a starSelf-luminous object held together by its own self-gravity. Often refers to those objects which generate energy from nuclear reactions occurring at their cores, but may also be applied to stellar remnants such as neutron stars. relative to their ratio in the SunOur parent star. The structure of Sun's interior is the result of the hydrostatic equilibrium between gravity and the pressure of the gas. The interior consists of three shells: the core, radiative region, and convective region. Image source: http://eclipse99.nasa.gov/pages/SunActiv.html. The core is the hot, dense central region in which the. This is used to quantify the relative amounts of individual elements present in a star. For example, the abundance ratio of Mg to Fe, written [Mg/Fe], is: 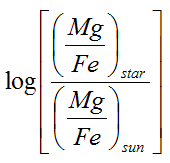