AngriteType of evolved achondrite meteorite that represent some of the earliest stages of asteroidal differentiation and magmatism in our solar system. Angrites are named for the Angra dos Reis meteorite, which fell in Rio de Janeiro, Brazil, in early 1869. They are basaltic (mafic) rocks, often containing porous areas, and Click on Term to Read More
Sub-volcanic/Metamorphic 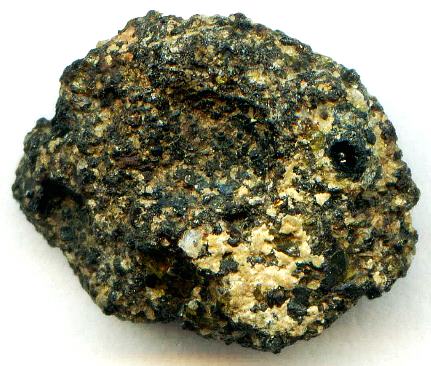 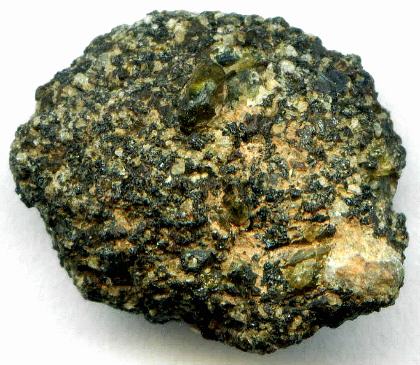 click on photos for a magnified view
Found 2015
no coordinates recorded A 202.5 g friable stone lacking fusion crustMelted exterior of a meteorite that forms when it passes through Earth’s atmosphere. Friction with the air will raise a meteorite’s surface temperature upwards of  4800 K (8180 °F) and will melt (ablate) the surface minerals and flow backwards over the surface as shown in the Lafayette meteorite photograph below. Click on Term to Read More but with adhering desert soil was found in Morocco and ultimately sold to D. Pitt. Analysis and classification was conducted at the University of New Mexico (Agee et al.), and NWA 10463 was determined to be a previously unsampled angriteType of evolved achondrite meteorite that represent some of the earliest stages of asteroidal differentiation and magmatism in our solar system. Angrites are named for the Angra dos Reis meteorite, which fell in Rio de Janeiro, Brazil, in early 1869. They are basaltic (mafic) rocks, often containing porous areas, and Click on Term to Read More lithology. A number of smaller paired stones and tiny fragments were recovered during further searches, including a 14 g stone classified as NWA 10646.

Northwest Africa 10463 is a coarse-grained polycrystalline aggregate composed of Al–Ti-rich clinopyroxene (~28 vol%), both high-Fe and high-Ca olivineGroup of silicate minerals, (Mg,Fe)2SiO4, with the compositional endpoints of forsterite (Mg2SiO4) and fayalite (Fe2SiO4). Olivine is commonly found in all chondrites within both the matrix and chondrules, achondrites including most primitive achondrites and some evolved achondrites, in pallasites as large yellow-green crystals (brown when terrestrialized), in the silicate portion Click on Term to Read More (~26 vol%), and plagioclaseAlso referred to as the plagioclase feldspar series. Plagioclase is a common rock-forming series of feldspar minerals containing a continuous solid solution of calcium and sodium: (Na1-x,Cax)(Alx+1,Si1-x)Si2O8 where x = 0 to 1. The Ca-rich end-member is called anorthite (pure anorthite has formula: CaAl2Si2O8) and the Na-rich end-member is albite Click on Term to Read More (~37 vol%), along with minor phases including oxides (3 vol% spinelMg-Al oxide, MgAl2O4, found in CAIs. and Fe–Ti-oxides), troiliteBrass colored non-magnetic Fe sulfide, FeS, found in a variety of meteorites. (3 vol%), and silico-phosphate (<1 vol%), the latter resolved by Mikouchi et al. (2011) to be silico-apatite in other angrites (Agee et al., 2015; Santos et al., 2016). This angrite exhibits textural features, including chemically zoned olivines (Fa41.6 cores to Fa59.1 rims), thin exsolutionSegregation, during cooling, of a homogeneous solid solution into two or more different solids. Click on Term to Read More lamellae in olivine, and chemically zoned spinels (Al-rich cores to Cr-rich rims; Santos et al., 2017), which are indicative of relatively fast cooling at depth. In many ways these features are similar to the angrites NWA 4590 and LEW 86010 which have been termed sub-volcanic/metamorphic (McKay et al., 1998).

The chemistry of NWA 10463 indicates that post-crystallization metamorphicRocks that have recrystallized in a solid state due to changes in temperature, pressure, and chemical environment. Click on Term to Read More processing (i.e., re-equilibration) occurred which is manifest in the fractionationConcentration or separation of one mineral, element, or isotope from an initially homogeneous system. Fractionation can occur as a mass-dependent or mass-independent process. Click on Term to Read More and redistribution of divalent and trivalent 53Cr from olivine into other phases (Papike et al., 2016). This metamorphism has affected the Mn–Cr chronometer, reducingOxidation and reduction together are called redox (reduction and oxidation) and generally characterized by the transfer of electrons between chemical species, like molecules, atoms or ions, where one species undergoes oxidation, a loss of electrons,  while another species undergoes reduction, a gain of electrons. This transfer of electrons between reactants Click on Term to Read More its usefulness in dating the crystallizationPhysical or chemical process or action that results in the formation of regularly-shaped, -sized, and -patterned solid forms known as crystals. Click on Term to Read More of angrites. Santos et al. (2016) found that olivine in NWA 10463 contains Ca that spans a larger range than in other angrites, and they suggest that the meteoriteWork in progress. A solid natural object reaching a planet’s surface from interplanetary space. Solid portion of a meteoroid that survives its fall to Earth, or some other body. Meteorites are classified as stony meteorites, iron meteorites, and stony-iron meteorites. These groups are further divided according to their mineralogy and Click on Term to Read More could have experienced a unique petrogenetic history (see diagram below). 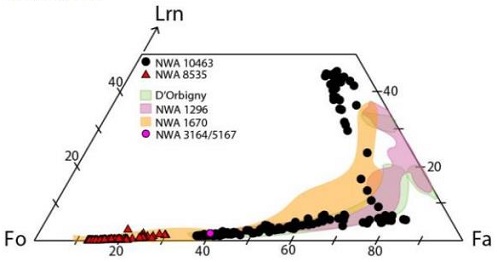 It was proposed by A. Irving and S. Kuehner (2007) that one or more severe collisional impacts onto the angrite parent bodyThe body from which a meteorite or meteoroid was derived prior to its ejection. Some parent bodies were destroyed early in the formation of our Solar System, while others like the asteroid 4-Vesta and Mars are still observable today. Click on Term to Read More resulted in the stripping of a significant fraction of its crustOutermost layer of a differentiated planet, asteroid or moon, usually consisting of silicate rock and extending no more than 10s of km from the surface. The term is also applied to icy bodies, in which case it is composed of ices, frozen gases, and accumulated meteoritic material. On Earth, the Click on Term to Read More and upper mantleMain silicate-rich zone within a planet between the crust and metallic core. The mantle accounts for 82% of Earth's volume and is composed of silicate minerals rich in Mg. The temperature of the mantle can be as high as 3,700 °C. Heat generated in the core causes convection currents in Click on Term to Read More, accompanied by dissemination of large sections of this material into a stable orbitThe elliptical path of one body around another, typically the path of a small body around a much larger body. However, depending on the mass distribution of the objects, they may rotate around an empty spot in space • The Moon orbits around the Earth. • The Earth orbits around Click on Term to Read More during the past 4+ b.y. This storage location might lie within the main asteroid beltBelt located between 2.12 and 3.3 AU from the Sun and located between the orbits of Mars and Jupiter containing the vast majority of asteroids. The asteroid belt is also termed the main asteroid belt or main belt to distinguish it from other asteroid populations in the Solar System such Click on Term to Read More, or alternatively, the material could remain associated with the original collisionally-stripped parent body postulated by some to be the planetThe term "planet" originally comes from the Greek word for "wanderer" since these objects were seen to move in the sky independently from the background of fixed stars that moved together through the seasons. The IAU last defined the term planet in 2006, however the new definition has remained controversial. Click on Term to Read More Mercury (see schematic diagram below). The disparity that exists in FeO content between the angrite group of meteorites (up to 25 wt%) and the surface of Mercury (~5 wt%) may reflect the existence of a redoxOxidation and reduction together are called redox (reduction and oxidation) and generally characterized by the transfer of electrons between chemical species, like molecules, atoms or ions, where one species undergoes oxidation, a loss of electrons,  while another species undergoes reduction, a gain of electrons. This transfer of electrons between reactants Click on Term to Read More gradient in which the lower mantle region, now the present surface of Mercury, has a more magnesian composition.

Diagram credit: A. Irving and S. Kuehner, Workshop on Chronology of Meteorites, #4050 (2007)
While this angrite could be a piece of ‘Maia’, mother of Hermes (Mercury), an alternate hypothesis speculates that it might represent a piece of ‘Theia’, mother of Selene (the Moon goddess). In a new study of the Fe/Mn ratio in olivine grains for a number of angrites, Papike et al. (2017) determined that these meteorites plot along a trend line between the Earth and Moon, which indicates the possible location of the angrite parent body (see diagram below). 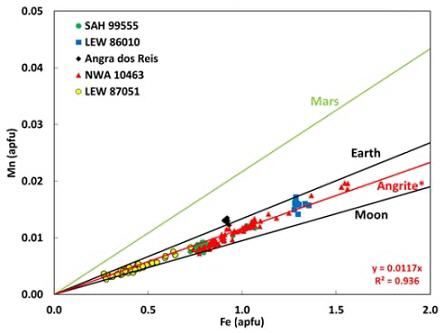 Diagram credit: Papike et al., 48th LPSC, #2688 (2017)
In connection with their in-depth study of NWA 5363/5400, Burkhardt et al. (2017) published comparative data for nucleosynthetic anomalies among parent bodies for O, Cr, Ca, Ti, Ni, Mo, Ru and Nd. It is interesting to note that with the exception of Îµ48Ca (no angrite data for Îµ100Ru), NWA 5363/5400 and angrites have values for each of these isotopic anomalies which are nearly the same or overlap within uncertainties. Results of their studies indicate that while both angrites and NWA 5363/5400 have Î”17O values indistinguishable from Earth, and that other anomaly values for angrites overlap with Earth within uncertainties (Îµ92Ni, Îµ92Mo, Îµ145Nd), the Îµ54Cr and Îµ50Ti values of angrites are distinct from Earth. Based on their studies, Burkhardt et al. (2017) concluded that the parent body of NWA 5363/5400, and perhaps by extention that of angrites, originated in a unique nebulaAn immense interstellar, diffuse cloud of gas and dust from which a central star and surrounding planets and planetesimals condense and accrete. The properties of nebulae vary enormously and depend on their composition as well as the environment in which they are situated. Emission nebula are powered by young, massive Click on Term to Read More isotopic reservoir most similar to enstatiteA mineral that is composed of Mg-rich pyroxene, MgSiO3. It is the magnesium endmember of the pyroxene silicate mineral series - enstatite (MgSiO3) to ferrosilite (FeSiO3). Click on Term to Read More and ordinary chondritesChondrites are the most common meteorites accounting for ~84% of falls. Chondrites are comprised mostly of Fe- and Mg-bearing silicate minerals (found in both chondrules and fine grained matrix), reduced Fe/Ni metal (found in various states like large blebs, small grains and/or even chondrule rims), and various refractory inclusions (such Click on Term to Read More. A noteworthy study involving nucleosynthetic vanadium isotopes was conducted by Nielsen et al. (2019). They ascertained that the V isotopeOne of two or more atoms with the same atomic number (Z), but different mass (A). For example, hydrogen has three isotopes: 1H, 2H (deuterium), and 3H (tritium). Different isotopes of a given element have different numbers of neutrons in the nucleus. Click on Term to Read More composition of Earth is significantly heavier than that of any other meteorite group they investigated, attesting to the fact that Earth accreted primarily from a unique non-carbonaceous reservoir not otherwise represented in our meteorite collections.
Vanadium vs. Chromium Isotope Diagram 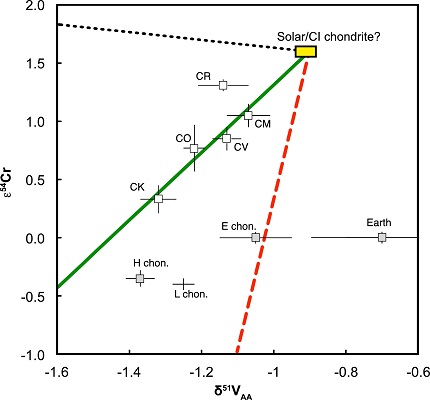 Portions of the angrite asteroid must be in a stable orbit (planetary or asteroid beltBelt located between 2.12 and 3.3 AU from the Sun and located between the orbits of Mars and Jupiter containing the vast majority of asteroids. The asteroid belt is also termed the main asteroid belt or main belt to distinguish it from other asteroid populations in the Solar System such Click on Term to Read More) from which spallationThe formation of new nuclides by interactions of high-energy cosmic ray protons with target nuclei that commonly produce several smaller product nuclides. has continued to occur over the past ~56 m.y. as indicated by the broad range in angrite CRE ages. Notably, Rivkin et al. (2007) have determined that the largest known co-orbiting ‘Trojan’ asteroid of Mars, the 1.3 km-diameter 5261 Eureka located at a trailing Lagrangian point, is a potentially good spectral analog to the angrites (as measured by Burbine et al., 2006) (see diagrams below). They suggest that 5261 Eureka could represent a captured fragment of the disrupted angrite parent body now in a stable orbit around Mars. 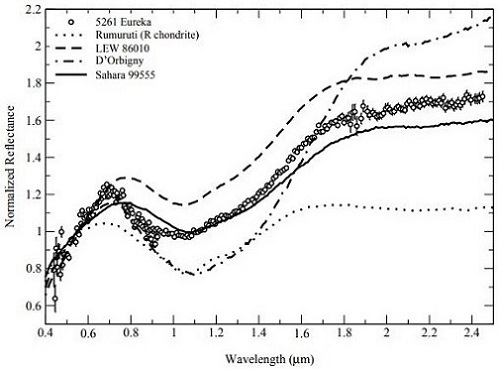 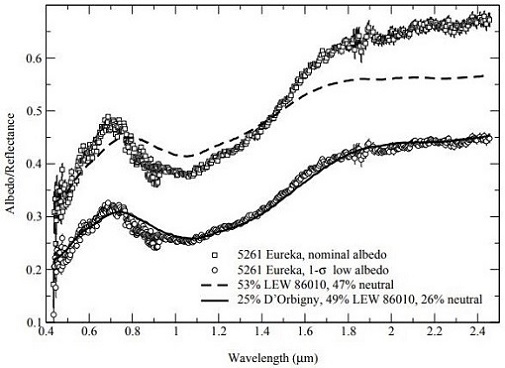 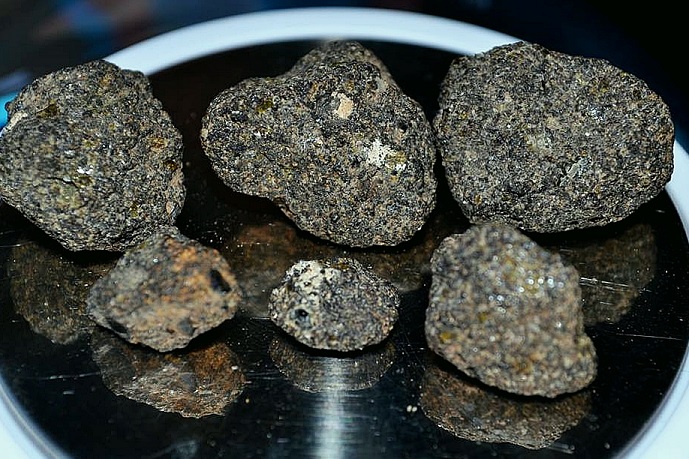