On July 19th 2009 a massive asteroid the size of the Titanic slammed Jupiter, scarring it’s surface, leaving scientists and astronomers with a wealth of information (from a safe distance) but also a stark reminder of the dangers of asteroids orbiting our SunOur parent star. The structure of Sun's interior is the result of the hydrostatic equilibrium between gravity and the pressure of the gas. The interior consists of three shells: the core, radiative region, and convective region. Image source: http://eclipse99.nasa.gov/pages/SunActiv.html. The core is the hot, dense central region in which the. If such an asteroid were to impact Earth in a populated area, it would cause devastation on an unprecedented scale. Fortunately, asteroids of this size hit Earth only about once every 100,000 years.

If an asteroid this size impacted Manhattan Island in New York, it would kill millions of people, destroy the entire island, and cause trillions of dollars in damage. It would produce a craterBowl-like depression ("crater" means "cup" in Latin) on the surface of a planet, moon, or asteroid. Craters range in size from a few centimeters to over 1,000 km across, and are mostly caused by impact or by volcanic activity, though some are due to cryovolcanism. approximately 6.5 km in diameter, and 520 m deep. It would cause 7.0 earthquakes some 10 km away from the epicenter, and produces winds (airblast) of 1 km/s (3600 km/hr) or more.

All buildings within the impact zone would be destroyed and most buildings and bridges out to a radius of 10 km would be obliterated and/or collapse. Then 30 seconds after the impact, at 10 km, large bus sized pieces of rock ejectaFractured and/or molten rocky debris thrown out of a crater during a meteorite impact event, or, alternatively, material, including ash, lapilli, and bombs, erupted from a volcano. material would start to rain down on those who survived the initial impact. 1 minute and 20 km away, car sized debris would rain down, buildings and bridges would collapse, and 90% of trees would be blown down or stripped of limbs.

Anyone having a hard time imagining this level of destruction need only see pictures of the aftermath of the Mount St. Helens volcanicIgneous rock that forms from cooling magma on the surface of a planet or asteroid. eruption in 1980. More pictures can be seen here.

Even at 50 km (30 miles) away, ejecta debris would be the size of basketballs, and the winds (airblast) would be the equivalent to Category 5 hurricane.

100 km away from the center of impact, golfball sized pieces of earth will rain down, winds will reach approximately 125 km/hr and more people will be injured or killed by falling debris, and building collapse.

Jupiter is our big brother, helping defend our planetThe term "planet" originally comes from the Greek word for "wanderer" since these objects were seen to move in the sky independently from the background of fixed stars that moved together through the seasons. The IAU last defined the term planet in 2006, however the new definition has remained controversial. from these events by drawing them into Jupiter’s massive gravityAttractive force between all matter - one of the four fundamental forces. well. It acts as a kind of asteroid magnet. But it can also tug at distant asteroids as well, drawing them into Earth crossing orbits.

Asteroid hunters findMeteorite not seen to fall, but recovered at some later date. For example, many finds from Antarctica fell 10,000 to 700,000 years ago. and catalog asteroids through networks of telescopes all over our planet. But this is very difficult work as asteroids are dark objects against the dark blackness of space. Wide angle telescopes like WISE have found many asteroids in the past and continue to locate more each day. The number of asteroids out there is mind boggling, and some scientists have estimated the number of asteroids in the main asteroid beltBelt located between 2.12 and 3.3 AU from the Sun and located between the orbits of Mars and Jupiter containing the vast majority of asteroids. The asteroid belt is also termed the main asteroid belt or main belt to distinguish it from other asteroid populations in the Solar System such between Mars and Jupiter to be in the billions or even trillions. The point being no one knows how many are out there. The number of asteroids being discovered on a daily basis is increasing exponentially.

Video of asteroid discoveries since 1980 through 2014. 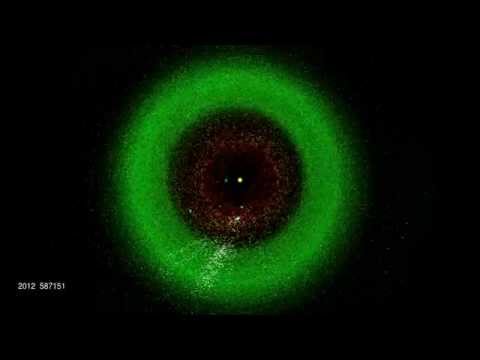 Defending Earth from an asteroid impact starts in space. We must first look, before we can see, discover, destroy, or deflect an asteroid (impactor) on a collision course with our planet.

This is where meteorites come in. Meteorites are pieces of asteroids, and the study of the composition of meteorites may help to determine how to better defend our home from large impactors. Not only do meteorites hold within them the wonders on the universeThat which contains and subsumes all the laws of nature, and everything subject to those laws; the sum of all that exists physically, including matter, energy, physical laws, space, and time. Also, a cosmological model of the universe., they can possibly tell us how to defend our planet, and allow us to prepare for the inevitable. Knowing ahead of time how we’re going to deal with it when that time comes is the most important thing on the face of this planet. Our very existence depends on it. It’s not a matter of IF a large asteroid will impact, it’s a matter of WHEN.