Class of variable starStar whose luminosity varies over time. Broadly speaking, variable stars are of two types: (1) stars that are intrinsically variable, that is, their luminosity actually changes, for example because the star periodically swells and shrinks; (2) eclipsing and rotating variables, where the apparent changes in brightness are a perspective effect. characterized by modest luminosityBasic property used to characterize stars, luminosity is defined as the total energy radiated by a star each second. An object’s luminosity is often compared to that of the Sun (Lsun = 4 × 1033 ergs/s = 3.9 × 1026 Watts). Luminosity has the same units as power (energy per variations (from 0.001 to 0.2 magnitudes or 0.1% to 20% of their average luminosities) and periods of 30 to 1,200 seconds. Their location on the Hertzsprung-Russell diagram identifies them as white dwarfRemnant of a star with mass <8 Msun. White dwarfs have masses <1.4 Msun (the Chandrasekhar mass) and are supported by electron degeneracy pressure. White dwarfs have radii ~Rearth (<0.02 Rsun) and densities ~105-6 g/cm3. No nuclear fusion or gravitational contraction occurs in white dwarfs, they shine by residual heat. stars that have entered the instability strip as they evolve along the white dwarf track. ZZ ceti stars are also known as DAV stars. ZZ Ceti stars evolve from intermediate mass stars (6 to 8 Msun) that have managed to retain hydrogenLightest and most common element in the universe (~92% by atoms; ~75% by mass). Hydrogen's isotopes are: • 1H (99.9885 %)
• 2H (0.0115 %), also called deuterium.
• 3H, also called Tritium, is a radioactive (t½ = 12.32 y) by-product of atmospheric thermonuclear tests in Earth's hydrosphere and atmosphere.
in their outer envelopes. This type of white dwarf is classified as a DA white dwarf, as opposed to DB white dwarfs that have heliumHelium (He) Second lightest and second most abundant element (after Hydrogen) in the universe. The most abundant isotope is 4He (99.9998%), 3He is very rare. Helium comprises ~8% of the atoms (25% of the mass) of all directly observed matter in the universe. Helium is produced by hydrogen burning inside, but no hydrogen in their outer envelopes (hence the alternative name DAV stars). The surface temperatures of ZZ Ceti stars are ~12,000
K. The pulsations responsible for their variability are the result of the ionizationProcess whereby atoms lose one or more electrons to become cations. Ionization occurs by ionizing radiation or if an atom suffers a sufficiently violent collision. The “ionization potential” is the minimum amount of energy needed to remove an electron to infinity from the ground state. If the electron has already and then recombination of hydrogen in the outer envelope. 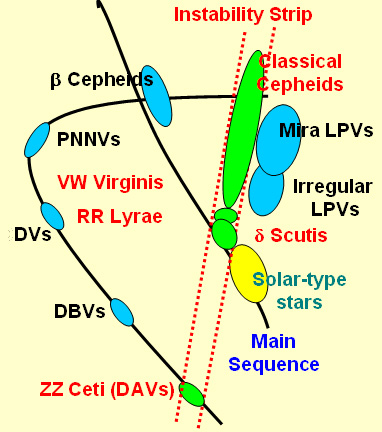