Largest and nearest galaxy clusterGroup of galaxies which are mutually gravitationally bound. There are two important types of galaxy clusters: Regular and Irregular Galaxy Clusters. Regular clusters are huge spherical groupings of galaxies with large numbers of galaxies concentrated in their centers. They tend to contain thousands of galaxies and to have many bright to the Local Group. The Local Group is often considered to lie on the edge of the Virgo cluster. The Virgo Cluster is approximately 16 Mpc distant and spans 8° on the sky. Its mass is ~1 x 1014 Msun, and it contains ~ 2,000 galaxies, with many more spiral galaxies than typical for a cluster of this size. There are three clearly identifiable sub-clusters (centered on M87, M86, and M49) and has an irregular X-ray haloHalo of high temperatures X-ray emitting gas (106 to 10 x 106 K) surrounding most large elliptical galaxies. Although found predominantly around massive elliptical galaxies, weaker X-ray halos have also been detected around starburst galaxies and more recently around spiral galaxies similar to the Milky Way. The photograph (right) shows (image), suggesting that the cluster is still forming. 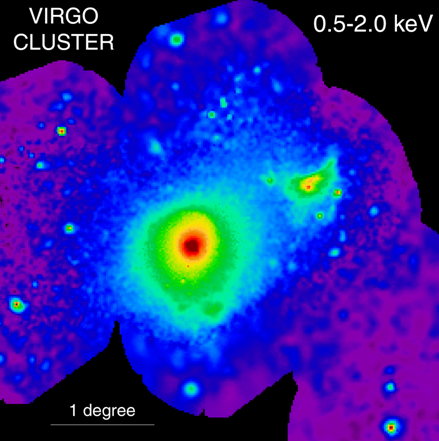