Asteroid (or satelliteBody in orbit (such as a moon) around another larger body (such as a planet or star).) that orbits a body at one of the Lagrange points 60º ahead (L4) or behind (L5) a secondary body. Although Trojan asteroids have been discovered for Mars (5, all at L5) and Neptune (2), the term generally refers to the ~1800 asteroids accompanying Jupiter (~60% at L4). Although the Trojans are stabilized at the Lagrangian points by gravitational interactions with Jupiter and the SunOur parent star. The structure of Sun's interior is the result of the hydrostatic equilibrium between gravity and the pressure of the gas. The interior consists of three shells: the core, radiative region, and convective region. Image source: http://eclipse99.nasa.gov/pages/SunActiv.html. The core is the hot, dense central region in which the, their actual distribution is elongated along the orbitThe elliptical path of one body around another, typically the path of a small body around a much larger body. However, depending on the mass distribution of the objects, they may rotate around an empty spot in space • The Moon orbits around the Earth. • The Earth orbits around. Perturbations from other planets (primarily Saturn) cause the Trojans to oscillate around L4 and L5 by 15-20° and inclinations up to 40° to the orbital plane. These oscillations generally take 150-200 years to complete. The absence of Trojans at the Lagrangian points of Saturn most likely results from Jupiter removing them from these stable orbits through gravitational perturbations. Other examples of Trojan bodies in the solar systemThe Sun and set of objects orbiting around it including planets and their moons and rings, asteroids, comets, and meteoroids. include daughter satellites that orbit in the Trojan points of the Saturn-Tethys systemDefinable part of the universe that can be open, closed, or isolated. An open system exchanges both matter and energy with its surroundings. A closed system can only exchange energy with its surroundings; it has walls through which heat can pass. An isolated system cannot exchange energy or matter with, and an additional satellite (Helene) which orbits in the forward Trojan point of Saturn and Dione. 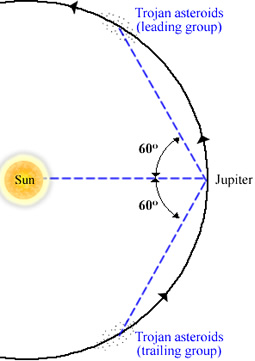