Features believed to exist in some, but not all disk galaxies; it clear whether the thick disk of the Milky Way GalaxyConcentration of 106 to 1012 stars, dust and gas, that are gravitationally bound. Our galaxy contains ~2 × 1011 stars. There are four main types of galaxies: • Elliptical
• Lenticular
• Spiral
• Irregular
is typical of thick disks in other spiral galaxies. The thick disk contains about 10% of the stellar mass of the Milky Way and has a scale height of ~1,000 light years (the thin diskThe defining morphological component of disk galaxies in general and spiral galaxies in particular. The thin disk contains stars, star clusters, gas and dust confined to the galaxy's plane of rotation. There is much more information on the disk of the Milky Way than for spiral galaxies, but the disk has a scale height of only ~400 light years). The greater scale height of the thick disk results from it being ‘kinematically hotter’ than the thin disk; thick disk stars are, on average, moving ~20 km/sec faster in a vertical direction with respect to the galactic plane than thin disk stars. In contrast, thick disk stars rotate about the Galactic center more slowly than the thin disk stars by ~40 km/sec.

The stars in thick disks are almost all older than 10 Ga. Metallicities of thick disk stars range from ~1/10–1/2 that of the SunOur parent star. The structure of Sun's interior is the result of the hydrostatic equilibrium between gravity and the pressure of the gas. The interior consists of three shells: the core, radiative region, and convective region. Image source: http://eclipse99.nasa.gov/pages/SunActiv.html. The core is the hot, dense central region in which the, with a typical value of ~1/4 solar (thin disk values range from 1/3–3 times solar. Both the differing age and chemical properties of the stellar populations suggests that the formation scenarios for the thin and thick disks were different. The thick disk probably formed early in the Galaxy’s history and then ceased all starSelf-luminous object held together by its own self-gravity. Often refers to those objects which generate energy from nuclear reactions occurring at their cores, but may also be applied to stellar remnants such as neutron stars. formation. The thin disk formed later and continues to form stars to this day.

The thick disk may have formed as the result of a significant merger event early in the Milky Way’s history. If this is the case, the event must have taken place before the thin disk had fully formed, as both observations and N-body modeling indicate such events disrupt the disk and consume a significant fraction of the cold gas in a burst of new star formation. The presence of a substantial, uniform disk in modern times therefore indicates that any major merger must have taken place long ago. As an alternative, the thick disk formed relatively slowly by the actions of multiple minor mergers. The gas would collapse back into the galactic plane forming a thin disk, but the stars would retain the larger scale height of a thick disk. The Milky Way is currently undergoing at least two minor mergers, with the Sagittarius and Canis Major dwarf galaxies, suggesting that this could be a real possibility. However, the lack of young stars in the thick disk would again suggest that such processes must have stopped, or at least significantly slowed, a long time ago. 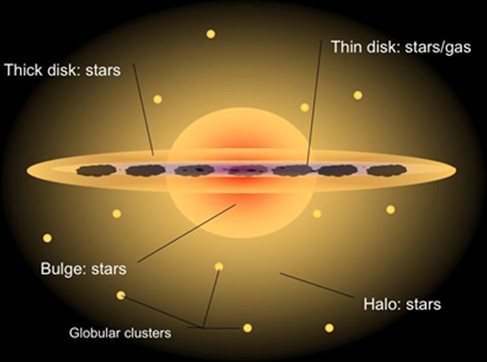