GalaxyConcentration of 106 to 1012 stars, dust and gas, that are gravitationally bound. Our galaxy contains ~2 × 1011 stars. There are four main types of galaxies: • Elliptical
• Lenticular
• Spiral
• Irregular
with spiral arms. These are classified based on their appearance in optical light, into those in which the arms radiated from a central bulge (classic spirals, S), and those where the arms radiated from a central barUnit of pressure equal to 100 kPa. (barred spirals, SB). Both types of spiral galaxies have a central bulge of old stars surrounded by a flattened disk of young stars, gas and dust. These regions are obvious in color images of face-on spirals: the central bulge or bar is yellow (older stars), whereas bright nebulaeAn immense interstellar, diffuse cloud of gas and dust from which a central star and surrounding planets and planetesimals condense and accrete. The properties of nebulae vary enormously and depend on their composition as well as the environment in which they are situated. Emission nebula are powered by young, massive and young blue stars trace out the spiral arms within the disk. Dust is also visible in edge-on spirals as dark lanes, similar to the dark lanes we see in our own Milky Way when we observe the night sky. 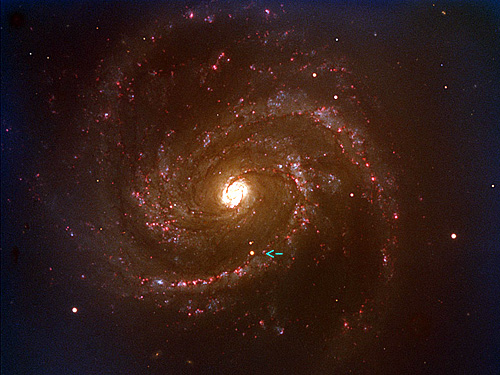 SupernovaStellar explosion that expels much or all of the stellar material with great force, driving a blast wave into the surrounding space, and leaving a supernova remnant. Supernovae are classified based on the presence or absence of features in their optical spectra taken near maximum light. They were first categorized in M100 (arrow). Image source: http://zuserver2.star.ucl.ac.uk/~idh/apod/ap060307.html.

Spiral galaxies are classified using the Hubble Classification Scheme (q.v.). Classes include Sa/SBa, Sb/SBb or Sc/SBc (classic/barred) according to the tightness of their spiral, the clumpiness of their spiral arms, and the size of their central bulge. These differences reflect the relative amounts of gas and dust contained within them. Only ~2% of the mass of Sa spiral galaxies is in the form of gas and dust. Since these are essential ingredients in the formation of new stars, this means that a relatively small proportion of Sa galaxies are have active starSelf-luminous object held together by its own self-gravity. Often refers to those objects which generate energy from nuclear reactions occurring at their cores, but may also be applied to stellar remnants such as neutron stars. formation. Consequently, these galaxies are dominated by large bulges of old stars and relatively small disks containing faint, smooth, tightly wound arms. In contrast, Sc spirals contain ~15% gas and dust; a relatively high proportion of the galactic mass is involved in star formation. Sc galaxies have small bulges and are dominated by loosely wound arms that are often resolved into clumps of stars and HII regions. The proportion of young stars increases from Sa to Sc galaxies.

Spiral galaxies range in size from 5–100 kpc across, have masses of 109-1012 Msun, and luminosities of 108-1011 Lsun. Most spiral galaxies rotate in the sense that the arms trail the direction of the spin. The measuring rotation curves of spiral galaxies indicate that the orbital speed of material in the disk does not decline as expected were most of a galaxy’s mass concentrated near its center. This indicates the visible portion of spiral galaxies contains only a small fraction of the total mass of the galaxy, and that spiral galaxies are surrounded by an extensive halo consisting mostly of dark matterForm of matter that does not emit light, absorb light, or otherwise interact with electromagnetic radiation. Its only interactions are gravitational and dark matter particles can clump under the force of gravity (unlike "dark energy" which is evenly distributed throughout space). The existence of dark matter has been inferred from. 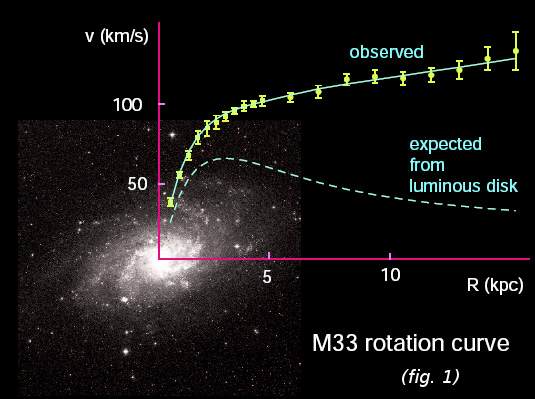