Characteristic feature of all spiral galaxies, a concentration of stars sweeping out from either the central bulge or the ends of the galactic barUnit of pressure equal to 100 kPa.. Grand design spirals (e.g., M51) have long, narrow, well defined arms, while those galaxies with short, fragmented arms are termed flocculent spirals. The persistence of galactic spiral arms indicates that they are neither rigid nor permanent structures, because they have not been wound up by differential rotation of the galaxyConcentration of 106 to 1012 stars, dust and gas, that are gravitationally bound. Our galaxy contains ~2 × 1011 stars. There are four main types of galaxies: • Elliptical
• Lenticular
• Spiral
• Irregular
. Some galaxies have a well-organized spiral structure (grand design spirals), while others are patchy (flocculent spirals). The arms may be wound tightly around the galaxy or may be more open. Some spiral arms originate at the end of bars, others directly from the galactic bulge.

All spiral arms lie within the thin diskThe defining morphological component of disk galaxies in general and spiral galaxies in particular. The thin disk contains stars, star clusters, gas and dust confined to the galaxy's plane of rotation. There is much more information on the disk of the Milky Way than for spiral galaxies, but the disk of a galaxy, delineated by dark dust lanes and highlighted by young, blue stars and luminous nebulaeAn immense interstellar, diffuse cloud of gas and dust from which a central star and surrounding planets and planetesimals condense and accrete. The properties of nebulae vary enormously and depend on their composition as well as the environment in which they are situated. Emission nebula are powered by young, massive (HII regions). They range from being tightly wound, faint and smooth in galaxies with little gas and dust, to more open, brighter and clumpy in galaxy with higher percentages of interstellar material. Most young stars form within spiral arms. The more gas and dust available, the more of a galaxy will be involved in starSelf-luminous object held together by its own self-gravity. Often refers to those objects which generate energy from nuclear reactions occurring at their cores, but may also be applied to stellar remnants such as neutron stars. formation. Galaxies with high rates of star formation tend to be dominated by their spiral arms and have relatively small central bulges. Spiral galaxies with very little gas and dust are dominated by their central bulge of older stars and generally have fainter spiral arms. In these galaxies, star formation is not vigorous enough to form clusters of luminous stars so their arms also tend to be smoother.

Two main models exist to explain the origin of spiral arms. In the densityMass of an object divided by its volume. Density is a characteristic property of a substance (rock vs. ice, e.g.). Some substances (like gases) are easily compressible and have different densities depending on how much pressure is exerted upon them. The Sun is composed of compressible gases and is much wavePropagating disturbance which transmits energy from one point to another without physically transporting the oscillating quantity. A wave is characterized by wavelength and frequency. model, the spiral arms represent regions in the galactic disk that are denser than average. As the dust and gas piles up in these overdense regions, star formation is triggered, resulting in the neat, ordered arms of grand design spirals. In the self-propagating star formation model, regions of star formation are stretched into spiral patterns by the differential rotation of the galaxy. These regions of star formation are only temporary, appearing and disappearing on timescales much shorter than the life of the galaxy. This model is complimentary to the density wave model and is successful in explaining the origins of the more patchy flocculent spirals. Astronomers now think that a combination of both models may be at work. 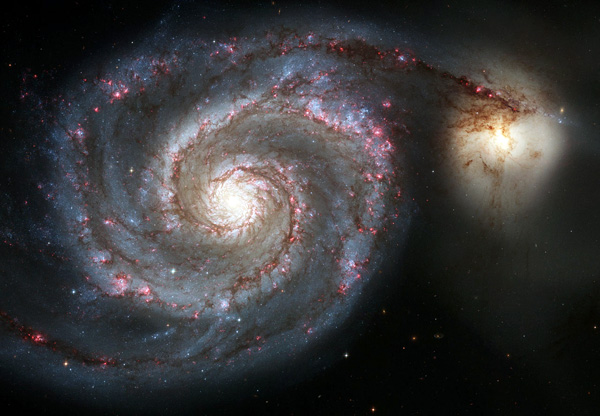