Position of the sunOur parent star. The structure of Sun's interior is the result of the hydrostatic equilibrium between gravity and the pressure of the gas. The interior consists of three shells: the core, radiative region, and convective region. Image source: http://eclipse99.nasa.gov/pages/SunActiv.html. The core is the hot, dense central region in which the when farthest north (summer solstice) or farthest south (winter solstice). The solstices occur because the rotation axis of the Earth is tilted by an angle of 23.5° from the vertical. If the Earth’s rotation axis were perpendicular to the plain of its orbitThe elliptical path of one body around another, typically the path of a small body around a much larger body. However, depending on the mass distribution of the objects, they may rotate around an empty spot in space • The Moon orbits around the Earth. • The Earth orbits around, there were be no solstice days and no seasons. The Sun attains its most northerly declination (+23.5°) around 21 June; this is the northern summer solstice and marks the longest day of the year for northern hemisphere observers. This is also the date of the southern winter solstice (shortest day of the year for southern hemisphere observers). Six months later, the Sun reaches its most southerly declination (-23.5°) and the solstices are reversed in each hemisphere. 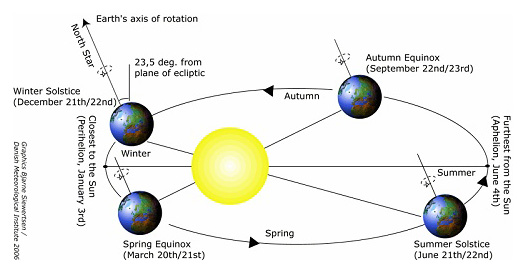