Amount of elements in the SunOur parent star. The structure of Sun's interior is the result of the hydrostatic equilibrium between gravity and the pressure of the gas. The interior consists of three shells: the core, radiative region, and convective region. Image source: http://eclipse99.nasa.gov/pages/SunActiv.html. The core is the hot, dense central region in which the as determined by spectral line intensities. Approximately 60 elements have been identified; the most abundant are listed in the table. 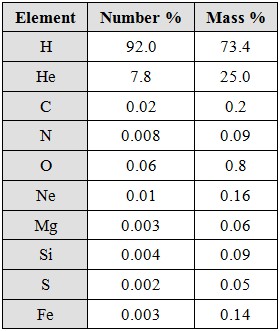