First mission to orbitThe elliptical path of one body around another, typically the path of a small body around a much larger body. However, depending on the mass distribution of the objects, they may rotate around an empty spot in space • The Moon orbits around the Earth. • The Earth orbits around an asteroid (see http://near.jhuapl.edu/). The spacecraft carried instruments, including a multi-Spectral Imager (MSI) used to determine Eros’s shape and surface features, and mineralInorganic substance that is (1) naturally occurring (but does not have a biologic or man-made origin) and formed by physical (not biological) forces with a (2) defined chemical composition of limited variation, has a (3) distinctive set of of physical properties including being a solid, and has a (4) homogeneous distributions. Other instruments determines the distribution and abundance of surface minerals like olivineGroup of silicate minerals, (Mg,Fe)2SiO4, with the compositional endpoints of forsterite (Mg2SiO4) and fayalite (Fe2SiO4). Olivine is commonly found in all chondrites within both the matrix and chondrules, achondrites including most primitive achondrites and some evolved achondrites, in pallasites as large yellow-green crystals (brown when terrestrialized), in the silicate portion and pyroxeneA class of silicate (SiO3) minerals that form a solid solution between iron and magnesium and can contain up to 50% calcium. Pyroxenes are important rock forming minerals and critical to understanding igneous processes. For more detailed information, please read the Pyroxene Group article found in the Meteoritics & Classification category., searched for induced magnetic fields, and used laser ranging to construct topographic profiles. The NEAR spacecraft passed within 1225 km of the asteroid 253 Mathilde, a C-type carbon-rich asteroid, on its trip to Eros and acquired images and determined its mass to an accuracy of ~5%. After a year of orbiting Eros, the spacecraft croshed on the asteroid’s surface in February 2001, after transmitting close-up images of the surface during its final descent. 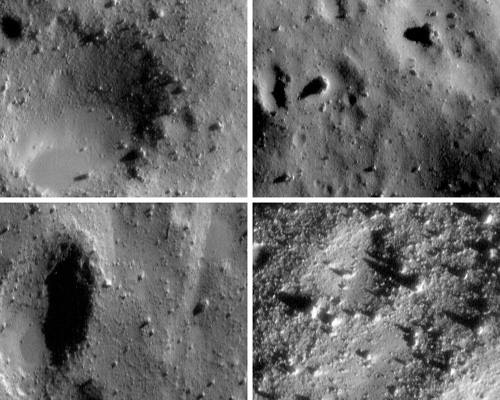