Chemical bondStrong attractive force between atoms that holds the atoms close together in space. formed by electrostatic attraction resulting when one atom “donates” valenceCharge on an ion reflecting gained or lost electrons. For example, an iron atom that has lost two electron, Fe2+, is described as having a valence of 2. Typical valences in geological materials are shown below. electron(s) to another atom, resulting in filled energy shells for both atoms involved in the interaction. This is most common in atoms with differences in electronegativity >2. The electrons originally from the donor atom move to the vicinity of the other “acceptor” atom, binding the atoms together. The bonding of MgO is shown below. 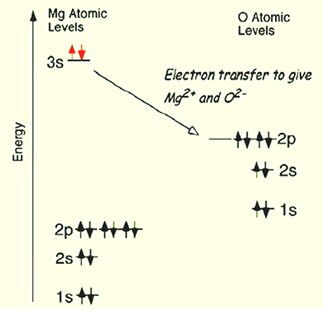 Very few materials have bonds that are truly ionic; most ionic bonds are, at least, partially covalent. The fraction of ionic character of a bond, f, can be estimated from the electronegativities of the two atoms. 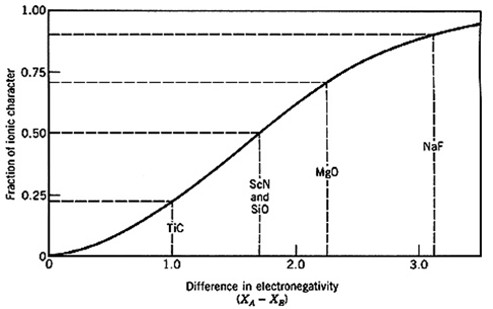