Relatively rare variety of iron meteoriteMeteorite composed mainly of iron (Fe) and nickel (Ni) in the form of two alloys, kamacite and taenite. Due to their metallic makeup and extraordinary weight, iron meteorites are easily distinguished from ordinary rocks. Also, because they rarely break up in the air and suffer much less from the effects (designated type D) made almost entirely of taeniteLess common than kamacite, both taenite and kamacite are Ni-Fe alloys found in iron meteorites. Taenite, γ-(Fe,Ni), has 27-65 wt% Ni, and forms small crystals that appear as highly reflecting thin ribbons on the etched surface of a meteorite; the name derives from the Greek word for "ribbon.", a solid solutionCompositional variation resulting from the substitution of one ion or ionic compound for another ion or ionic compound in an isostructural material. This results in a mineral structure with specific atomic sites occupied by two or more ions or ionic groups in variable proportions. Solid solutions can be complete (with of Fe and 27 to 65% Ni. The Greek name means “without structure” and refers to the lack of a visible Widmanstätten patternCharacteristic cross-hatched pattern visible on the surface of octahedrites, pallasites and even large metal blebs in chondrite melts and mesosiderite nodules after polishing and etching with an acid solution like nital (nitric acid in solution with ethanol). The acid will preferentially etch the iron based on its nickel content - (spindles of kamaciteMore common than taenite, both taenite and kamacite are Ni-Fe alloys found in iron meteorites. Kamacite, α-(Fe,Ni), contains 4-7.5 wt% Ni, and forms large body-centered cubic crystals that appear like broad bands or beam-like structures on the etched surface of a meteorite; its name is derived from the Greek word are visible only microscopically).

“Iron meteorites containing >16% Ni nucleate kamacite at such low temperatures that large single crystals could not form over the 4.55 billion years of solar systemThe Sun and set of objects orbiting around it including planets and their moons and rings, asteroids, comets, and meteoroids. history; they lack a Widmanstätten pattern and are called Ni-rich ataxites (i.e. without structure). The Ni-poor ataxites are hexahedrites or octahedrites reheated in massive impacts, or artificially after they fell on Earth.” https://www.sciencedirect.com/topics/earth-and-planetary-sciences/taenite

Need more info as “Classification and Properties of Iron Meteorites” (https://www.higp.hawaii.edu/~escott/Scott%20n%20Wasson%201976%20rev%20irons.pdf) says Fine plessiteA fine-grained intergrowth of kamacite and taenite that fills in the wedges between wide kamacite and taenite bands in octahedrites. The name derives from the Greek word for "filling.", generally some isolated kamacite platelets 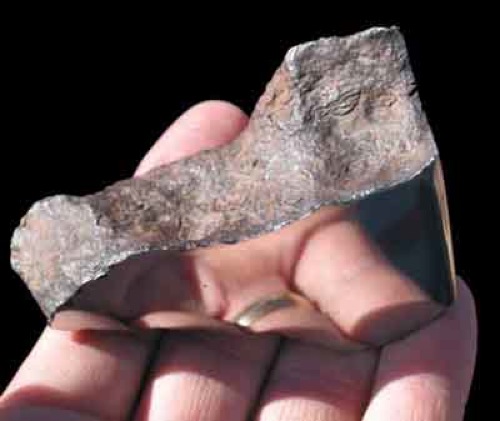 Chinga ataxite MeteoriteWork in progress. A solid natural object reaching a planet’s surface from interplanetary space. Solid portion of a meteoroid that survives its fall to Earth, or some other body. Meteorites are classified as stony meteorites, iron meteorites, and stony-iron meteorites. These groups are further divided according to their mineralogy and (lacks Widmanstätten beacuseof its Ni content). Image source: http://www.arizonaskiesmeteorites.com/Widmanstatten/.