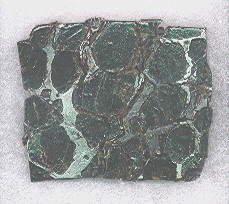 Found ~1868, recognized 1902
36° 56′ N., 87° 24′ W. A mass of 351 pounds was found on the farm of Capt. S. Fruit, about 7 miles northeast of Hopkinsville, Kentucky, but it was not recognized as a meteoriteWork in progress. A solid natural object reaching a planet’s surface from interplanetary space. Solid portion of a meteoroid that survives its fall to Earth, or some other body. Meteorites are classified as stony meteorites, iron meteorites, and stony-iron meteorites. These groups are further divided according to their mineralogy and until 1902. During the intervening years, the owner had used the meteorite as a boot scraper, and had finally sent a sample to E. Ulrich, of the U.S. Geological Survey, but only when the increasing price of zinc and lead made him curious about its true nature. Mr. Ulrich subsequently acquired the specimen for the U.S. National Museum. The Catalogue of Meteorites fourth edition lists Mount Vernon as a fallMeteorite seen to fall. Such meteorites are usually collected soon after falling and are not affected by terrestrial weathering (Weathering = 0). Beginning in 2014 (date needs confirmation), the NomComm adopted the use of the terms "probable fall" and "confirmed fall" to provide better insight into the meteorite's history. If during the year 1868, but this claim is in question. Only Marjalahti, Omolon, and Zaisho are undisputed pallasite falls.

An extended terrestrial exposure has led to significant oxidationOxidation and reduction together are called redox (reduction and oxidation) and generally characterized by the transfer of electrons between chemical species, like molecules, atoms or ions, where one species undergoes oxidation, a loss of electrons,  while another species undergoes reduction, a gain of electrons. This transfer of electrons between reactants of the exterior of the mass, which measured 33 × 36 × 55 cm when acquired by the museum. Mount Vernon is composed of unusually large and compact blebs of olivineGroup of silicate minerals, (Mg,Fe)2SiO4, with the compositional endpoints of forsterite (Mg2SiO4) and fayalite (Fe2SiO4). Olivine is commonly found in all chondrites within both the matrix and chondrules, achondrites including most primitive achondrites and some evolved achondrites, in pallasites as large yellow-green crystals (brown when terrestrialized), in the silicate portion ranging from 5 mm to 25 mm in diameter with only a minimal network of FeNi-metal containing thin veinlets of phosphide. It was estimated by E. R. D. Scott (1977) that the size of the largest olivine grains in Mount Vernon reached a size of at least 30 cm. This pallasite is much less stable to terrestrial oxidation than many others. The specimen pictured above is a 24.5 g partial slice, which unfortunately has experienced further deterioration during its residence in humid Florida. The photo below shows a 1,507 g partial slice, which was acquired by the owner from the Robert Haag Collection, previously obtained from the United States National Museum, Smithsonian Institution. Synopses of several different proposed formation histories of the main-group pallasites can be found on the Imilac page. 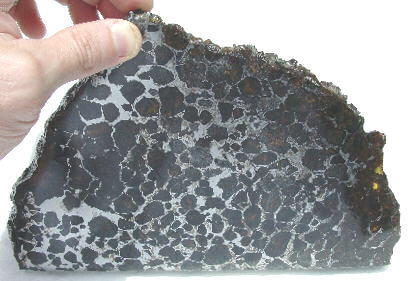