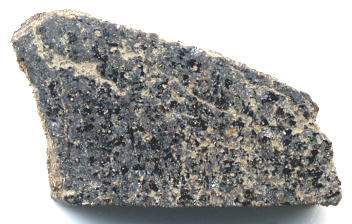 Purchased 2004
no coordinates recorded A 386 g meteoriteWork in progress. A solid natural object reaching a planet’s surface from interplanetary space. Solid portion of a meteoroid that survives its fall to Earth, or some other body. Meteorites are classified as stony meteorites, iron meteorites, and stony-iron meteorites. These groups are further divided according to their mineralogy and was found in the Sahara Desert in 2003. This was later determined to be part of an ~7.5 kg mass, which, along with other recovered fragments, compose a meteorite with a total weight of ~10 kg. The 386 g fragment was purchased by N. Oakes from a Moroccan dealer, and a sample was submitted for analysis and classification (T. Bunch and J. Wittke, NAU; A. Irving, UWS; D. Rumble III, CIW). Northwest Africa 2656 was determined to be an acapulcoite, exhibiting a recrystallized, polygonal, granular texture. Portions of this meteorite have been analyzed by NAU under several different names, including at least NWA 2699 (1,294 g), NWA 2714 (100 g), NWA 2866 (213 g), and NWA 2871 (3,467 g). As a member of the lodranite/acapulcoite group, NWA 2656 has been distinguished from the members of the winonaitea partially differentiated asteroid that was disrupted just as it began to form an Fe core and a silicate-rich crust. This disrupting impact mixed silicates into molten Ni-Fe metal forming the silicated IAB irons, and mixed olivine-rich residues of partial melts into unmelted silicates, forming the winonaites. A few winonaites group, which exhibits similar recrystallized textures, through a plot of the Fa content of olivineGroup of silicate minerals, (Mg,Fe)2SiO4, with the compositional endpoints of forsterite (Mg2SiO4) and fayalite (Fe2SiO4). Olivine is commonly found in all chondrites within both the matrix and chondrules, achondrites including most primitive achondrites and some evolved achondrites, in pallasites as large yellow-green crystals (brown when terrestrialized), in the silicate portion vs. the Δ17O-isotopic value. From this diagram, it is apparent that these two groups plot in separate regions, and NWA 2656 is clearly resolved within the lodranite/acapulcoite group (D. Rumble, III et al., 2005). Northwest Africa 2656 consists of orthopyroxeneOrthorhombic, low-Ca pyroxene common in chondrites. Its compositional range runs from all Mg-rich enstatite, MgSiO3 to Fe-rich ferrosilite, FeSiO3. These end-members form an almost complete solid solution where Mg2+ substitutes for Fe2+ up to about 90 mol. % and Ca substitutes no more than ~5 mol. % (higher Ca2+ contents occur, olivine, and plagioclaseAlso referred to as the plagioclase feldspar series. Plagioclase is a common rock-forming series of feldspar minerals containing a continuous solid solution of calcium and sodium: (Na1-x,Cax)(Alx+1,Si1-x)Si2O8 where x = 0 to 1. The Ca-rich end-member is called anorthite (pure anorthite has formula: CaAl2Si2O8) and the Na-rich end-member is albite, along with minor FeNi-metal, troiliteBrass colored non-magnetic mineral of iron sulfide, FeS, found in a variety of meteorites., schreibersiteNi-Fe phosphide mineral, (Fe,Ni)3P, yellowish in color and predominantly found in iron and stony-iron meteorites. Schreibersite can also be found in a variety of other meteorites including some acapulcoites, aubrites, enstatite chondrites and achondrites, lunars, ureilites, winonaites and a smattering of other meteorite types like CM, CO and CB. Schreibersite, Cr-diopside, and chromiteBrownish-black oxide of chromium and iron (Cr-Fe oxide), Cr2FeO4, found in many meteorite groups., and exhibits a grain size of <1 mm. This meteorite has been shocked to stage S2 and has been weathered to grade W3. A division of the acapulcoite–lodranite meteorite clan based on metamorphicRocks that have recrystallized in a solid state due to changes in temperature, pressure, and chemical environment. stage was proposed by Floss (2000) and Patzer et al. (2003).

Because both acapulcoites and lodranites are derived from the same parent bodyThe body from which a meteorite or meteoroid was derived prior to its ejection. Some parent bodies were destroyed early in the formation of our Solar System, while others like the asteroid 4-Vesta and Mars are still observable today. and have the same O-isotopic ratios, the plagioclase content in this meteorite is an important factor in making the distinction between acapulcoite and lodranite. Lodranites contain no plagioclase (or only trace amounts) since it was depleted from the restite during the partial melt phase. The two groups also have similar mineralogies, thermal histories, and cosmic ray exposure ages. Additionally, lodranites and acapulcoites have identical cosmogenic nuclideA nuclear species characterized by Z protons and N neutrons. abundances and similar shielding conditions. Another factor which distinguishes acapulcoites from lodranites is their grain size. The grain size of NWA 2656 is more consistent with the finer-grained acapulcoites than with the coarser-grained lodranites—the division has been established by some at 500 µm, and the average grain size of NWA 2656 is 400 µm; however, further studies indicate an average grain size for portions of this meteorite of 0.6–0.7 mm, consistent with a lodranite classification. With many more samples to study, it is now evident that a continuum exists for the grainsizes of these two groups, and it has been proposed by Bunch et al. (2011) that an arbitrary group division is no longer justified; the term ‘acapulcoite–lodranite clan’ should therefore be applied to all members of the combined group.

For more complete amd current formation scenarios of the acapulcoite–lodranite parent body, visit the Monument Draw and Lodran pages. The specimen shown above is a partial slice of NWA 2656 weighing 1.21 g.