Enstatite achondriteUsed in past as synonym for Aubrites. Present definition from the Meteoritical Bulletin states that this rare class is an "enstatite-rich  achondrite  that has not yet been classified into a group"., ungroupedModifying term used to describe meteorites that are mineralogically and/or chemically unique and defy classification into the group or sub-group they most closely resemble. Some examples include Ungrouped Achondrite (achondrite-ung), Ungrouped Chondrite (chondrite-ung), Ungrouped Iron (iron-ung), and Ungrouped Carbonaceous (C-ung). 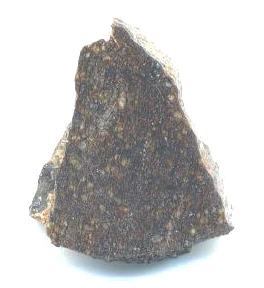 Purchased August 2003
no coordinates recorded A single, partially-crusted, achondriteAn achondrite is a type of stony meteorite whose precursor was of chondritic origin and experienced metamorphic and igneous processes. They have a planetary or differentiated asteroidal origin where the chondritic parent body reached a sufficient size that through heating due to radioactive decay of 26Al (aluminum isotope) and gravitational weighing 132.8 g was purchased from a Moroccan dealer in Erfoud, Morocco. The stone was subsequently sold to American collector N. Oakes. A portion of the meteoriteWork in progress. A solid natural object reaching a planet’s surface from interplanetary space. Solid portion of a meteoroid that survives its fall to Earth, or some other body. Meteorites are classified as stony meteorites, iron meteorites, and stony-iron meteorites. These groups are further divided according to their mineralogy and was sent to Northern Arizona University for classification (T. Bunch and J. Wittke), and it was determined that NWA 1840 is a brecciated, enstatiteA mineral that is composed of Mg-rich pyroxene, MgSiO3. It is the magnesium endmember of the pyroxene silicate mineral series - enstatite (MgSiO3) to ferrosilite (FeSiO3). orthopyroxeniteA rock composed primarily of orthopyroxene. Non-terrestrial orthopyoxenites include diogenites and a single martian meteorite, ALH 84001, that was found in the Allan Hills region of Antarctica in 1984. ALH 84001 is a cumulate rock consisting of 97% coarse-grained, Mg-rich orthopyroxene, with small amounts of plagioclase, chromite, and carbonate. It shocked to stage S3/4 and weathered to grade W2/3, the weathering mostly limited to those ares that border fractures. The meteorite exhibits tiny parallel compression fractures throughout the mass (see photo below).

The table reveals that many similarities exist between NWA 1840 and Shallowater, and that there are significant differences in the compositions of both NWA 1840 and Shallowater compared to most other aubrites. NWA 1840 and Shallowater both contain a large Si-kamacite component, a large plagioclaseAlso referred to as the plagioclase feldspar series. Plagioclase is a common rock-forming series of feldspar minerals containing a continuous solid solution of calcium and sodium: (Na1-x,Cax)(Alx+1,Si1-x)Si2O8 where x = 0 to 1. The Ca-rich end-member is called anorthite (pure anorthite has formula: CaAl2Si2O8) and the Na-rich end-member is albite component, and are depleted in diopside and sulfides. However, unlike NWA 1840, Shallowater is unbrecciated (similar only to E-achondrite Mt. Egerton) and has a unique composition of primarily coarse-grained orthoenstatite (ordered orthopyroxeneOrthorhombic, low-Ca pyroxene common in chondrites. Its compositional range runs from all Mg-rich enstatite, MgSiO3 to Fe-rich ferrosilite, FeSiO3. These end-members form an almost complete solid solution where Mg2+ substitutes for Fe2+ up to about 90 mol. % and Ca substitutes no more than ~5 mol. % (higher Ca2+ contents occur) crystals (~80 vol%). Also unlike NWA 1840, Shallowater contains a component of xenolithic material (~20 vol%) which represents the melt-entrapped remnants of a solid impactor. This xenolithic material is present in interstices and as inclusions in the orthoenstatite, and is composed (vol%) of weathered opaques (8), FeNi-metal (3.3), troiliteBrass colored non-magnetic mineral of iron sulfide, FeS, found in a variety of meteorites. (2.9), forsteritePure* magnesium end-member (Mg2SiO4) of the olivine solid solution series and an important mineral in meteorites. When magnesium (Mg) is completely substituted by iron, it yields the the pure Fe-olivine end member, fayalite (Fe2SiO4). The various Fe and Mg substitutions between these two end-members are described based on their forsteritic (Fo) (2.9), plagioclase (2.5), low-Ca clinoenstatite (1), and schreibersiteNi-Fe phosphide mineral, (Fe,Ni)3P, yellowish in color and predominantly found in iron and stony-iron meteorites. Schreibersite can also be found in a variety of other meteorites including some acapulcoites, aubrites, enstatite chondrites and achondrites, lunars, ureilites, winonaites and a smattering of other meteorite types like CM, CO and CB. Schreibersite (0.4), along with traces of niningerite and oldhamiteMn-Ca sulfide, (Mn,Ca)S, is a pale to dark brown accessory mineral found in minor amounts in highly reduced meteorites such as many enstatite chondrites, and some aubrites and enstatite achondrites. Oldhamite in enstatite chondrites likely formed by solar nebular gas condensation. CaS Oldhamite was also found in the most fresh (Keil, et al., 1989).

Previous petrologic, mineralogic, and geochemical investigations relating to Shallowater, the aubrites, and the EH and EL chondritesChondrites are the most common meteorites accounting for ~84% of falls. Chondrites are comprised mostly of Fe- and Mg-bearing silicate minerals (found in both chondrules and fine grained matrix), reduced Fe/Ni metal (found in various states like large blebs, small grains and/or even chondrule rims), and various refractory inclusions (such have established that these meteorite groups probably represent four distinct planetesimalsHypothetical solid celestial body that accumulated during the last stages of accretion. These bodies, from ~1-100 km in size, formed in the early solar system by accretion of dust (rock) and ice (if present) in the central plane of the solar nebula. Most planetesimals accreted to planets, but many – that formed in a similar region of the Solar SystemThe Sun and set of objects orbiting around it including planets and their moons and rings, asteroids, comets, and meteoroids. ~4.566 b.y. ago. Since the formation of Shallowater occurred as a result of the breakup and reassembly of its parent bodyThe body from which a meteorite or meteoroid was derived prior to its ejection. Some parent bodies were destroyed early in the formation of our Solar System, while others like the asteroid 4-Vesta and Mars are still observable today., related lithologies should be found; perhaps NWA 1840 is such a related lithology. Continued analyses of NWA 1840 will be needed to establish whether it is genetically related to Shallowater or whether NWA 1840 represents a fifth enstatite parent body. The photo shown above is a 1.08 g specimen of NWA 1840, while that below is the main massLargest fragment of a meteorite, typically at the time of recovery. Meteorites are commonly cut, sliced or sometimes broken thus reducing the size of the main mass and the resulting largest specimen is called the "largest known mass". exhibiting parallel compression fractures. 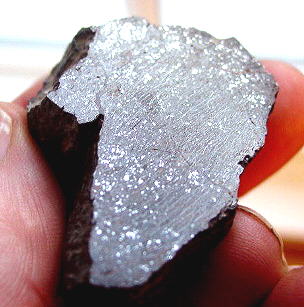