Martian ShergottiteIgneous stony meteorite with a Martian origin consisting mainly of plagioclase (or a shocked glass of plagioclase composition) and pyroxene. They are the most abundant type of SNC meteorites and the type member is the Shergotty meteorite, which fell in India in 1865. Shergottites are igneous rocks of volcanic or Click on Term to Read More
olivine-phyric ∗
(enriched, permafric, oxidizedOxidation and reduction together are called redox (reduction and oxidation) and generally characterized by the transfer of electrons between chemical species, like molecules, atoms or ions, where one species undergoes oxidation, a loss of electrons,  while another species undergoes reduction, a gain of electrons. This transfer of electrons between reactants Click on Term to Read More)

Found April 2001
no coordinates recorded One large mass of 522 g along with twenty-two additional fragments, all together weighing 576.77 g, were found by a French team in the Maarir region near the border of Morocco and Algeria. This meteoriteWork in progress. A solid natural object reaching a planet’s surface from interplanetary space. Solid portion of a meteoroid that survives its fall to Earth, or some other body. Meteorites are classified as stony meteorites, iron meteorites, and stony-iron meteorites. These groups are further divided according to their mineralogy and Click on Term to Read More was designated Northwest Africa 1068, and a sample was submitted to École Normale Supérieure de Lyon and other institutions for analysis and classification. Unaware of the analyses being conducted by the French institutions, additional paired fragments purchased in Morocco having a combined weight of 118 g were submitted to the University of Washington (Irving and Kuehner, 2002). Since the name NWA 1110 had been previously reserved from the Nomenclature Committee for these additional fragments, this meteorite will be recognized as a pairing under both names. Subsequent to this, other individual fragments were recovered in the strewnfield, some of which were submitted to the NomCom under unique NWA numbers (e.g., NWA 1183, NWA 1775, NWA 2373, NWA 2969). 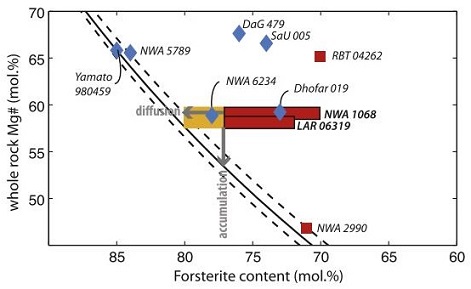 Diagram credit: Collinet et al., GCA, vol. 207, p. 294 (2017)
‘Crystallization history of enriched shergottites from Fe and Mg isotope fractionation in olivine megacrysts’
(https://doi.org/10.1016/j.gca.2017.03.029) Isotopic analyses using Sm–Nd and Rb–Sr data have determined a crystallization age for this shergottite of 185 (±11) m.y., and its CRE age has been calculated to be 2.2 (±0.2) m.y. (2.5–3.1 m.y. based on 10Be [Nishiizumi and Caffee, 2006] and 2.0 ±0.5 m.y. based on Ar systematics [Walton et al., 2007]). This CRE age is similar to several other martian meteorites, including NWA 2646, LAR 06319, and NWA 480/1460. Cosmic ray exposure ages have now been determined for many martian meteorites, and Mahajan (2015, #1166) compiled a chart based on the reported CRE ages for 53 of them. He concluded that together these 53 meteorites represent 10 distinct impact events which occurred 0.92 m.y., 2.12 m.y., 2.77 m.y., 4.05 m.y., 7.3 m.y., 9.6 m.y., 11.07 m.y., 12.27 m.y., 15 m.y., and 16.73 m.y. (see his chart here). It was argued that NWA 1068/1110 was launched from Mars during the 2.12 m.y.-old impact event. In a subsequent review based on multiple criteria, Irving et al. (2017, #2068) made a new determination of the number of separate launch events associated with the known (101 at the time of their study) martian meteorites. They speculate that the number could be as few as twenty, and suggest that NWA 1068/1110 might have been ejected with the large group of at least 26 enriched shergottites, or alternatively, it could represent a unique ejection event because of its disparate texture. Interestingly, a determination of the Pb-isotopic composition of the original source of the olivine-phyric shergottites shows a similar plot to that of the nakhlites, and these diverse martian meteorites may have originated from the same mantle reservoir (Emil et al., 2006). The specimen of NWA 1068 pictured above is a 1.19 g partial slice with a thin black impact-shock vein along the left side and a natural edge along two sides. The photo below shows the main massLargest fragment of a meteorite, typically at the time of recovery. Meteorites are commonly cut, sliced or sometimes broken thus reducing the size of the main mass and the resulting largest specimen is called the "largest known mass". Click on Term to Read More of NWA 1068. 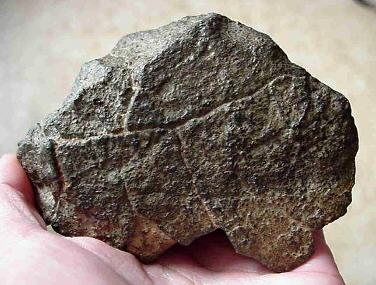