DiogeniteDiogenites belong to the evolved achondrite HED group that also includes howardites and eucrites. They are named after the Greek philosopher Diogenes of Apollonia, of the 5th century BCE, who was the first to suggest that meteorites come from outer space (a realization forgotten for over 2,000 years). They are Click on Term to Read More
OrthopyroxeniteA rock composed primarily of orthopyroxene. Non-terrestrial orthopyoxenites include diogenites and a single martian meteorite, ALH 84001, that was found in the Allan Hills region of Antarctica in 1984. ALH 84001 is a cumulate rock consisting of 97% coarse-grained, Mg-rich orthopyroxene, with small amounts of plagioclase, chromite, and carbonate. It Click on Term to Read More
(≥90 vol% orthopyroxeneOrthorhombic, low-Ca pyroxene common in chondrites. Its compositional range runs from all Mg-rich enstatite, MgSiO3 to Fe-rich ferrosilite, FeSiO3. These end-members form an almost complete solid solution where Mg2+ substitutes for Fe2+ up to about 90 mol. % and Ca substitutes no more than ~5 mol. % (higher Ca2+ contents occur Click on Term to Read More) 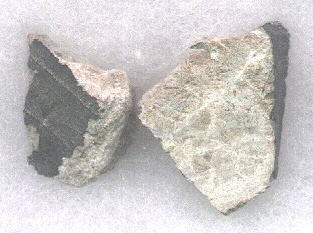 Fell October 27, 1999
12° 27′ N., 0° 05′ W. At 10:30 A.M. local time a shower of rare diogeniteDiogenites belong to the evolved achondrite HED group that also includes howardites and eucrites. They are named after the Greek philosopher Diogenes of Apollonia, of the 5th century BCE, who was the first to suggest that meteorites come from outer space (a realization forgotten for over 2,000 years). They are Click on Term to Read More meteorites fell in the villages of Bilanga Yanga and Gomponsago, Burkina Faso, Africa. The total weight is more than 25 kg, including a 7.5 kg oriented mass with centrally radiating flow lines. Mineralogical analyses performed at the Institut für Planetologie, Münster, Germany, has determined that Bilanga is a diogenite.

Bilanga consists of calcium-poor orthopyroxene crystals broken up in a brecciated matrixFine grained primary and silicate-rich material in chondrites that surrounds chondrules, refractory inclusions (like CAIs), breccia clasts and other constituents. Click on Term to Read More containing aggregates of diopside and plagioclaseAlso referred to as the plagioclase feldspar series. Plagioclase is a common rock-forming series of feldspar minerals containing a continuous solid solution of calcium and sodium: (Na1-x,Cax)(Alx+1,Si1-x)Si2O8 where x = 0 to 1. The Ca-rich end-member is called anorthite (pure anorthite has formula: CaAl2Si2O8) and the Na-rich end-member is albite Click on Term to Read More, associated with chromiteBrownish-black oxide of chromium and iron (Cr-Fe oxide), Cr2FeO4, found in many meteorite groups. Click on Term to Read More, troiliteBrass colored non-magnetic Fe sulfide, FeS, found in a variety of meteorites., and silicaSilicon dioxide, SiO2.. These assemblages represent cumulates formed by late-stage fractional crystallizationA crystallization process in which minerals crystallizing from a magma are isolated from contact with the liquid. It is a key process in the formation of igneous rocks during the process of magmatic differentiation. Also known as crystal fractionation. Click on Term to Read More of a melt, followed by slow cooling and thermal metamorphism. Trapped melt inclusions consisting of these same components also occur between orthopyroxene grains, likewise sampling a late-stage intercumulus melt. The silica-rich mesostasisLast material to crystallize/solidify from a melt. Mesostasis can be found in both chondrules, in the matrix around chondrules, and in achondrites as interstitial fine-grained material such as plagioclase, and/or as glass between crystalline minerals.   Click on Term to Read More is enriched in KREEPLunar igneous rock rich in potassium (K), rare-earth elements (REE), phosphorus (P), thorium, and other incompatible elements. These elements are not incorporated into common rock-forming minerals during magma crystallization, and become enriched in the residual magma and the rocks that ultimately crystallize from it. Click on Term to Read More. A single grain of native copper has been observed adjacent to a large tetrataenite grain, and plagioclase-rich clasts occur which are thought to represent an exotic rock type, possibly associated with the silica-rich mesostasis (Domanik et al., 2004). Non-cumulate textured zones which exhibit localized shock-melting and rapid recrystallization are present.

Oxygen-isotopic studies carried out at the Enrico–Fermi Institute, University of Chicago, Illinois, indicate that Bilanga is closely related to the Shalka diogenite, and Shalka has been found to have similarities to Tatahouine. However, while both Shalka and Tatahouine have a similar CRE age coinciding with a major HED peak at 38 m.y., Bilanga has a CRE age of 49 m.y., coinciding with a lesser HED peak. Since this peak at ~50 m.y. is shared by the Garland and GRO 95555 diogenitesDiogenites belong to the evolved achondrite HED group that also includes howardites and eucrites. They are named after the Greek philosopher Diogenes of Apollonia, of the 5th century BCE, who was the first to suggest that meteorites come from outer space (a realization forgotten for over 2,000 years). They are Click on Term to Read More, the Macibini eucriteMost common type of achondrite meteorite and a member of the HED group. Eucrites are basalts composed primarily of pigeonite and anorthite (An60-98). Eucrites have been placed into three subgroups based on mineralogical and chemical differences. • Non-cumulate eucrites represent the upper crust that solidified on a magma ocean after Click on Term to Read More, and possibly the Yurtuk howarditeOne type of meteorite in the HED (Howardite, Eucrite, Diogenite) achondrite group. Howardites are named after the English chemist Edward Howard (1774-1816), one of the pioneers of meteoritics. Consisting mostly of eucritic and diogenitic clasts and fragments, howardites are polymict breccias. However, they can also contain dark clasts of carbonaceous Click on Term to Read More, the CRE age of Bilanga strengthens the case for an impact event on the HED parent bodyThe body from which a meteorite or meteoroid was derived prior to its ejection. Some parent bodies were destroyed early in the formation of our Solar System, while others like the asteroid 4-Vesta and Mars are still observable today. Click on Term to Read More ~50 m.y. ago.

A different relationship has been shown to exist among Bilanga, GRA 98108, MET 00425, and Manegaon. These four diogenites are Sc-poor and Sm-rich, and their pyroxenes have the highest magnesium contents among the diogenites. Correlations among these parameters are consistent with a co-magmatic origin within an igneously fractionated cumulateIgneous rock composed of crystals that have grown and accumulated (often by gravitational settling) in a cooling magma chamber. Click on Term to Read More pile. An alternative viewpoint was presented by Barrat et al. (2010) based on the fact that orthopyroxenes in Bilanga exhibit similar REEOften abbreviated as “REE”, these 16 elements include (preceded by their atomic numbers): 21 scandium (Sc), 39 Yttrium (Y) and the 14 elements that comprise the lanthanides excluding 61 Promethium, an extremely rare and radioactive element. These elements show closely related geochemical behaviors associated with their filled 4f atomic orbital. Click on Term to Read More patterns and light REE depletions as the Johnstown, Roda, A-881548, and Dhofar 700 diogenites, possibly constituting a subgroup. The investigators argue that this group of diogenites all having very low Eu/Eu* ratios were contaminated by <10% of a low degree (<5%) eucritic crustal melt phase associated with a very large Eu anomaly. This scenario would be consistent with diogenites forming concurrent with or later than the formation of eucritesMost common type of achondrite meteorite and a member of the HED group. Eucrites are basalts composed primarily of pigeonite and anorthite (An60-98). Eucrites have been placed into three subgroups based on mineralogical and chemical differences. • Non-cumulate eucrites represent the upper crust that solidified on a magma ocean after Click on Term to Read More.

For more details on the formation of diogenites visit the Johnstown page. To see an alternative classification systemDefinable part of the universe that can be open, closed, or isolated. An open system exchanges both matter and energy with its surroundings. A closed system can only exchange energy with its surroundings; it has walls through which heat can pass. An isolated system cannot exchange energy or matter with for the diogenites based on mineralogical and petrographical features, proposed by Beck and McSween (2010) and modified by Wittke et al. (2011), click here. A petrographic thin sectionThin slice or rock, usually 30 µm thick. Thin sections are used to study rocks with a petrographic microscope. micrograph of Bilanga can be seen on J. Kashuba’s page. In the photo above, the specimen on the right is a 5.5 g partial slice and on the left a 4.4 g fragment showing two parallel flow ribs. The top photo below shows the 7.5 kg main massLargest fragment of a meteorite, typically at the time of recovery. Meteorites are commonly cut, sliced or sometimes broken thus reducing the size of the main mass and the resulting largest specimen is called the "largest known mass". Click on Term to Read More, and below that is its cut face. The final photo below shows a Bilanga specimen with parallel shock veins rarely seen in this diogenite. 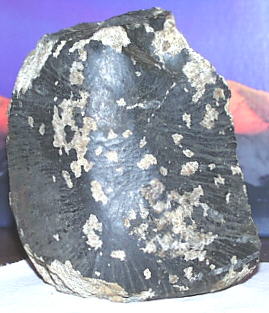 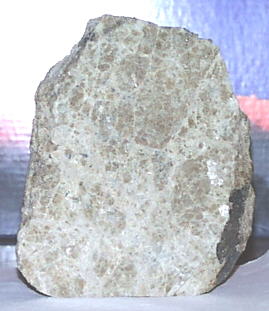 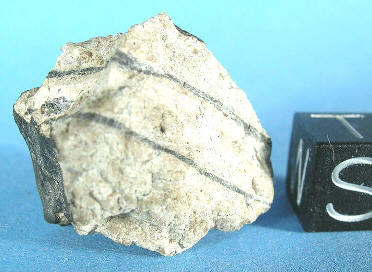