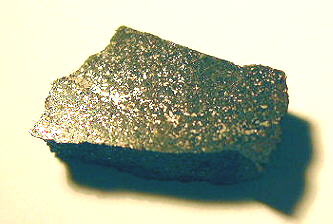 Found 1969
31° 11′ 30′ S., 121° 32′ E. In 1969, numerous fragments were found in a shallow depression during nickel exploration in Western Australia. They were not recognized as meteoritic until 1971, when a single large mass with ablationGradual removal of the successive surface layers of a material through various processes. • The gradual removal and loss of meteoritic material by heating and vaporization as the meteoroid experiences frictional melting during its passage through the atmosphere. The resulting plasma ablates the meteor and, in cases where a meteor characteristics, along with smaller fragments totaling 24 kg, was found 400 m from the first findMeteorite not seen to fall, but recovered at some later date. For example, many finds from Antarctica fell 10,000 to 700,000 years ago.. Although originally described as petrologic typeMeasure of the degree of aqueous alteration (Types 1 and 2) and thermal metamorphism (Types 3-6) experienced by a chondritic meteorite. Type 3 chondrites are further subdivided into 3.0 through 3.9 subtypes. 5, all current research concludes that Yilmia is a type 6. The Van Schmus–Wood (1967) scheme for petrographic type has been modified for enstatiteA mineral that is composed of Mg-rich pyroxene, MgSiO3. It is the magnesium endmember of the pyroxene silicate mineral series - enstatite (MgSiO3) to ferrosilite (FeSiO3). chondritesChondrites are the most common meteorites accounting for ~84% of falls. Chondrites are comprised mostly of Fe- and Mg-bearing silicate minerals (found in both chondrules and fine grained matrix), reduced Fe/Ni metal (found in various states like large blebs, small grains and/or even chondrule rims), and various refractory inclusions (such, establishing both a textural type (3–7), reflecting peak metamorphicRocks that have recrystallized in a solid state due to changes in temperature, pressure, and chemical environment. temperature, and a mineralogical type (α–δ), pertaining to the cooling history (Zhang and Sears, 1996; Quirico et al., 2011). Under this classification scheme, Yilmia has thermometers that indicate a classification of EL6β. A rapid cooling phase was initiated consistent with 30,000°C/day (Kissin, 1989).

Weyrauch et al. (2018) analyzed the mineralInorganic substance that is (1) naturally occurring (but does not have a biologic or man-made origin) and formed by physical (not biological) forces with a (2) defined chemical composition of limited variation, has a (3) distinctive set of of physical properties including being a solid, and has a (4) homogeneous and chemical data from 80 enstatite chondrites representing both EH and EL groups and spanning the full range of petrologic types for each group. They found that a bimodality exists in each of these groups with respect to both the Cr content in troiliteBrass colored non-magnetic mineral of iron sulfide, FeS, found in a variety of meteorites. and the Fe concentration in niningerite and alabanditeMagnesium sulfide found in aubrites and EL chondrites. Its formula is MnS. (endmembers of the [Mn,Mg,Fe] solid solutionCompositional variation resulting from the substitution of one ion or ionic compound for another ion or ionic compound in an isostructural material. This results in a mineral structure with specific atomic sites occupied by two or more ions or ionic groups in variable proportions. Solid solutions can be complete (with series present in EH and EL groups, respectively). In addition, both the presence or absence of daubréelite and the content of Ni in kamaciteMore common than taenite, both taenite and kamacite are Ni-Fe alloys found in iron meteorites. Kamacite, α-(Fe,Ni), contains 4-7.5 wt% Ni, and forms large body-centered cubic crystals that appear like broad bands or beam-like structures on the etched surface of a meteorite; its name is derived from the Greek word were demonstrated to be consistent factors for the resolution of four distinct E chondriteChondrites are the most common meteorites accounting for ~84% of falls. Chondrites are comprised mostly of Fe- and Mg-bearing silicate minerals (found in both chondrules and fine grained matrix), reduced Fe/Ni metal (found in various states like large blebs, small grains and/or even chondrule rims), and various refractory inclusions (such groups: EHa, EHb, ELa, and ELb (see table below).

A few other E chondrites with intermediate mineralogy have also been identified, including LAP 031220 (EH4), QUE 94204 (EH7), Y-793225 (E-an), LEW 87223 (E-an), and PCA 91020 (possibly related to LEW 87223). Studies have determined that these meteorites were not derived from the EH or EL source through any metamorphic processes, and some or all of them could represent separate E chondrite asteroids. The revised E chondrite classification scheme of Weyrauch et al. (2018) including selected examples from their 80-sample study can be found here. It was determined that Yilmia is a member of the ELa subgroup.

Planetary-type noble gasesElement occurring in the right-most column of the periodic table; also called "inert" gases. In these gases, the outer electron shell is completely filled, making them very unreactive. have been identified in Yilmia, the carrier of which is thought to be a nanometer-sized phase designated phase ‘Q’ (for ‘quintessence’, including He, Ne, Ar, Kr, and Xe). Noble gases may be adsorbed at low nebular pressures onto this phase, or precursors of this phase, which is thought likely to consist of rare graphiteOpaque form of carbon (C) found in some iron and ordinary chondrites and in ureilite meteorites. Each C atom is bonded to three others in a plane composed of fused hexagonal rings, just like those in aromatic hydrocarbons. The two known forms of graphite, α (hexagonal) and β (rhombohedral), have grains, kerogen, or carbonElement commonly found in meteorites, it occurs in several structural forms (polymorphs). All polymorphs are shown to the left with * indicating that it been found in meteorites and impact structures: a. diamond*; b. graphite*; c. lonsdalite*; d. buckminsterfullerene* (C60); e. C540; f. C70; g. amorphous carbon; h. carbon nanotube*. blacks. An alternate scenario proposed by some investigators (e.g., Verchovsky et al., 2002; Matsuda et al., 2010) suggests that an amorphousMaterial without the regular, ordered structure of crystalline solids. Amorphous substances, like glass, lack a definite repeating pattern in their atomic structures (crystallinity). There may be small regions of order, but, overall there is disorder.   phase of carbon experienced implantation through ionAtom with a net electrical charge because it has lost, or gained, one or more electrons relative to the number possessed by a neutral atom of the same element. A positively charged ion (cation) has fewer electrons than a neutral atom; a negatively charged ion (anion) has more. irradiation of planetary noble gases (the ‘plasmaFourth state of matter: a gas in which many or most of the atoms are ionized. In the plasma state the atoms have split into positive ions and negative electrons, which can flow freely, so the gas becomes electrically conducting and a current can flow. model’), and that this phase now serves as the carrier of the Q-gases. These Q-gases are then released through oxidationOxidation and reduction together are called redox (reduction and oxidation) and generally characterized by the transfer of electrons between chemical species, like molecules, atoms or ions, where one species undergoes oxidation, a loss of electrons,  while another species undergoes reduction, a gain of electrons. This transfer of electrons between reactants processes resulting in a rearrangement of the carbon structure. A subsequent in-depth investigation into the carbonaceous carrier of the Q-phase was conducted by Fisenko et al. (2018) utilizing the L4 chondrite Saratov. They contend that the carrier of the Q-gases is a nongraphitizing carbon phase present as curved, few-layer, graphene-like sheets which were likely formed in the protoplanetary nebulaAn immense interstellar, diffuse cloud of gas and dust from which a central star and surrounding planets and planetesimals condense and accrete. The properties of nebulae vary enormously and depend on their composition as well as the environment in which they are situated. Emission nebula are powered by young, massive. The higher incidence of impact shock events for EL chondrites is attested by the higher prevalence of impact-melt breccias among the more metamorphosed members, as well as by the occurrence of abundant silicaSilicon dioxide, SiO2. in the form of tridymiteSilica group mineral in which the tetrahedra occur in sheets. Tetrahedra alternately point up or down to share oxygen with tetrahedra of other sheets, forming six-sided rings perpendicular the sheets. Tridymite has a fairly open structure and accommodates Na+, K+ and Ca2+; charge balance is achieved by Al3+ ↔ Si4+., cristobaliteHigh temperature polymorph of silicon dioxide (SiO2). Has the same chemical composition as coesite, stishovite, seifertite and tridymite but possesses a different crystal structure. This silica group mineral occurs in terrestrial volcanic rocks, martian and lunar meteorites, chondrites and impact glasses like Libyan Desert Glass. Cristobalite has a very open, and sinoite, the latter mineral known to crystallize from an impact melt. Following the impact-shock events, most EL6 chondrites experienced an extended period of annealing to shock stageA petrographic assessment, using features observed in minerals grains, of the degree to which a meteorite has undergone shock metamorphism. The highest stage observed in 25% of the indicator grains is used to determine the stage. Also called "shock level".               S1, which was followed by a period of less severe impact-shock events resulting in a shock stage of S2 (Rubin et al., 2009). While taeniteLess common than kamacite, both taenite and kamacite are Ni-Fe alloys found in iron meteorites. Taenite, γ-(Fe,Ni), has 27-65 wt% Ni, and forms small crystals that appear as highly reflecting thin ribbons on the etched surface of a meteorite; the name derives from the Greek word for "ribbon." is uncommon in other E chondrites, it is present in Yilmia. The photo above shows a 1.25 g partial slice of this terrestrially weathered, low-metal, enstatite chondrite.