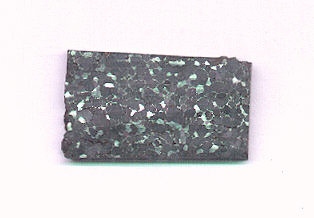 Fell ~1990
26° 35.45′ N., 12° 57.13′ W. Following a detonation with accompanying light, a stone weighing 410 g was found by a nomad in Saguia el Hamra, Western Sahara. In July of 2000, the Labenne family searched for meteorites in the same area near Itqiy, and Luc found a second stone that weighed 4,310 g. The large, smooth stone was covered with a thin, black fusion crustMelted exterior of a meteorite that forms when it passes through Earth’s atmosphere. Friction with the air will raise a meteorite’s surface temperature upwards of  4800 K (8180 °F) and will melt (ablate) the surface minerals and flow backwards over the surface as shown in the Lafayette meteorite photograph below. still exhibiting flow lines. Although this meteoriteWork in progress. A solid natural object reaching a planet’s surface from interplanetary space. Solid portion of a meteoroid that survives its fall to Earth, or some other body. Meteorites are classified as stony meteorites, iron meteorites, and stony-iron meteorites. These groups are further divided according to their mineralogy and has a low weathering grade (W1–2) consistent with a recent fallMeteorite seen to fall. Such meteorites are usually collected soon after falling and are not affected by terrestrial weathering (Weathering = 0). Beginning in 2014 (date needs confirmation), the NomComm adopted the use of the terms "probable fall" and "confirmed fall" to provide better insight into the meteorite's history. If, 14C results infer a terrestrial age for Itqiy of 5,800 (±500) years. Initial classification of Itqiy was completed at the Lunar & Planetary Laboratory, University of Arizona. 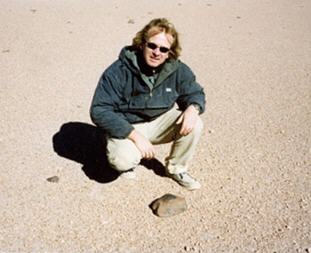