Maximas (peaks) on an energy diagramConvenient way of depicting the thermodynamics of reactions. Typically, the y-axis is given in units of energy, and the x-axis is defined as the reaction coordinate (see left). The reaction coordinate is a very general entity which you can think of as the progress of the reaction. It is similar. A transition state represents the highest energy arrangement of atoms between two more stable forms. The energy required to pass through a transition state may be called the activation energyAmount of energy that must be placed into a system to form an activated complex in a reaction. On an energy diagram, this is the difference in energy between the reactants and the transition state. The activation energy is often perceived as an energy barrier which must be overcome for, ΔGz. 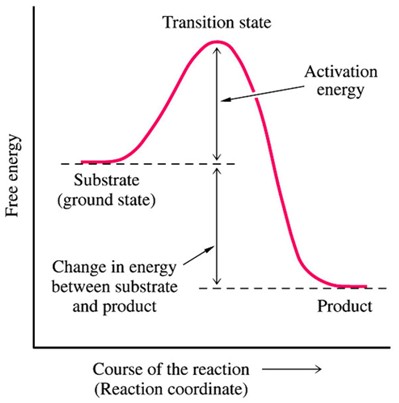